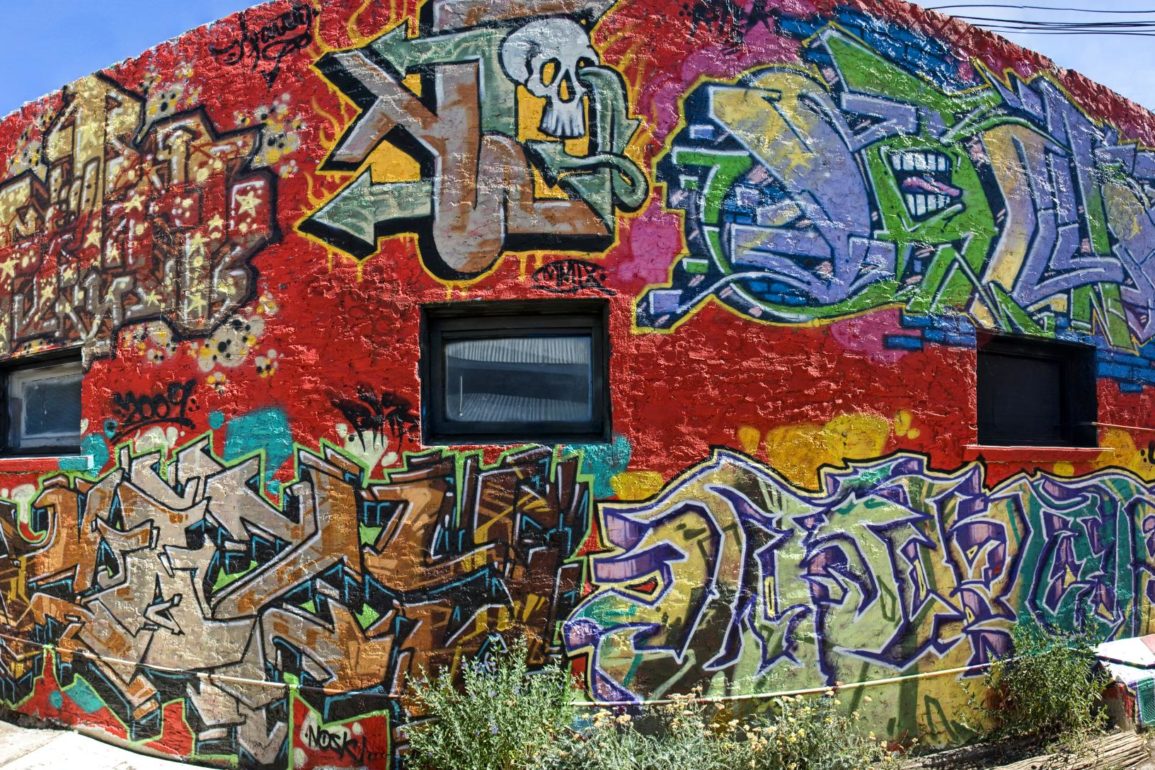 There Is Always a Graffiti Maker

In Flagstaff we checked the mileage, realized Albuquerque was only four and a half hours away. That was basically less than 2 movies. That was a tiny slice of our days. We had the longest days, didn’t we?, especially waking up early, the sun shoving through the sheer curtains in the motel room, having forgotten to smush the normal curtains closed.

Not that it mattered, because Joey kept us on schedule anyway. Joey was our matron, our den mother, our sheep dog and our shepherd and our team coach all in one: landing on top of me in the morning, then bounding over to Elyse’s bed, slopping his tongue over our faces and digging his nose into our armpits and reminding us in great amounts of glorious slobbery slime that it was time for his morning walk.

I loved walking Joey. He was no higher than my waist, but strong, always with a determination and a clear direction. Later that year, in summer, once I had made it to the East Coast and moved in with an Orthodox aspiring hip-hop DJ in a warehouse deep in Hasidic Williamsburg, I would learn from rendezvouses with kids in pizza places and kosher markets that Hasidic kids, by and large, dreaded dogs. The families had so many kids that there was no money to have pets, and no space. It puzzled me so, since the only way I managed to get up in time for morning prayers was Joey. Caring for a dog was so much like being a religious Jew: this constant presence, nagging but righteously demanding, diverting your attention away from the ego and reminding you of the miracle of Creation and the demands of a higher power.

We circled back to the row of crystal shops. They were slowly opening up, one by one, like heavy eyelids rustling up motivation after a heavy sleep. The first we entered was almost a clothes boutique for crystals, a well-dressed if slightly ’80s-looking woman who inquired what we were looking for, which colors or styles or what we wanted to correct in our lives. “Just browsing,” I half-muttered, half-swallowed up, those instincts honed in me since teenagerhood of being in stores solely to have somewhere to be, never any interest in actually buying something. To my surprise, Elyse said, quick and guilelessly, “I’m looking for a love spell.”

“Sure, I can show you our love potions section,” said the woman, taking us down an aisle whose shelves were sparsely populated — or was it generously spread out? — with caterpillar-like crystals crawling their way across stone, gorgeously smooth stones the softly postuled shape of breasts, with a breastlike incline and curve, with intensely spiny knifelike undersides full of sharp crystal.

“Now, are we looking for a gift for a lover, or a spell to arouse the interests of someone who hasn’t yet fallen under your thrall?”

They narrowed it down to two: a darkly spiraling purple cone and a sort of cotton candy pinkish-white bowl-shaped structure. Both were distinctly more femme than anything I’d identify with Elyse, and it made me wonder about this trip, this mysterious endpoint of hers, who she might be and what sort of life might lie after these few weeks for Elyse, for Joey.

She settled on the purple cone. The woman boxed it up, and sinking into the pillowing tissue paper it looked like Darth Vader’s evil castle tucked inside a nest of peaceful clouds. As we walked by the other stores, we couldn’t avoid window-shopping, or second-guess window-shopping, which is what you do when you’ve already bought what you set out to buy but you can’t help thinking, was it the right choice, and what if, and would they take returns. I caught sight of the proprietor of one other establishment, a hippie woman in a long flowing skirt with her hair tied in a dangling thin cloth, skin the color of the desert sand, watching me as I watched her. I had on a baseball cap over my yarmulke and I couldn’t help thinking, does she know I’m Jewish? And then, is she?

I asked Elyse if she wanted to stop anywhere. She said no, and we kept walking.

We hung out in a park with gorgeously sinister graffiti tags and waited for the people who’d made them to pass by. The town had a newspaper filled with punk-band ads and snarky personal essays, but no cool kids, no outcasts, barely anyone on the street. We lay in the grass all afternoon while Joey went wild trying to scratch his belly with his nose. It didn’t work, and we didn’t find anyone. We didn’t know who we were looking for, but once they showed up, we’d be able to tell.

The town was heating up, and the sun was just starting to lick the horizon, when we thought of dinner, and of the road. Joey stretched in the grass. Elyse checked the time.

“Uh, Matt,” she said. “If we stop for dinner, we aren’t going to get there till eleven thirty.”

I checked my watch. Sure enough: the day had gone, and what felt like early evening in this temperate desert town would long ago have been nightfall anywhere else.

We grabbed fast food (her: actual McDonald’s, me: peanut butter and a loaf of bread from the mini mart where we got gas), ate in the outdoor seating, then hit the road. We were both from the East Coast before this, but had spent so long living in California that the existence of other states seemed like a tease. When we passed a sign saying we’d entered New Mexico it felt like an event. And when we realized it was still a good number of hours till Albuquerque, the next city on our agenda, we slowed down and started giving the icons on the highway exits more serious attention.

Soon, we realized that was not the optimal plan. I dug out a AAA manual and started flipping pages. The only motel we could find didn’t allow pets. “It’s only an icon on a page in an old book,” I suggested. “Maybe they do in real life.”

We got there and there was an even bigger sign on the door. But the place looked so picturesque, it seemed a cruel lie. It was one of those motels where the doors had pastel colors and different numbers. The office was in its own cabin, wooden with a triangle roof, built into the side of a cliff. We sat in the car and debated whether to go in and ask, not say anything and try to sneak Joey in, or keep driving. Driving was out of the question. It was late, we were tired, and there were no buildings at all on the horizon, let alone a motel with vacant rooms.

Inside it was homely. Red velvet curtains. Framed family photos. The woman at the desk looked like a Golden Girl, her hair plastic and symmetrical, sweetly wrinkled jowls of cheeks. Her voice was the sweetest thing, and I would swear she knitted her sweater herself. She gave us a look when Elyse said two beds — we were getting used to that — and when she walked away, I whispered to Elyse, “Let’s just ask.”

Elyse looked on the verge of agreeing with me. Right before the woman returned, she hissed to me, sidelong, without making eye contact, “Just don’t.”

“Here are your keys,” said the woman, slipping them across.

On the way out the door, I said to Elyse, “What’s wrong?”

“That,” she nodded across the counter at the wall.

There, in the center of dozens of family photos, was one with a more elaborate frame, gold, with gilt covering and a sort of genuflectable position. It was of President George W. Bush, and it was autographed. Bush, of course, had been on the radio all week, a vote on gay marriage was up, he was promising to reject it. His rejection, as we drove deeper and deeper into the country, and left the ocean farther and farther behind, was celebrated more and more, and its implications were darker and darker.

The woman at the counter, apparently resolved to our cohabitational weirdness, offered up a gentle wave as we left. I went into the car, slung a suitcase over my shoulder and held another at my side. Elyse quietly, quietly cuddled Joey against her, kept pace with me, and together, we slipped into the room.