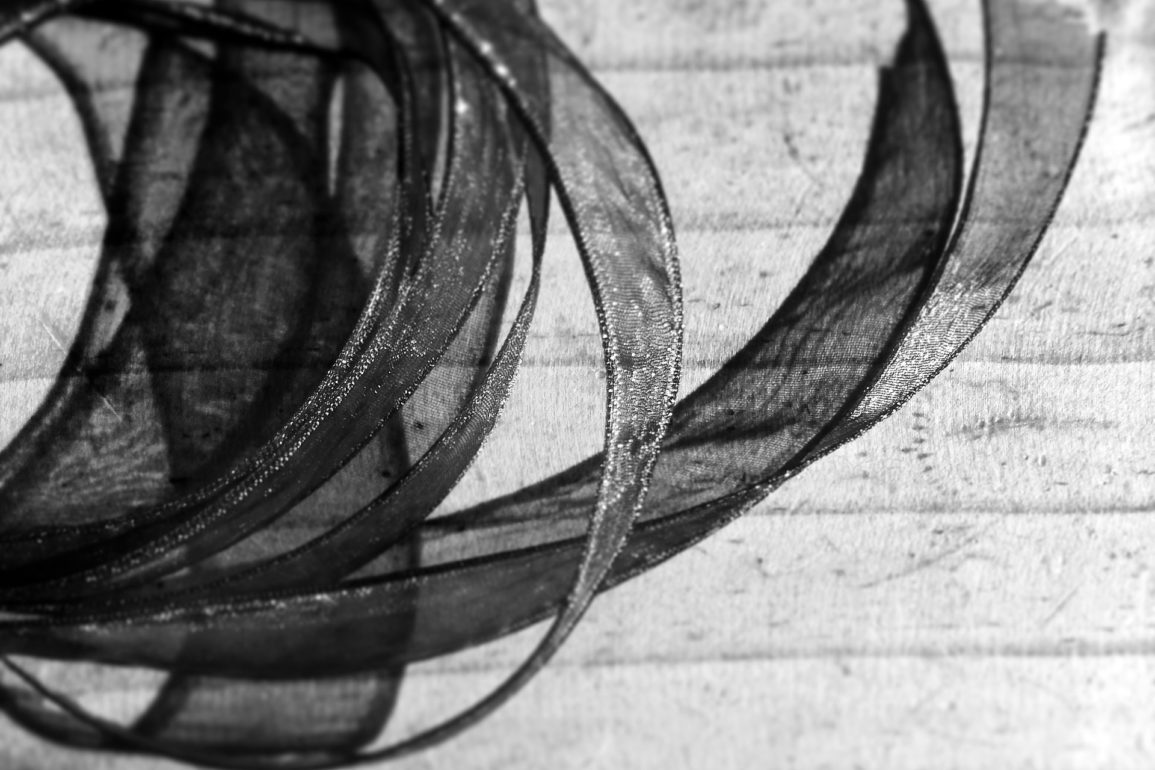 I was in my teens when the visits to Stanetsky’s Funeral Home became routine. It began with my four grandparents. I don’t remember the order in which they died and couldn’t tell you the difference between one funeral or the other. But I remember the doors of the family room in the funeral home closing for the ritual rending of Kriah; my mother, father, and their siblings on the inside, me and the lesser relatives and mourners left to find our seats in the chapel, to be there when those whose grief has been visibly torn open filed in.

I didn’t like being on the outside. I wasn’t in mourning for my grandparents as much as for the loss of one of the only representations of Jewish identity I had; four Eastern European immigrants died and took with them their Yiddish, their chanting at the Seder table, their recipes, their noise. I wanted to perform Kriah because I wanted to keep the silence I knew was coming at bay.

Growing up a Jew in an unobservant nuclear family in 1950s and 60s New England suburbia—where less than one percent of the population was Jewish—was like being given a body but no blood and guts. No Yiddish was spoken in my house, no Sabbath candles were lit. The walls of suburban homes in that era were coated with dreams of assimilation off which the scenes and scents of ethnicity slid. I received the obligatory religious instruction at my town’s Reform synagogue. I turned the pages of our English-filled prayer book right to left. And the only reason I attended synagogue at all was because it was required by my religious school, not my parents.

Of course, like non-synagogue-going Jews across the country, we joined the crowds on the High Holy Days—Rosh Hashanah, a celebration of the new year and the beginning of ten days of personal reflection; and Yom Kippur, the culmination of the previous days when, through atonement and repentance, we hope to be granted another year of life. Our temple’s sanctuary was too small to hold us all, so we gathered in our town’s armory, celebrating and confessing in the midst of military hardware.

I went through a brief Jewish identity flare in my teens, thanks to my temple youth group, a trip to Israel, my love of Israeli dance and music, and the fact that the synagogue was the only place where Jewish kids in my town felt they belonged. I began to take pride in my olive skin, felt less self-conscious about the size of my nose. But the flare subsided; the pilot light of my Jew-ness flickered.

After college, I got married and entered my husband’s large, urban, storytelling, Irish-Catholic family. I exchanged my Israeli dances for jigs and reels. I didn’t fast on Yom Kippur. I ate bread on Passover when leavening is prohibited. My Jewish identity remained on life support through my job at the 92nd Street Y and the money I helped raise for its programs for unaffiliated Jews. The irony escaped me.

I was thirty when my mother’s death brought our family back to Stanetsky’s. I had been raging and grieving for the prior two years, as it became evident that my mother would not survive her breast cancer. I sought no solace in Judaism. But now, after my mother’s death, I would have the means to act out what I could never find the words to express. Kriah. This time, when the door to the family room closed, I would be on the inside with my father, my mother’s three siblings, and my sister.

My sister and I were not alike in those days. She was fire. I oak.  On occasion I let her singe my limbs on purpose to get a taste of fire. Mostly, though, I had no choice but to feel her flames.  Seeing my sister fling herself out into the world, I tried to mimic her when it was my turn to go off to college. But I was not her. An acute episode of anxiety and depression halted my momentum, and then chronic melancholy and agoraphobia followed. The cord to my mother stretched, but I couldn’t cut it.

Kriah today, especially for less observant families like mine, is often performed with a symbolic black ribbon pinned to your clothing, which you tear instead of your garment. The rabbi first pinned the ribbon to the lapel of my father’s suit, then made his way around the room; me and my sister last. As he came closer to us, my sister stepped back and shook her head no. All day I had been waiting to make that tear, to be in the group that could give action to their grief. I wanted to feel that tear like a slap. But, next to my sister, I felt like a silly little girl placing so much importance on a ritual. I imagined her scoffing at the idea that this mass-manufactured ribbon could express anything close to grief. So I stepped back too.

It took me so many years to separate from my mother. Now, when I could acknowledge what I had achieved, this moment of ultimate separation, I allowed myself to doubt what I craved.

Eight years later, I lost a beloved aunt. Childless, a musician and an artist, she bordered on Bohemian. Not quite brave enough to skinny dip, she would enter the lake outside her home on Cape Cod in a housecoat, naked underneath, and let the fabric float up around her like a lily pad. I lived with her one summer while still in college when I taught flute at the Cape Cod Conservatory, a halfway house between home and independence. At the end of the day, we sat in the light of the setting sun, and she watched the glow reflected in my almost black waist-length hair and told me I was beautiful. But I was not deemed close enough to perform Kriah at her funeral.

In my fifties, it was my aunt Essie whose funeral returned us to Stanetsky’s. Essie was my second mother, even while my mother was alive. When I got my driver’s license, my idea of teenage rebellion was going to Essie’s house for a cup of tea, returning home jittery from the caffeine but feeling like a grown-up. Essie was the grandmother to my children; her daughter my almost sister since Essie, my mother’s sister, was married to my father’s brother.

Unlike all the previous deaths, I was there for this one, which followed a massive brain hemorrhage. I was enough of a daughter to write the obituary and find a vocalist to sing Essie’s favorite aria at the funeral. My Jewish identity had once again flared, in part because of the birth of my children in my thirties; in part because of my growing interest in storytelling, which requires diving deep into one’s soul and emotional inheritance; and in part because of my husband’s parallel quest and his resulting conversion. We were members of a congregation now. Prayer still felt like a scratchy coat, but I knew how to feel awe. I felt my religion and its rituals in my gut. But the only person allowed to perform Kriah was my cousin.

Now, at sixty-one, I am back in the circle of mourners. My father has died. Stanetsky’s must have redecorated since the last time I was here. The soft-colored upholstery of the couches and the rug look as if they have not yet absorbed the tears of many mourners. With me are my sister, my father’s brother, my father’s wife Donna, and her two adult children. I have gone coffin shopping with Donna, arranged for the officiant, helped compose the obituary. My father built and played guitars, so I found someone from the New England Conservatory to come and play Bach and Villa-Lobos. I gained permission from the cantor for Donna’s two children—neither Jewish nor within a Kriah-permissible category—to be part of the ritual.

The funeral director begins pinning ribbons. My sister accepts hers. I take mine and exhale. Finally. A small cut is made in each ribbon. We recite:

Blessed are You, Adonai Our God, Ruler of the Universe, the True Judge.

I tear my ribbon. I feel nothing. This feeble enactment has no relation to grief.

The numbness continues as we file into the chapel, as Psalm 23 is recited, and as eulogies are delivered—including the one that I wrote with tears but delivered with dry eyes. The cantor begins to chant the Kel Maleh Rachamim, The Prayer of Mercy.

God, full of mercy, who dwells in the heights, provide a sure rest upon the Divine Presence’s wings, within the range of the holy, pure and glorious, whose shining resembles the sky’s…

It is the music I need—in a minor key, with notes that weep and stretch like taffy, the catch in the cantor’s throat that mimics my own. I sway, I cry. The grief I am feeling at this moment is not for me, but for my father. While I don’t believe in an afterlife, I attach myself to the idea of my father being lifted up. He had died demented, a long slow slide from the genius that he was. He also died in grief, a sorrow he had suffered since the day of the Alzheimer’s disease diagnosis. He mourned for the parts of himself he would lose or no longer recognize; he mourned for what he would miss in the lives of his loved ones, a future without his cognition and, eventually, without his body.

I was with my father until three hours before his last breath. His wife, no longer able to watch her husband disappear, asked to go home.

I wish I had stayed. My father cannot perform Kriah for himself. With Kel Maleh Rachamim as my torn garment, I do it for him now.