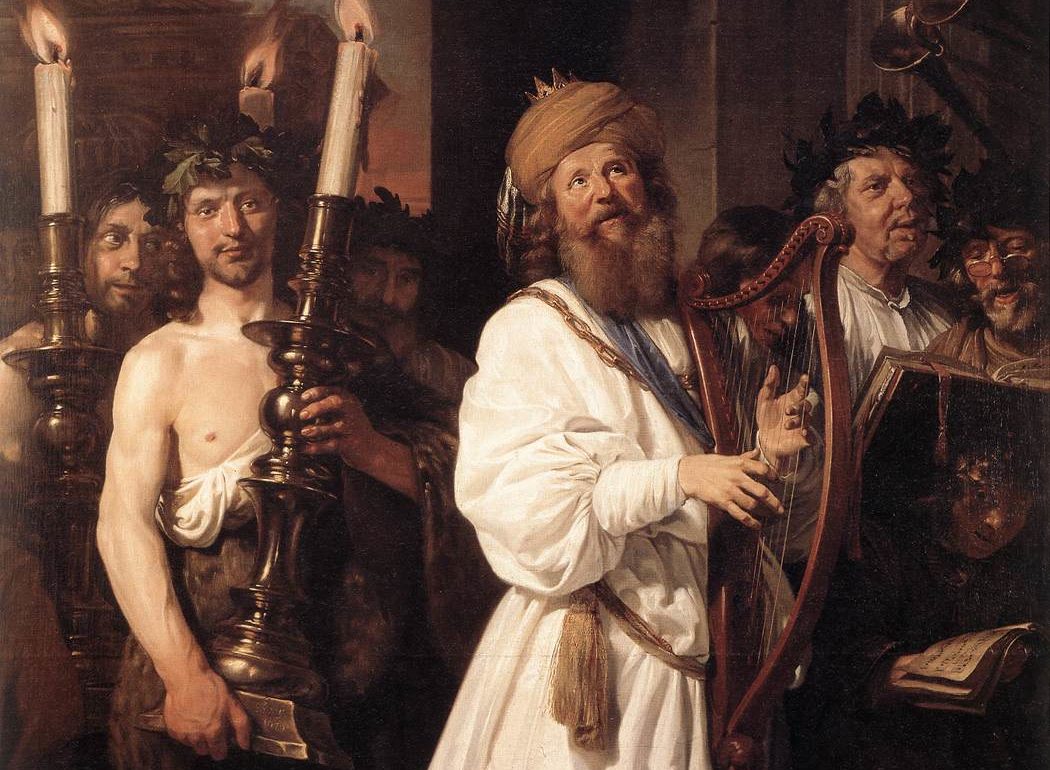 The Levi Who Couldn’t Sing

The High Priest, adorned head to toe in holy garments, rushed through the courtyard of the Great Temple past the throngs of crowds to reach the steps. He ascended and turned to face all those assembled. At his signal, the first bullock was taken and in one swift action, its throat and windpipe sliced. All of the priests resumed their rituals and the festival of the new moon of Tammuz was in full swing.

A great song was belted from the balcony by the expert choral Levis. They played horns and a rhythm section laid down the beat like a chugging bottle of wine. Ecstasy permeated the tightly crowded multitudes dancing with abandon. It was the kind of organized chaos that one only experiences at a summer carnival when concerns of personal space are ignored in favor of losing one’s self in the moment.

Sweat beading on his brow, the High Priest felt a single drop cascade down and gather on his eyebrow, threatening to drip over his eye at any second. That distraction paled as the High Priest’s ears perked up to catch one choral voice gratingly out of harmony with his brethren. Like an ear worm, once he heard it it was all he could focus on, despite the beauty of the general song.

“What is that awful sound?” He thought, his hands busy in sacrificial blood.

The Priest peered up out of the corner of his brow without moving his head for fear of the sweaty nuisance, though he knew its cascading was inevitable. His eyes darted across the chorus and stopped at Judah Ben Plimo.

His first instinct was to curse G-d’s holy name, but he hesitated. The song continued and Judah Ben Plimo hit a particularly sour note. The Priest winced.

The slight wiggle caused the bead of sweat to jump into his eye. There was no chance of wiping it without a fair amount of Ox blood becoming a larger ocular issue.

The High Priest let the out the curse under his breath, confident no one else would hear it among the racket.

The fellow priests stopped what they were doing and turned in astonishment toward their leader.

The chorus stopped, except Judah Ben Plimo, his flat song stopping only a beat later.

With the music absent, the assembled suddenly stopped their ecstatic dance.

It was quiet enough to hear a pin drop. A donkey hee-hawed in the distance of the city.

A lesser man would mistake it for Judah’s song.

A whisper of rumor spread among the crowd.

Judah Ben Plimo was the Levi who couldn’t sing. Everyone knew it, but no one said anything because of the brotherhood’s code of silence on the topic.

When he was thirteen, his voice cracked like a Ming vase and no one knew what to do. So they tried him on various instruments, but Judah Ben Plimo had no rhythm and no breath. His fingers were thick latex balloons rubbing against one another on the accompanying instruments. A Levi with no musical talent had never even occurred to anyone before. His father suggested they stick him in the chorus with the hope of drowning out one voice among the broader number, like a bit of pork in a cauldron of kosher soup.

But in that moment on the first day of Tammuz, Judah Ben Plimo had brought the entire collected congregation of Israelites to sin.

He broke tradition and belted out an original composition. The words were angelic though the voice was strained.

The drummers were the first to join in, trying to match his tumbling tempo. Within a moment, dancing resumed, and the people themselves began to sing the cyclical song.

No one had ever been audacious enough to join in a Levite song before. Now song echoed through the walls of the entire Israel.

Judah Ben Plimo opened the gates of heaven, sure as he had closed them before.

The High Priest grabbed an additional sin offering and resumed the celebration.