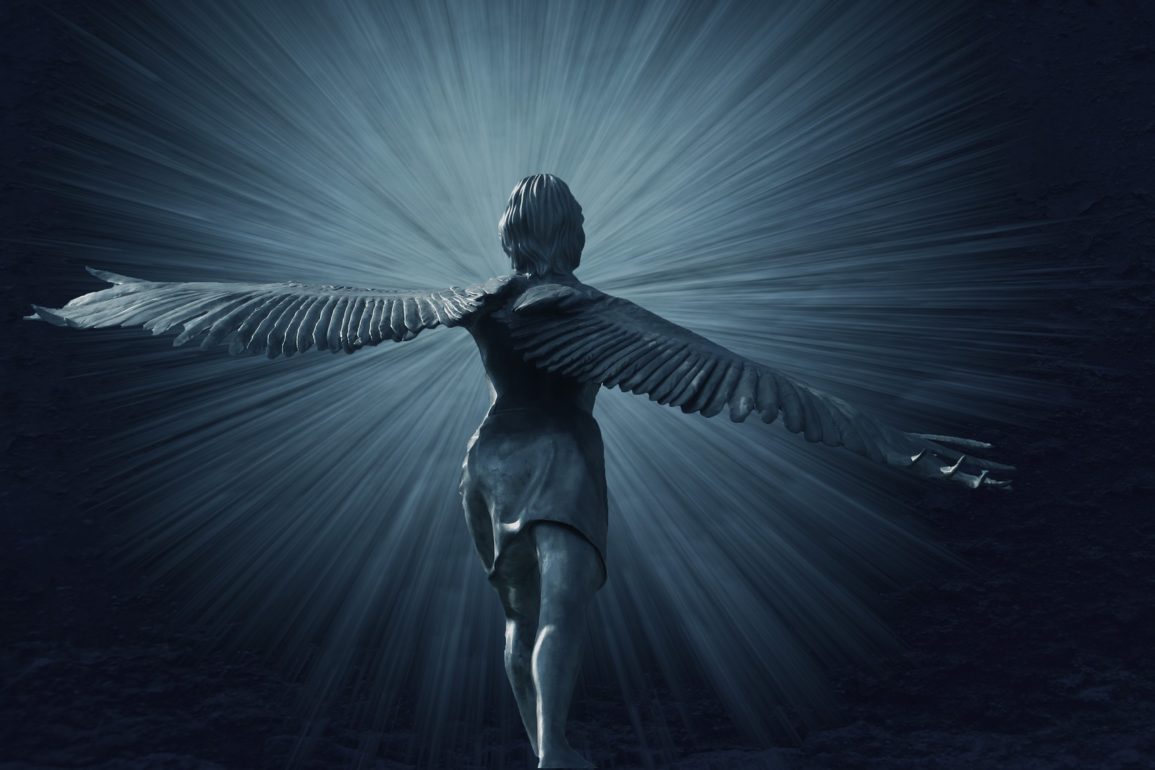 The mid-afternoon sun streams in through the windows of the empty coffee shop and a small door chime announces the arrival of a customer.  Standing alone at the pine-colored counter, next to a variety of thermoses and a large espresso machine, a heavyset, slightly balding barista looks up from his iPhone and notices a woman entering the café.  Wearing small black heels, she is no more than five feet tall.

“What’ll it be, friend?” the barista asks the customer, greeting her with a warm smile.  He waits patiently and as she scans the menu on the chalkboard, he admires her modest, knee-length, one-piece black dress, which covers her shoulders and arms.  Her dress is as dark as the desert sky at night, and dotted with small diamonds as numerous as the stars themselves. Her long red hair falls just below her shoulders and the strap of her ebony leather handbag bisects her dress diagonally.  He feels a sense of the customer’s energy, and what he can only describe as an otherworldly strength. While he recognizes her attractiveness, he thinks to himself, she’s not my type.

“Just a small coffee.  Make it the midnight roast.”

“Black.  I don’t do sweetener,” the customer says firmly. “Your name?”

The customer looks around the empty café and then focuses her attention on the name badge affixed to the left breast of the barista’s smudged green apron.  “Why must you know my name Kevin? I’m the only one here.”

The woman forces a small smirk, casting a condescending glare at the barista.  Unnerved by her body language, Kevin senses that he should not push his question any further.

Reaching for a corrugated paper cup, Kevin looks down shamefully.  Last year, freshly downsized from a corporate role which paid six figures, Kevin remembers how he trained for this job by taking guidance from Joey, a lanky, pimply seventeen-year-old who seemed to delight in demonstrating to Kevin, three decades his senior, how to pour a cup of coffee.

As if the humiliation of being mentored by a high school student wasn’t enough, Kevin found himself worrying whether this woman was a dreaded “Secret Shopper,” a random customer paid to offer feedback on an associate’s skills and professionalism to management.  Kevin cringed, recalling how Joey would always boast about the eleven multi-colored stickers on his name badge, recognition of accomplishments that separated his talents from those of his colleagues. Looking down at his unadorned nametag, Kevin wonders how he had fallen so quickly to the very bottom of the employment ladder.

Turning to a thermos to prepare the woman’s coffee, Kevin acknowledges that it is only a half-hour until three o’clock.  Soon enough, he will close up shop for the day and go home.

“Three dollars, please.”  Kevin hands over the steaming cup of coffee nervously and as he places the cup on the counter, his large, sweaty hand tilts slightly, causing some of the coffee to spill.  Grabbing a nearby towel, he adds, “Sorry, ma’am, just an accident. Let me wipe that up.”

The woman hands over three crisp dollar bills and takes the cup of coffee.  Eyeing Kevin disapprovingly she says, “You really should be more careful.”

Kevin rolls his eyes in frustration.  He is accustomed to being put down by his patrons and once was even held at knifepoint for the measly $32.26 in the cash register.  Realizing his place, he scrambles to regain his professionalism.

“So, are you meeting someone this afternoon?” Kevin wonders with an awkward lilt in his otherwise gruff voice.

Last year management instructed him to simply perform the transaction.  They’re just here to buy coffee and a snack.  Don’t go getting involved with the customers. But Kevin can’t help himself.  He wants to demonstrate appropriate and effective customer service just like Joey, but words don’t come easily to him.

“Yes,” the woman offers, her seeming harshness melting away ever so slightly.  “I’m meeting someone I haven’t seen for years. I just need a place where we can sit and speak face-to-face.”

“You’re in luck today,” Kevin offers, disappointed by the lack of business.  “Usually we’re quite full and our customers have to wrestle for a table.”

The woman’s dismissive expression suggests that his word choice is inappropriate.  Maintaining her composure, she responds, “That table for two, by the window, will do.”

“Enjoy your afternoon and your coffee,” Kevin replies as he turns away from the counter and moves toward the sink to begin washing some dishes.  Relieved that his interaction with this customer has concluded, he nonetheless begins to wonder. Who will walk in the door to meet with, or rather reunite with this person?  What is the purpose of their engagement? And what pray tell is her name?

Washing a fork in warm sudsy water, Kevin chuckles quietly.  Everyone thinks that being a barista is all about filling coffee and making people happy.  But for him, the only bright spot in what he deems to be rather menial labor is people watching, overhearing snippets of stories, and wondering about the larger drama at play.

Finishing his duty at the sink, Kevin watches as the customer sits at the table, sips on her steaming coffee, cradling the cup in her hands.  What she ponders is unknown to him, for he cannot read into the depth of her silence. There is a sense of pensiveness now, as if the customer is lost in a quiet moment of reflection.  He wipes a coffee mug clean, all while continuing to glance in the mysterious stranger’s direction, every now and again, just enough, not too much, certainly not letting on that he is interested in knowing more.

After a few moments, Kevin watches as the customer pulls out a small black flip-top phone, a relic of yesteryear.  Her expression changes into one of shock and frustration. Her face reddens, ears become enflamed and Kevin notices rage in the stranger’s eyes.

“Grrr, it’s just like him to pull a trick like this!  That conniving little… why didn’t I see this coming? First the birthright, then the blessing, and now…” the customer blurts out exasperatedly in the empty café.

Kevin watches the customer’s confusing outburst, surmising correctly that her old friend won’t be coming after all.  He expects that she will quickly get up and leave but is surprised that she doesn’t.

Rather suddenly, the customer’s mood changes, the anger dissipates, and her shoulders relax.  Kevin is surprised to see her burst out laughing. He has seen many strange encounters in this coffee shop and overheard many disturbing conversations, but this particular customer has piqued his curiosity.

Don’t go getting involved with the customers, the voice in his head tells him.  Kevin should know better. But he doesn’t.  He steps away from the counter and walks over to where the woman is seated, noting how she has positioned herself exactly where the words “Jabbok’s Coffee” have been embossed on the other side of the glass.

“You okay?” he asks upon approach.

The customer shakes her head and smiles widely.  “I’m fine. It’s a beautiful, practical joke. After all these years, he stood me up!  Nothing more than that. Here. See for yourself,” the stranger says, with a teasing glint in their eyes.

Kevin is bemused that she hands him the flip-top cell phone.  So much for not getting involved.  Something like this has never happened.  He reads the message on the screen:

Thanks for the blessing you bestowed so long ago.  My hip still hurts, but I’m glad it does. I’m a better person because of our encounter that night.  Sorry for missing out on our coffee date, but you didn’t really think I’d give you the chance to wrench my left hip too, did you?  <heart> Jacob

The barista closes the phone and hands it back to the customer.  “Who is Jacob?” he inquires innocently.

The customer rises from the table and stares pointedly at Kevin, her slate gray eyes stopping him stone cold dead in his tracks, like a gaze from Medusa herself.  Fully entrapped, Kevin takes a hesitant step backward, sensing that he has crossed a boundary he shouldn’t have.

“Didn’t management tell you not to get involved in your customers’ business?”

“This message isn’t about you, Kevin,” the woman says, glancing at the telephone in her hand.  “Besides, I’m not here to wrestle with Jacob. That time has come and gone. You however, are another matter entirely.”

Intimidated, Kevin’s breath escapes him.  “I…I…I’m s…s…sorry,” he struggles.  “Pl…pl…please tell the head office that I’ll try to do better.  I…I…I need this job!” he whimpers, falling to his knees.

The woman senses his fear.  “You’re probably wondering how I hurt Jacob’s right hip, aren’t you?  And you’re terrified that I might wrench yours, or pull something else.  You don’t want to cross me. I’m far more powerful than I appear.”

She stares deeply at Kevin, and then walks past him, heading toward the door.  And for the first time, as she passes by, he notices the large, pink wings on her back.  Positioned between her wings is a gleaming, silver sword, with a golden hilt, studded with rubies.  He shakes his head incredulously.

“Each of us has a weakness,” she says, turning to face him.  “Something we don’t like about ourselves, something in our past, something we want to change, something that needs to be exposed for us to grow.  I am sent to help people confront their deepest truths. Sadly, many just keep on running away. But the strongest ones turn their struggles into the most profound blessings.  Jacob isn’t meant to meet me again, because he finally learned his truth. He doesn’t need my help to grow any further. He needs himself.  He needs God.  And he would do well to keep on wrestling with beings both human and divine.”

She opens the door to the café, looking back toward the stunned barista.

“Y…y…you’re not with management, are you?” Kevin blurts out.

She shakes her head negatively.  “No, Kevin. I work for someone far more senior.  She’s tried to get through to you with irate customers, and even spared you at knifepoint.  And instead of dabbling in other people’s stories, she’s wondering when you’re going to take a good, long, hard look at yourself.  She wants you to stay focused on your own business. Got it?”

A wordless expression of fear and consternation passes across Kevin’s face as he reflects on the wretchedness, monotony and minimum wage that have come to define his life.  The woman holds his gaze for a moment, until she is sure that he understands her message. She then walks through the door, her wings fluttering behind her. Kneeling alone on the harsh wooden floor of his own Jabbok, Kevin recognizes that her words are the last warning he will ever need.