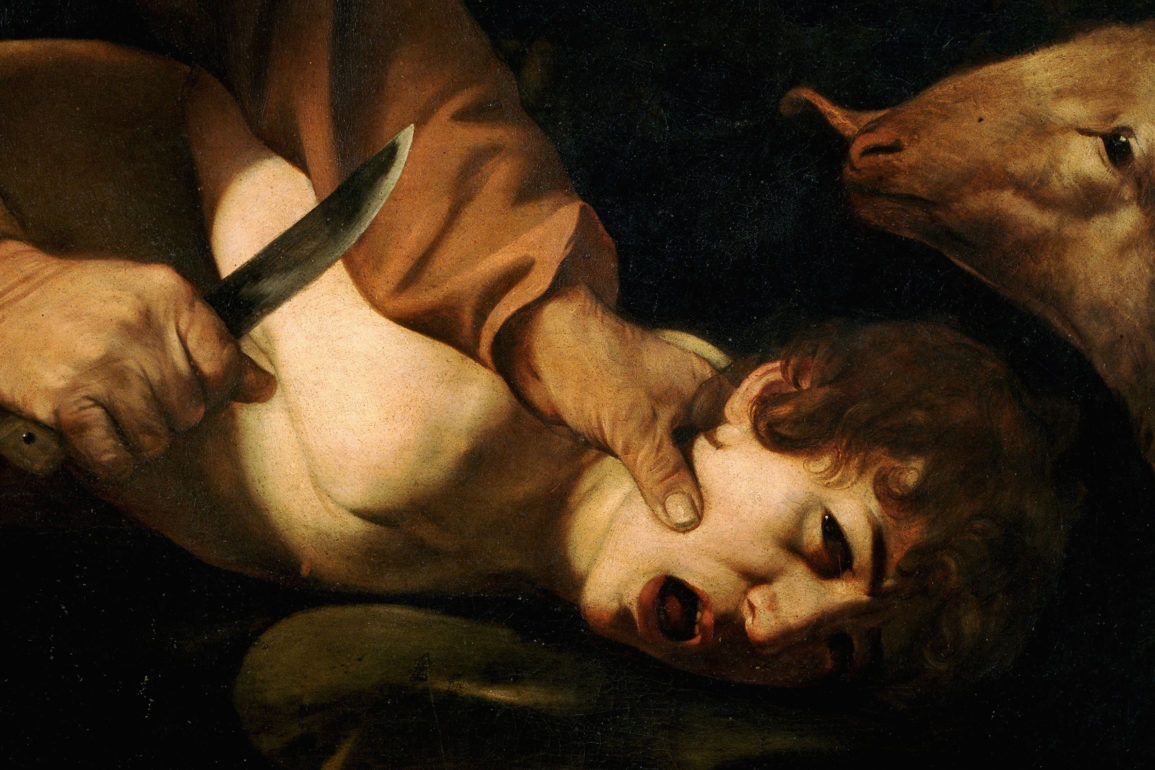 Abraham, Father Of None

Abraham stood on that very spot, knife in hand.

Before him sat his son Isaac, a man and yet a child, bound like a lamb.

Against a stone, the weapon was sharpened and inspected closely. Abe raised it aloft, and this time nothing happened.

No cry from the heavens.

No angel of G0d came, no replacement animal happened by the scene.

Abraham slashed down at the neck of his blessed son, spilling his blood on the holy mountain.

In a swift moment, the action was done.

As Isaac choked out, the sound was masked by Abraham’s bitter scream echoing to the wilderness.

Then, there were no more words. Only the scratches of the deepest part of the throat as he tried to make a sound.

Tears mixed with blood and countless grains of sand.

Abraham composed himself, empty and sad. He made his way down the mountain.

There, his servant Eliezer waited.

To ask of the boy’s fate would be too cruel. He knew the answer from his master’s face.

They walked in silence.

Abraham returned to his camp to find the limp body of his dear wife Sarah.

Sarah had stopped laughing when the vision struck her. She needed no prophecy this time to know the future.

The sacrifice of their only child, G0d’s little miracle, was no mistake.

Once again, the grief was too much.

In a matter of days, Abraham had now lost the two people closest to him.

To bury his wife, he would seek out a plot.

But this time, there would be no Machpela cave. There was no future to secure.

Abraham saddled his donkey once more, and set out back to the holy mountain and set Sarah down beside her son.

He set out twelve stones to mark the spot, and they remained separate as he rested there for the night.

At dawn he returned.

Where to go now?

He had been traveling for his entire life.

It was all he knew.

Go here, escape there. Always with guidance. But the direction had ended.

Should he seek out Hagar and Ishmael, his forsaken family? They had been cast into the desert in such a hurried fashion.

I have probably killed them in the process as well, he thought to himself. No one can survive this heat without proper provisions.

What about Lot, the contentious nephew? Saving him and his daughters from certain doom in Sodom must be worth something in their eyes. Surely they will not have forgotten.

But their cave was full of prosperity. Each incestuous child born to Lot’s daughters was a daily reminder of the way Abraham had consumed his own line. The pain became too much to bear.

Once again, he had to leave.

On the road back to Ur Kasdim, Abraham sat with Eliezer by an oasis.

No kindnesses came to them or their flocks. They bore the weight of water on tired backs.

A year had passed since Sarah’s death, and her tent remained empty and dark.

Abraham asked one final kindness of his trusty servant. Take what remained of his wealth and go set up a life for himself. Eliezer had a daughter to support, and a growing family.

Despite his hesitance, Eliezer nonetheless relented.

Alone, Abraham ventured forth back to the place of his father, his land, where he was born.

He had seen the place which G0d had shown him, and now he was back. What did he have to show for it?

In his final hours, Abraham sat in the limitless dust and looked at the night sky. Clouds rolled in, covering the last vestiges of visible stars.

The light had left and the void was all that remained.

Abraham laid down and rolled over.

And then a voice came.

But it was his own.

And again it cried.

Featured Image: Detail from “Sacrifice of Isaac” by Michelangelo Caravaggio, circa 1603.

Special Thanks to Jason “Sruky” Cohen for imagining the scenario this story is based on.