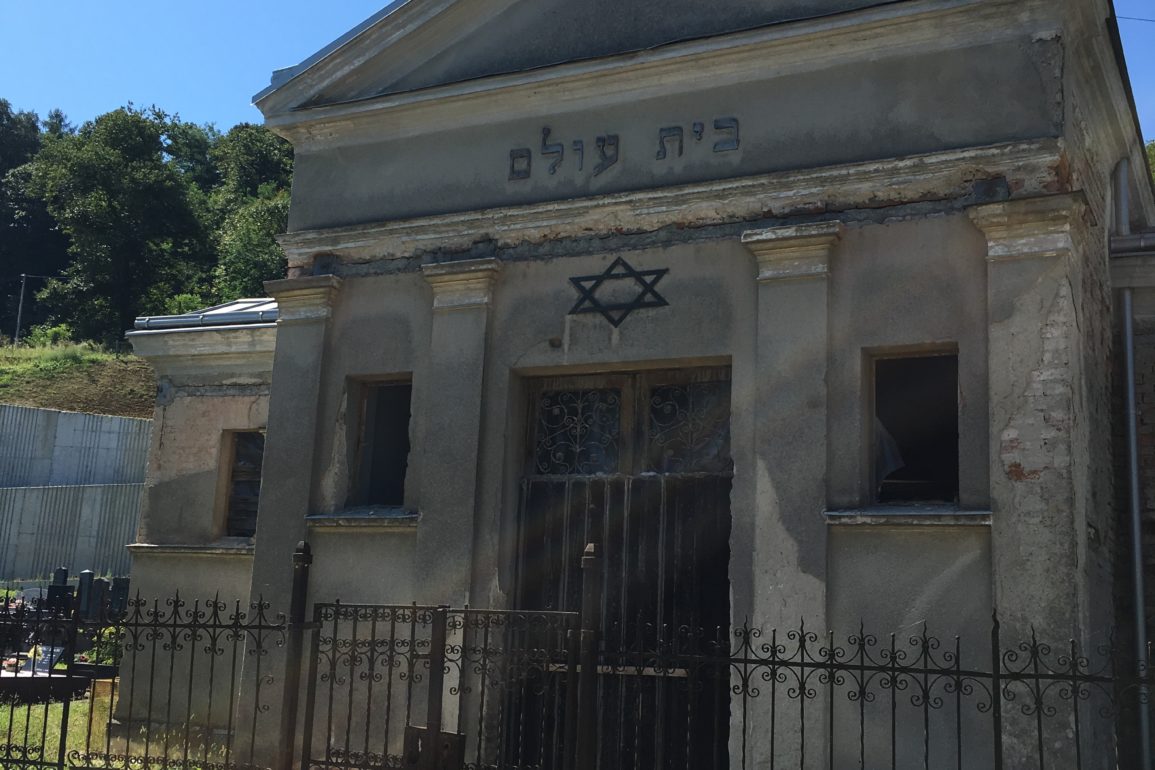 Three Cemeteries and a Funeral

On a blistering morning during our recent trip to Croatia, my husband and I drove west from Zagreb towards the first of three cemeteries we would visit that day. We had come from the States in late August to see his father and planned to retrace some family history with him while he still had the strength to join us.

For more than 50 years, my father-in-law had a distinguished career as a preeminent conservator of cultural monuments in Yugoslavia, and after its breakup, Croatia. He liked to drive around in his workhorse Volvo to important national heritage sites, many of which were his projects. Eager to learn and travel, we were happy to come along for the ride.

One summer, our family spent more than a week on the road with him, hopping from town to town on the Istrian Peninsula. He’d retired by then and my mother-in-law had already passed away. But when we stopped in Hum, the smallest town in the world (population 17), I remember thinking he was still the tall, outsize presence he was on the night I first met him. His son and I had been out on our second date when the Volvo broke down. He came to our rescue (and the Volvo’s).

His decline was slow yet steady. His blood pressure spiked, his kidneys failed, and his legs grew weak.  If he felt up to it, he attended his beloved concerts, though he mostly listened to his vast library of classical music on his tablet while continuing to indulge his taste for sweets. There were many close calls, moments when we thought he’d come to the end of his road. But he rallied so many times we nicknamed him the phoenix.

On all those occasions we traveled with him, it was really something to watch my father-in-law approach a monument or enter a city’s cobblestoned central square. He had such respect for history and art and for masters of their craft, as well as those who simply walked the earth before him. Nowhere was this more poignant than at the cemetery.

Though we hoped he would come along that Sunday of our three-cemetery outing, he had a heart attack the day before we arrived in Zagreb. He was weak, yet stable, and hospital visiting hours were only in the late afternoon. My husband, sister-in-law, and I set out for Karlovac in the morning, disappointed to be going without him.

Our rental car – the Volvo was already long gone – hugged the narrow road as we snaked towards the cemetery, the only surviving remnant of the town’s Jewish heritage. Had he been with us, my father-in-law, whom we all called Deda, or grandpa, would have offered an interesting historical anecdote or some tender detail about the family members buried there.

Today, only a handful of Jews live in Karlovac. The fresh graves in the cemetery belong mostly to Catholic families. The Jewish matzeivot in the section we visited stand on the slope of the hill at the back, hunched forward like a minyan of elderly men caught up in prayer. It was my first time there, and I held my breath when we reached my husband’s great-grandparents’ tomb. The nearly faded inscription also memorializes three of the 74 family members murdered at Jasenovac, Croatia’s Holocaust-era death camp.

With the bottle of mineral water we had in the car, we performed the ritual washing of our hands, cleansing ourselves of the touch of death we encountered on that first leg of our journey. We then headed further west towards Vrbovsko, a town in the mountainous Gorski Kotar region where my mother-in-law grew up.

It was there that Antun and Katarina Šragalj hid her during the war, saving her from deportation to the camps by passing her off as the twin of their daughter Štefica. Zdenka, the youngest sister, accompanied us to the Catholic cemetery, where Štefica’s grave was only a few months old, the sense of loss still an open wound. After, we sat for hours sipping Turkish coffee with Zdenka and her husband, feeling the volume of Deda’s absence from the table while they filled us up with stories about life during those difficult years and the friendship that has bonded the two families ever since.

Vrbovsko is a place of breathtaking peace, and it was hard to leave the Šragaljs behind. But we needed to return to Zagreb, to see Deda before making our last cemetery stop of the day. He was sitting up when we arrived, a hopeful sign that he was healing. He was especially happy to greet his grandsons and drink the coffee our youngest bought him from the vending machine in the hospital lobby – a shot of espresso with chocolate, cream, and sugar. We promised we’d bring him another cup when we returned the next afternoon.

In Mirogoj, Zagreb’s beautiful, sprawling cemetery, we spent time with my husband’s grandparents and his aunt. For each, we bent down to pry rocks from the earth as a small remembrance of our visit, placing them atop the headstones as if to say, “We are here. We haven’t forgotten our love for you.” The time passed there as it always does for me, with a sense of longing to have known them. But something was different, amiss, when we reached my mother-in-law’s grave.

My father-in-law mourned her every day since she died nearly two decades ago, visiting her often on his own and accompanying us to Mirogoj whenever we were in town. As was his custom, he’d buy flowers from the woman selling at the stand near the gate and rest a fragrant nosegay on her grave. Or he’d light a candle in total silence, his eyes reflecting the pain of ongoing heartbreak he felt without her beside him. That he was not by our side that afternoon was a foreshadowing, a mournful shift in the order of the universe.

We turned to go, making a quick stop at the old water pump to wash the touch of death from our hands for the third time that day. And though none of us said a word as we exited through the cemetery gates, the question hovered in the air. How soon would we need to return?

With each setting of the sun, my father-in-law grew smaller, shrinking into himself as if he were packing up for his departure. We saw him right before we left the country, embracing the weakening body that could not lift itself from the hospital bed. It was hard for us to go, though we were hopeful that a procedure scheduled for the next morning would restore his strength. My husband reminded him that he had already booked a flight to see him in October.

One week later, years too soon, Deda was gone. My husband boarded the plane with a dark fog draped over his shoulders, the waves of loss enveloping him. This trip, there would be no excursions to important cultural monuments or historical sites. Only a visit to the cemetery to rest his father beneath a stone of his own.

Image of Karlovac Jewish Cemetery by the author