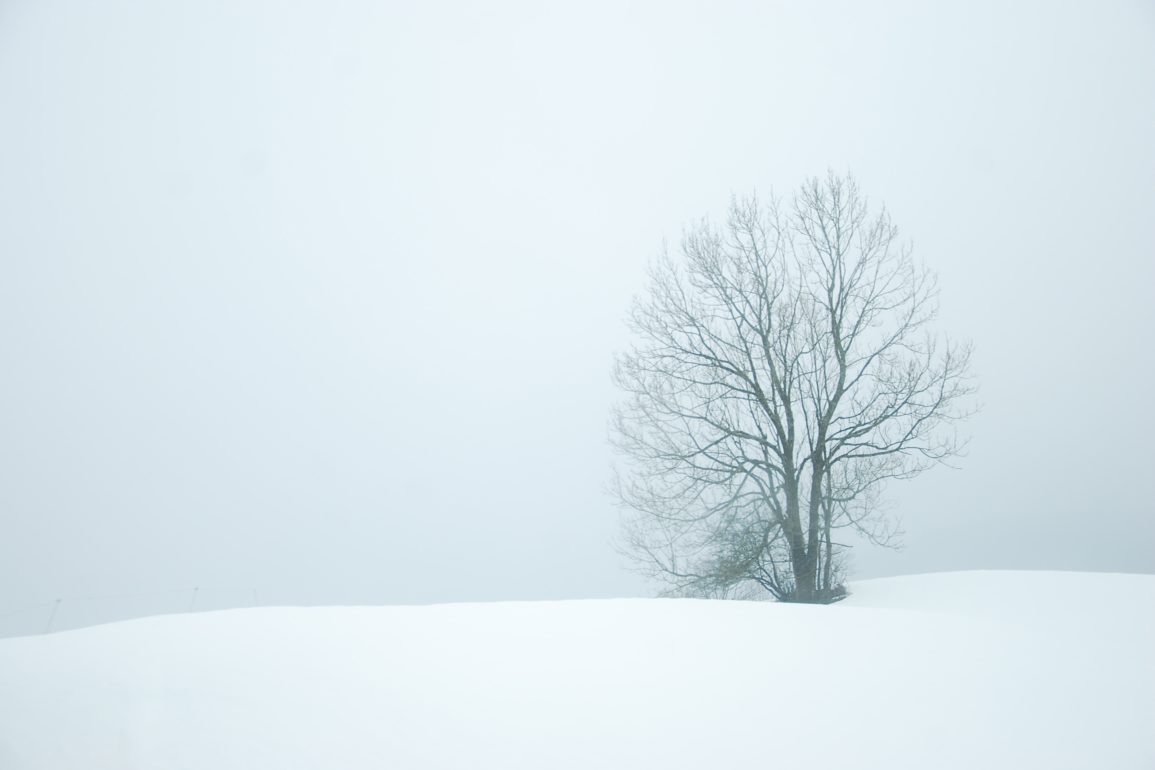 The night before, I am a child again.

It was the winter of fourth or fifth grade, and the snow was so deep I had to push my whole body through it, leading with my shoulders the way you’d tread into the ocean. How I was allowed outside alone in that kind of weather, even bundled up in snow pants, I cannot fathom. But the snow wasn’t coming down anymore and the aftermath of the blizzard would keep us home from school for days. Perhaps my mother just needed to get me out of the house.

I, too, was glad for the quiet, certain I had G-d all to myself out there. The memory remains with me, and now, on the eve of another winter storm, I wish I could hold it in the palm of my hand.

At some point I fell, landing face down. My eyes burned and I lost one of my boots in the deep snow – fear building in my chest as I tried to find it, the tears coming when I finally did. A sudden wind gust sent what seemed like thousands of snow whorls adrift, at which point I abandoned the beautiful silence and headed home, dredging my feet one after the other from out of the thick, white depths. I was convinced I’d left G-d out there by Himself.

Back in the present again, I’m in the garage, lining up the shovels and the ice chipper. We’re low on salt, so I run out to get more. I pick up a few other snow day staples while I’m at the market – milk, coffee, cocoa. But what should’ve been a quick errand takes forever, the checkout line snaking into the baking aisle. The store is teeming with humans, all of us participating in this communal rite of passage, as if we need to be together before the inevitable isolation of the inclement evening ahead.

To pass the time, I subtly check out what others have in their shopping carts and imagine the truth of their lives. The lady behind me is buying towers of cat food. The man behind her is getting cases of water, as if we’re heading into Armageddon, not 6-8 inches of snow. Before long, I strike up a conversation with the cat owner, who, as it turns out, has no idea there’s a storm coming, though we agree it might end up being nothing.

Yet exactly as the meteorologists predicted, a cold, hard rain has already begun to fall by the time I return to the parking lot. It pierces my face as I load the bags into the car. I nearly run back inside to notify my former line mates that the snow is coming, that it’s true. But I stop myself, certain they do not share my enthusiasm.

At home, anticipation takes flight in my chest. With the practical preparations out of the way, I catch the rain turning white and shout with delight to no one in particular, “It’s happening!” I am giddy with the prospect of letting the high school boy, who loves his sleep, stay in bed well past dawn. Not wanting to waste chits with G-d on something so minor, I pray only the smallest bit of a prayer that the gym will close as well. Though I love to exercise, I could use the rare luxury of a full day in pajamas. Besides, at some point I’ll have to shovel, a workout as good as any.

I open the front door every half hour or so to guess the number of accumulating inches. I check for school closings on my phone. I am breathless, like a five-year-old leaving for Disney in the morning.

And when morning comes, the snow day confirmed, I wake early, even though I don’t need to. I long ago fell out of the habit of a full night’s sleep, but I don’t mind. It gives me the chance to stare out the window at the stillness, to remember that afternoon so many years ago when I felt G-d’s presence in the snowy whorls cast aloft by the gusting wind, my body heart-deep in the aftermath of a blizzard.

While my youngest, the only one at home, sleeps late into the morning, my eyes are transfixed by the glare of the downy white blanket that has covered everything in the night. I’m greedy, wanting it all for myself – the snow and the quiet and the chill in the air and the feeling that we’ve started all over again, pure and free from worry. I rub my eyes and shake myself out of my reverie, letting the flakes descend in the snow globe of my memory.

If you stop by, stomping the snow off your boots at the door, I’ll welcome you in. I won’t give up the stillness, but I promise to make you a cup of cocoa while you stare off into the distance – hopeful and full of awe – in search of your own.