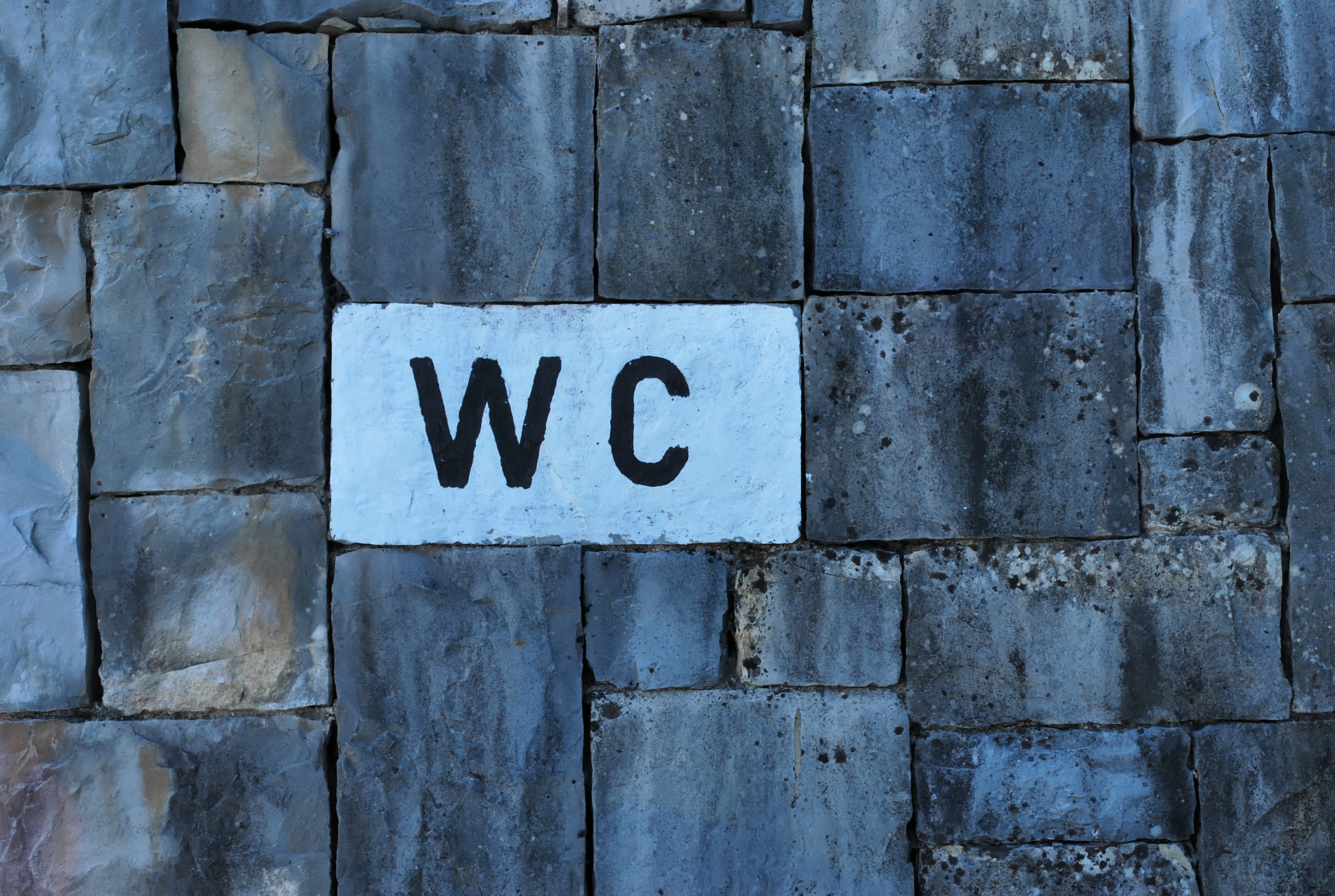 God of the Bathroom

Blessed are You, Lord our God, King of the universe,

Your Torah tells us Upon the doorposts of your house, but it doesn’t mean all of them, which I know because there’s no mezuzah on the bathroom door.

All the other rooms get one – bedrooms, dining room, kitchen, playroom and home office, even the finished basement with the washer-dryer alcove at the back. It’s what we do, this Jewish business of affixing holy words to our spaces, hanging a mezuzah to signify that sanctity resides among us.

So tell me this. How is it possible that You, God who is everywhere, isn’t in the bathroom, too? And if You are, why does it get short shrift?

When I’m a young girl, I pose the question to the rebbetizin who teaches our Hebrew school class. She says it’s because of the private, unsacred nature of what we do in there. Still, I’m ornery because this strikes me as an injustice, though I finally accept that some rooms are more equal than others, like siblings in a pecking order that leaves one child wanting.

Your master plan for our bodies is a stroke of creative genius, a fact I appreciate only when I’m older. It’s astounding, mind-blowing:  a corporeal network of openings and cavities, holes of different sizes positioned at the exits to usher toxins and waste from our systems. They help preserve our physical dignity, even though the sights, sounds, and aromas of the scatological, such fodder for adolescent humor, disqualify the bathroom for a mezuzah.

The ability to void and excrete on our own terms is one of Your most generous gifts to us, a wonder smaller in size than Your oceans and canyons and sunsets, but vaster in wisdom, more teeming with miracles. Anyone who doubts it should ask a person who is perennially constipated or unable to hold his bowels. Or if they want a visual, they can check out what happens when a house gets a clog in its sewer line. One rupture, one blockage – the whole system shuts down, with messy and often painful results.

I think of You, and of this, as I stand hypnotized before one of those Rube Goldberg-inspired sculptures at a children’s museum, watching the little balls travel through the complicated mechanical configuration of tubes and spinning parts. Though I don’t point it out to my then young children – yet another regret from my annals of parenting – I envision our urinary and defecatory systems, operating at peak performance. The components tick like a clock, their movements unrestricted.

By then, I’d moved past my righteousness about the mezuzah missing from the bathroom door. The bathroom bracha, however, known as the Asher Yatzar, was another story. I first learned the words from the rabbi I studied with in middle school. I’d grown up in a traditional home – we went to shul on Shabbos and kept kosher – but had begun to immerse myself in the intricacies of Orthodox observance. And while I didn’t commit to being fully Shomer Shabbos until several years later, if I had to pin that decision on a handful of influences, the blessing recited after using the bathroom would be among them.

To discover that the Talmudic sages spent time discussing matters of the toilet was life-changing for me. It acknowledged that even the complicated inner-workings of our GI tract are a part of our ongoing spiritual dialogue with You. I was also taken by the way the Asher Yatzar elevates our most basic bodily functions to a holy level. And it gave me something substantial, something earthly and grounded, to grab onto when I was a teenager, struggling to make sense of – and find my place in – the world.

I need to pause here for a moment to do a little teshuva before I carry on.

Though I continued to feel the words in my heart, I did not keep this beautiful blessing on my lips with regularity. There was a honeymoon period when I took great care with it, enunciating the words, never missing an opportunity. But otherwise, I mumbled and swallowed the syllables without giving them much thought, or I forgot about them altogether, choosing not to bother if I was in a rush or someone was waiting for me outside the bathroom door.

In time, though, the bracha and I would have an unexpected reunion. I’d spent decades using the bathroom in the same way most people do. The experience was uneventful as a rule, so normal, in fact, I took it for granted –  until what had been with me forever, what was still working just moments earlier, suddenly came undone. It was Shabbos, the pain unbearable, when I nearly lost my colon to an infection. A few years later, my bladder would prolapse in a Starbuck’s restroom on my birthday.

Blessed are You, G-d, Who heals all flesh and acts wondrously.  As You well know, with medical assistance and Your divine intervention, my body returned to itself.  While I healed, I filled with incalculable gratitude for the self-contained industry of comings and goings You created inside us. When in good working order, they keep us whole. When not, they can deny us everything – our independence, our general health, even the strength and ability to pray.

Not that my faith ever needed it, but I’d found proof of Your existence within the tiled bathroom walls, inspiring me to pick up the Asher Yatzar blessing where I left off. One day, I may ask someone to cross-stitch a sampler for me that says “Don’t forget to say Asher Yatzar!” I’ll hang it on the wall outside the bathroom door, not far from where a mezuzah would have gone, to ensure that I never let You or the blessing slip away again.