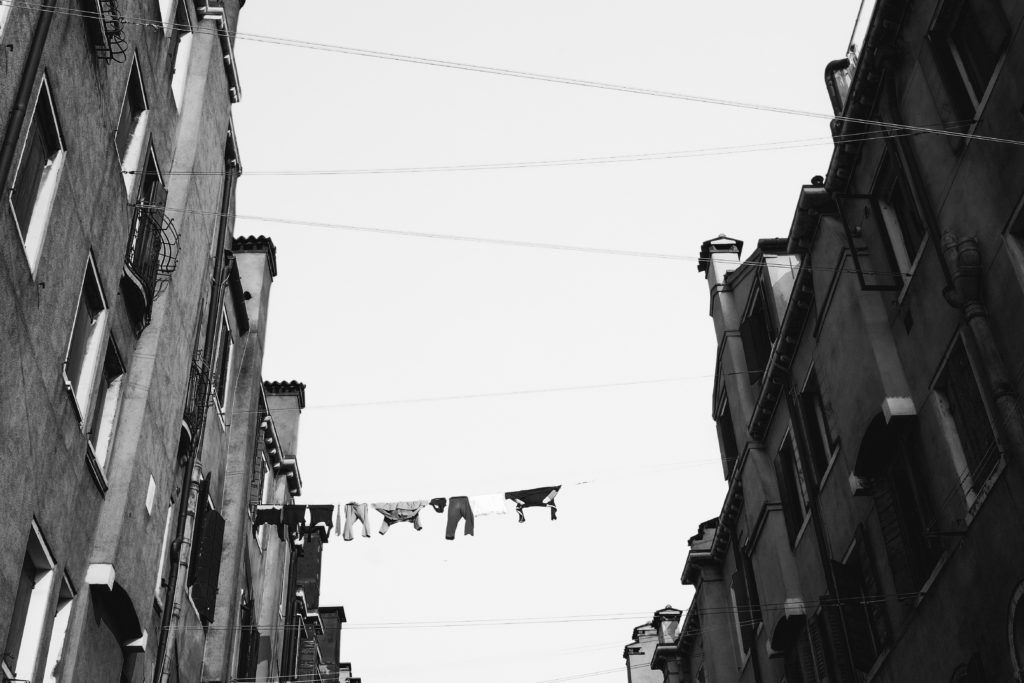 For The Love Of Laundry

I’m in our laundry room, and the washing machine and I are staring at one another – her dials chrome and sparkling, my eyes dulled and tired. She’s the fourth machine in this house, an industrial grade model designed for heavy duty use.

There’s a kindness between us I didn’t share with her predecessors. She knows my secrets – the fluctuations in my dress size and the frequency with which I wear the same outfit and so many other intimacies. Still, she’d never judge, just as I would never quibble with her efficacy. She has seen how I’ve changed over the years, felt the passage of time, too, and these truths catch at both of our hearts like a knit sweater come undone in the spin cycle.

This easy rhythm to my relationship with laundry is new. For decades, it was complicated and fraught, entwined with the emotions underpinning my heart. Because no matter what else was going on – births and celebrations, losses and loneliness, the highs and lows of being human – there was always dirty linen and clothing to contend with.

I remember learning to operate the washer and dryer in my childhood home, embracing it as a stroke of longed-for independence. But faced with the inconvenience of communal laundry rooms in the bowels of college dormitories and apartment buildings, I became a cliché. I wanted to stand on my own two feet. And yet, I dragged my laundry back to my parents’ house to wash it every other weekend.

No matter where I did it, laundry was an intrusion into my adult world. It stole time from studying and working and trying to make my mark, from hanging out with family and friends, too. There was always more of it, though I did not grasp then that the teeming mix of professional, casual, and dressy clothing in the basket was a sign that I was blessed and busy.

Life cycle moments left their footprints in the laundry room as well. Marriage brought with it countless wonders while compounding the volume of wash that required tackling on a weekly basis. In the division of household chores, this one was mine. The task became Sisyphean once our boys arrived and began to produce mind-blowing amounts of laundry disproportionate to the size of their bodies.

There was a brief window of hope when we left the city for the suburbs, landing in Apartment 4L, which had its very own laundry room just inside the front door. The convenience promised to be life-changing, but the love affair was short-lived. I’d leave for a long day at the office already exhausted, having stayed up late doing wash. Then I’d return home following a dreadful commute to a pile of soiled onesies that proved the work life-balance a myth. Nothing changed when we moved into our house.  No matter what system I devised, I never managed to keep up.

When the needs of my children forced me to let go of a job I’d held for over a decade, folded towels were often my only tangible, daily progress. Though I have no regrets about my decision, there were moments when I gazed into the drum of the machine and caught a glimpse of my own emptiness, self-doubt slowly filling it up.

As the boys grew bigger, their clothing got larger and they became moving parts as teenagers are wont to be. But their laundry, produced at the same frenetic rate at which they consumed food, squatted in the space they left behind. Thank G-d, my husband went off to a job he loved each morning. Meanwhile, I lagged in his wake, worried I wasn’t pulling my weight with the part-time gigs I grasped at for their critical flexibility.

Not a moment went by when I didn’t consider myself an imposter in nearly every aspect of my life – as a writer, mother, housekeeper, caregiver to aging parents. Yet with my new schedule, I finally managed to wrangle the laundry rodeo. It gave me a false sense of control when I otherwise had none, allowing me to embrace fixable problems like the stains I could Shout out. I may have been wiped out from the business of living, but everyone had clean clothes. At least I was accomplishing something.

Many years have passed since I made that tentative peace with the laundry. But it is only now, as I stare current realities in the eye – the approach of an empty nest, the facts of middle age, a meaningful new career – that I regret squandering the blessings that were there all along. The boys more often than not do their own laundry, and I confess to missing the intimacy of putting away their clothes, of being integral to their daily lives. Meanwhile, washing my husband’s Shabbos shirts reminds me that our co-mingled laundry is a metaphor for the life we’ve built together, the basket fuller than our joint checking account.

This sensation of gratitude still catches me by surprise. I’ll take it, though, for laundry is real and raw, tethering us to our place on earth. At the same time, our memories find a home in our garments, transporting us back to magical people and places or sticking around no matter hard we try to scrub them away.

I often recall rubbing mud out of the hem of the black skirt I wore to my grandmother’s funeral. I also cannot shake what it felt like to wash an Everest of baby outfits and booties on nights when I was too tired to even dream. Yet only now do I understand that it wasn’t the million tiny onesies that winded me, but rather the love and hope that went into folding them.

These days, the activity in our laundry room has begun to play in reverse. Our eldest lugs home his laundry in a duffel. Another has flown the nest, too far away to bring it here. Fewer loads have cleared the view that was obscured for so long.

“It’s beautiful,” I whisper to no one in particular, winking at the washing machine as I turn out the light.