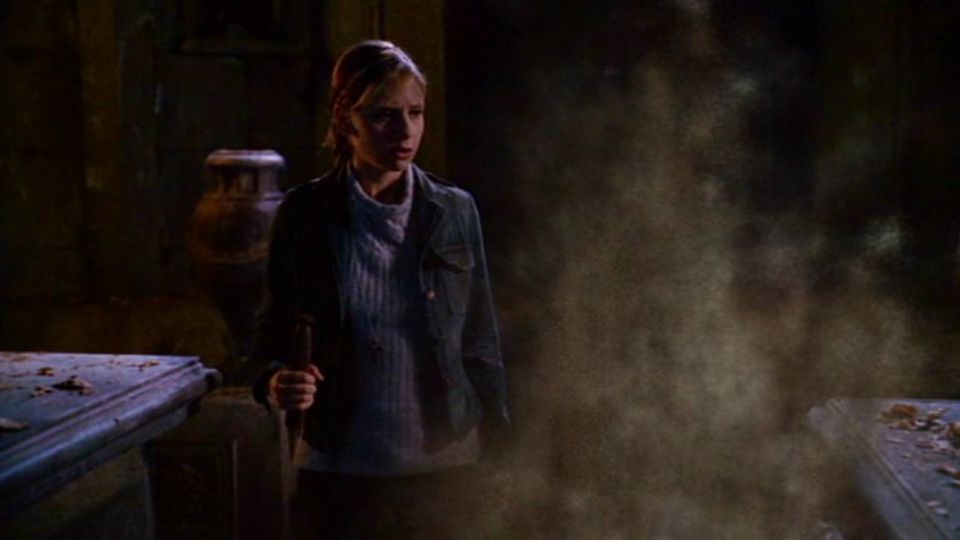 I have this friend, we’re so close and we share all our secrets. She’s always there when I call her. She gives me advice when I need it and talks about airy stuff when I don’t. I’d never get a cell phone, but if I did, she’d be the only one with the number. We’re like that. We know all each other’s secrets. she knows I’m an Orthodox Jew. I know she’s a vampire slayer.

We go to clubs together, cruising. I wear my knit hat so no one sees my skullcap. She carries her stakes inside one of those gap-girl baby backpacks. We tease each other unconsciously. I wear hats so no one knows I’m Jewish, in that trembling honest moment before the first kiss they don’t say “Is it ok that I’m not Jewish?” It’s difficult to be an undercover superstar. Just because I have a mystical consciousness doesn’t mean I don’t want girls the way I do. And my friend, the last time she fell in love it was with a vampire. They would stay up all night talking, and when she’d finally fall asleep with him and wake up mid-morning with the soft sunlight on her face, he’d be gone.

I’d have to leave too. Morning would come into these rooms where I woke, half-familiar dorm rooms and efficiency apartments, and I’d have to go say the morning prayers. I always said to myself that I’d come back, but they never wanted me to. It wasn’t about sex to me, though. It was about knowing I was still wantable. I was always afraid that, studying my Talmud too much, being in a relationship with G-d that forced me to do so many things i’d be too gone for anyone to think of me as desirable in any kind of social scenario.

Late Friday nights, she’d come over. Friday night was Sabbath, I’d be out at dinner at the rabbi’s listening to his kids, and then I’d come home and sit around. She’d knock on my door and come onto my bed, tossing her stakes and a bloody jacket on the hardwood floor, hug my pillow and my stuffed penguin Opus. She’d been patrolling at the cemetery. Vampire hunting.

But on my bed, in the dim lamplight that i left on all night for the Sabbath, she looked about fourteen years old. so small. I could never tell her that, because I’d seen how lethal she could be.

Neither of us were very good at looking at our potential, we were so weighted down with the things we actually did. She killed so many vampires, maybe 20 or 30 a night, all dust now. But dust made it seem less fatal. Killing them was like a video game, after a while you forgot exactly what you were doing.

I’d only ever killed one once. We were walking home from a reading and there was this vampire standing there, sucking at an elderly woman’s neck right outside this fancy French restaurant. I was startled at first. The vampire threw down the body and pounced on me and threw me across the patio. I wasn’t even on the patio. I landed smack in the middle of the menu board. It shattered like it was glass.

They were fighting, the vampire and her. I was just in the right place at the right time. I realized the menu board under me was made of planks of wood, like they are. When the vampire hammered her down and came over to check on me, I threw it straight into his ❤️.

There are certain things you’re not supposed to touch when you’re a Jew. Unclean animals, the opposite sex (when you’re not married to them), certain foods, your own feet, on the bottom.

Weird, that that was the first thing I thought about just then. It’s not like I could do anything about it.

She was standing over me, holding out a hand to pull me up. Without thinking, really, I took it. “Hey,” she said, trying to sound all cool and nonchalant. “Nice job.”

“Thanks,” I smiled, shakily following her away.

Sometimes, those Friday nights, I wondered what I’d do with my life if I wasn’t a Jew. The way we see life, you spend a good part giving thanks to your Creator, because G-d is the reason we’re here at all, and the rest of the time you do what good fun things you can. These were the things I understood, the jobs we were used to, the ones that put meaning into our lives. My friend who was a vampire slayer, I could understand her. Sometimes I felt like we were all that we could understand.

You know how people say that a secret’s not a secret if only one person knows? I always had to share my secrets with one person for them to stay a secret, and she was always that one person. We were friends, I’d never say that she was my best friend, but that was because friends were up close to the border of you. And she was inside my border, that’s where we were the best together.