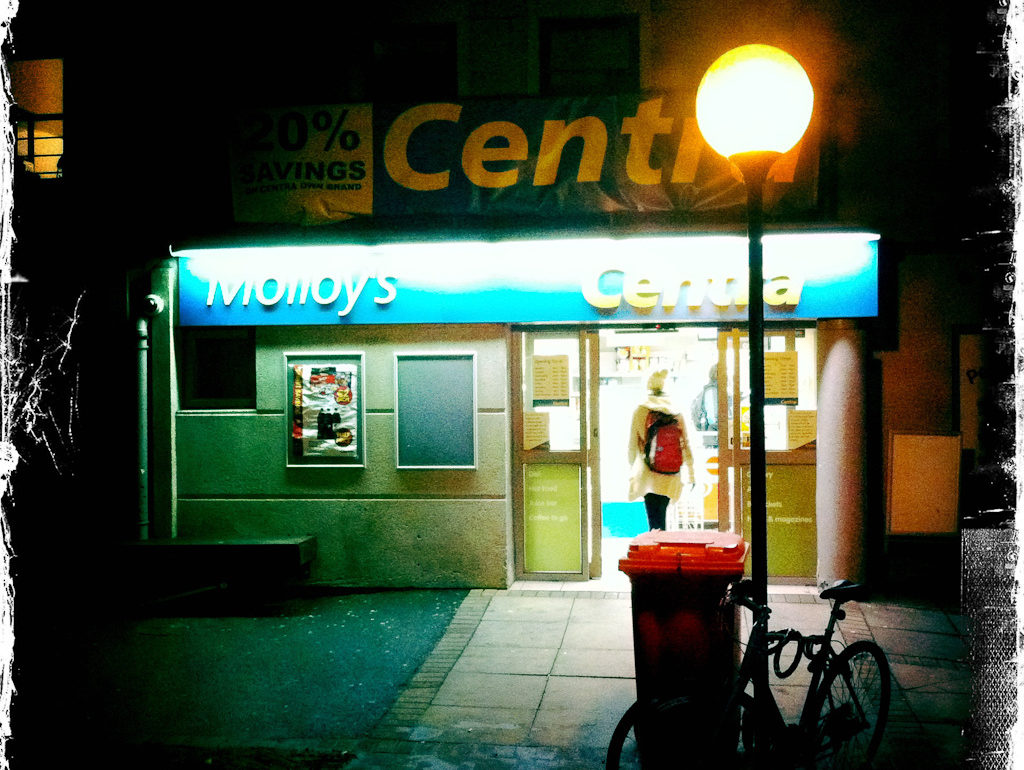 Zvi needs to leave Crown Heights behind, and he is leaving it behind, but every step he takes brings him a new wash of sadness, the nostalgia sinking deeper into his brain and skin and his nose, even though he hasn’t even left yet.

Every inch of the store serves him with a different memory. The ice-cream freezer by the door that his friends for years tried to convince him to let them have just one, just a small one. That maddening tangle of cords beneath the soft-serve machine, just far enough apart so two boys could hide together. The aisle of flavored corn chips where he told Elki Kessler that he liked her, and she had laughed at him, their heads barely higher back then than the bar-b-que row, and afterward he had fled to the baskets of Bamba, that deep-fried Israeli snack food that looks like cheese puffs and tastes like peanut butter, which no one over the age of 5 actually ate but he still secretly loved, and flooded his mouth with bag upon bag of them until his father came and saw what he had done and made him pay back every bag out of his earnings, dollar by dollar, over the next four months of his life.

Tomorrow morning Tzvi is driving to somewhere in Iowa, a place that so far he’s only seen on a map, where he’s enrolled to start his first semester of college. This is an unexpected development for several reasons, the most notable of which is, he’ll be going to school with mostly non-Jews, and with women, but the one which feels the most significant, to him if to nobody else, is that Zvi just isn’t that smart.

Oh, he’s not bad in school, and he reads a lot, and he’s good at sneaking under the radar at stuff — that’s how, in spite of not studying any secular subjects since the fifth grade, he flew through the state achievement tests without preparing at all — but he’s never been what anyone would ever call smart. He thinks of the past twelve years of yeshiva education and tries to remember what he did all day, and all he can think of is — snack breaks? telling jokes? hiding from teachers with Elkanah, his closest friend? Why does nothing he’s done for the past ten years feel real?

The college in Iowa doesn’t feel real, either. Tonight, surrounded by the four walls of Noshland, the sweetshop that his father owns, that he grew up in, it seems like there’s no other place in the universe but this.

The room seems smaller than it ever has. The walls are peeling in the upper cracks. He’s never noticed it before. He should grab some paint and paint it over — but when? He’s here alone tonight, and in the morning he’ll leave. The store stays open late, to scoop up the after-weddings crowd and the after-Bar Mitzvah crowd, neither of which really counts as crowds, but they took their customers where they could get them. Selling dollar sugar cones and 25-cent bags of Ko-Sure brand potato chips wasn’t exactly the most profitable business in Crown Heights, but it was what his family did. It was what, since he was old enough to mind the register, he did.

The door swings open and Zvi straightens up his shoulders, tries to look more professional, a quirk of the job he’s taken from his father, although more often than not the customers don’t care. They barely notice you’re alive, the women especially, whether out of modesty or an expectation of servitude he could never fully decide.

Not only is this customer not a woman, though, it’s not a customer at all — it’s Elkanah. Zvi gushes with emotion, the last time Elkanah will surprise him in this way, when Elkanah says, “Stop looking like your favorite puppy just died, Zivvy. I’m not here to say goodbye — not yet. I’m just stopping by on the way out.”

Since they were first allowed to go off alone, people have being asking whether Elkanah’s still religious, or has he gone off the derech. People ask it so often it’s morphed into an acronym, Is he OTD or what?In asking Zvi, the question-bearers reveal that they consider Zvi not yet OTD in their estimation — he’s still religious enough, or enough of a snitch, for his own measure of religiousness to stack up against their test doubter.

Elkanah isn’t OTD, of course. He’s too careful to commit to heathenism just in case the whole G-d thing turns out to be true. In the years that Zvi’s known him, Elkanah has been unfailingly selfish, greedy, egotistical and dangerous, but he’s never gone the extra step of outright apostasy. He’s too clever to go public, and also he doesn’t want to hedge his bets.

He takes a packet of falafel-flavored Bissli off the shelf, and Zvi finds himself wondering not whether he’ll pay for it (with Elkanah, the odds are always about fifty/fifty; sometimes his favorite way of being surprising is to be unsurprising) but of what Elkanah’s plans are tonight, and whether he will let his breath keep smelling like falafel crunch when he meets whatever girls he will inevitably be meeting. Elkanah was always more successful talking to girls than Zvi, or maybe just more daring. Things have always meant too much to Zvi, and because of this, he has always been afraid to let things just happen.

“You want to come along?” says Elkanah. “Just close up early? Last night in town, it should be a night on the town.”

“Yeah,” says Zvi, too slow to be credible, “but I really can’t. The register’s too low. My dad would notice.”

Too quick, Elkanah cuts him off. “Don’t worry, I’ll stop back later. You’ll get another chance,” he says. “Just one thing. A friend of mine might stop by a little later. Can you pass on something for me?”

Sure, of course. Zvi and Elkanah have been doing this their whole lives, helping each other out, covering for each other. Most of it has been Zvi covering for Elkanah, though.

The laugh that follows is loving and mocking, comradely but distant. “It might be,” Elkanah says. He lays the package on the counter, walks out the door backward. “If she is, talk to her a bit. Hang out. She’ll like you, maybe.” He starts laughing again, and the laughter sticks around longer than he does, echoing in Zvi’s head after Elkanah is gone.

The package, then. In all the years of knowing Elkanah, it’s probably the most surprising thing he’s ever given him. It’s a bag of marshmallows. A regular 16-ounce bag colored with a harsh opaque rainbow and bulging stay-puft letters. When he picks it up, though, it feels decidedly not marshmallowish — not squishy but stuffed, and decidedly heavier than the airy not-thereness of marshmallows.

And Zvi knows marshmallows. He’s probably shelved six thousand bags of them since he was a boy. But he’s also known Elkanah forever. He tucks it under the register, folds his arms, and slouches into a half-stand. He faces the door, waiting for the night to send him something special, waits for the neighborhood to give him a reason to stay.

It doesn’t come. An hour later he has seen then come and go, witnessed the most typical night of his life. A gang of boys, already doped up on sugar, not to mention the pent-up adrenaline after sitting in front of a Talmud for ten hours, cleans them out of sugar sticks. Two girls a few years younger than Zvi buy a menagerie of family-size chip bags. He listens to them: they are making a goodbye party for a friend who’s officially going off to seminary, but it’s right near the home of a guy she likes so it’s probably her engagement party too. One of them pays for their purchase with a credit card with somebody else’s name, a man’s. A boyfriend? A father, Zvi tells himself, and tries to trade smiles with one of the girls on her way out, the less obviously pretty one. She misses it.

Photo by Seán Ó Domhnaill. Also, you can read a little commentary track about the story here.