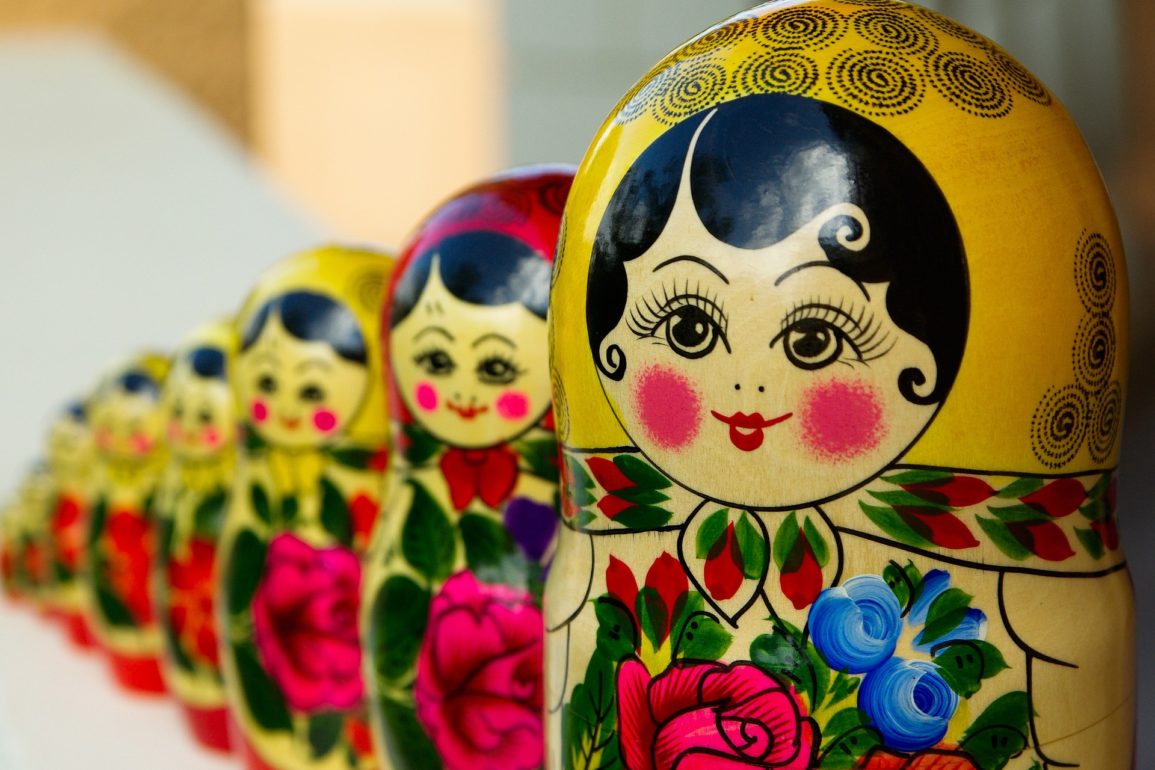 A matryoshka lies on her side, brown eyes unblinking, pink lips curled into a goodnight-kiss smile.

Her hair rises up above her head in a neat chocolate bun. Her seashell ears curl into secret-keeping nooks. Her cheeks glow hearth-fire red.

The matryoshka lies with her arms open, revealing hills that flow with milk and valleys that curve for nestling, both swathed under layers of purple peonies.

Her body is a garden made to feed, to nurture, to soothe.

But there is something wrong.  A strange swelling, a crack in the paint, a rumbling gash of red slashing through the peonies.

From deep in the valley, a low hum gains strength. The One Inside is stirring.

The matryoshka puts her hands to her ears, her fingers to her lips.

She slides her hands down over her curves and valleys, putting everything back in place.  Just so. Just so.

For a moment, the One Inside is still.

But then the rumbling starts again.  The crack gets deeper.

The matryoshka’s frantic fingers fly over the swelling peonies. She blows air faster and louder through her lips to quiet the growing hum.

Long scarlet nails push up through the garden, slash through the mountains, puncture the valleys.

The smell of wet lavender and underground things snakes up from the punctured valley. The mountains quiver and shake off their floral weights. The peonies scatter, one behind her seashell ear, two between her parting lips, three down deep where the valley dips into hidden coves.

But the matryoshka will not concede. She fusses her fingers through the springing curls worriedly, she runs her hands over the mountains and down the valleys sternly, she whispers and coos to the One Inside softly, gently…

Go back, go back, dear one.  Rest inside now.

From deep in the valley, a solitary scream rises up over the battered peonies, over the quivering mountains, over the matryoshka’s hushing.

Just then, a man walks by and finds the matryoshka. Her bright colors and strange smells intrigue him. Her bare hills and valleys excite him. This is not the matryoshka he remembers from his childhood.

For a few moments he holds her close to his body, feeling the thrill of a new discovery.

But then her cracked body begins to scratch his hands, her musky smell begins to turn his stomach, her naked hills and valleys begin to unsettle his heart.

He shrugs his shoulders and drops the matryoshka in the trash.

Deep in a rotting junkyard, a matryoshka lies on her side. Her lips are a bloody gash, her hair a tangled mass, her voice a rasping cough.

And down below, where the hills once flowed with sweet milk, where the valleys once nestled resting heads, where the One Inside once tried to claw her way out, prickly rose vines have pushed through, choking the last of the peonies.