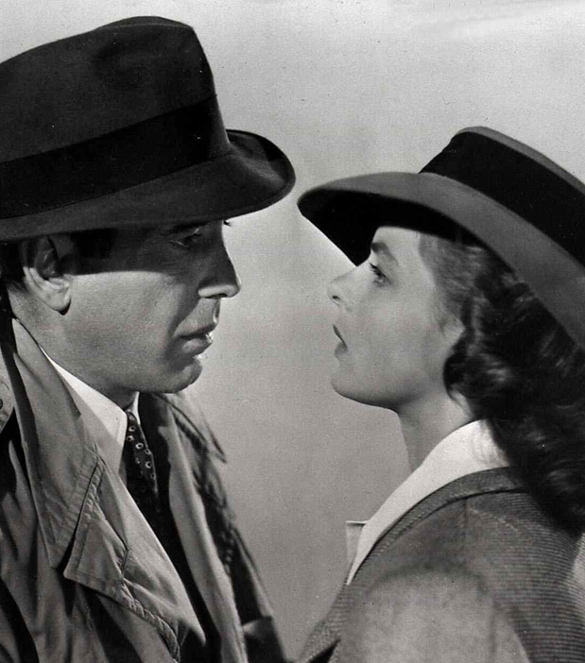 llsa: I can’t fight it anymore. I ran away from you once. I can’t do it again. Oh, I don’t know what’s right any longer. You have to think for both of us…. Casablanca, 1942

I was at a Shabbat dinner awhile back where, at some random point, one of the men there said he’d watched the movie Casablanca for the first time. “I heard it was romantic. But I didn’t think so. I thought it was immoral.”

There were ten women at the table and all of their heads turned toward him in unison. It was a little weird.

He noticed and looked a little uncomfortable, but went on, “Well, the two of them were having an affair, and she was married to the best man in the world.”

After a couple of beats of silence, comments were made by most of the women which came down to: “How can you say that? I always though it was extremely romantic.”

Then, of course, politeness, and a good dinner with a good wine, had everyone moving on and settling in to eating and drinking again.

But I haven’t been able to stop thinking about that conversation. It keeps coming back to me at random times.

Watching that movie used to be kind of an annual tradition with me. I was more than a little surprised to realize how many years it had been since I’d seen it. The last time I remember watching it, I was sitting cross legged on my bed eating a mound of fried rice covered in Sweet and Sour Chicken. I still lived in California, so that was over half my lifetime ago, when sitting cross legged was still an option. (Unlike now, when just thinking about doing that makes my knees start to ache.)

While I was sure I also thought the movie was “extremely romantic” I wondered if I was remembering it the way that it was. More than that, I know that my personal opinions about romance, and about love, have changed a lot over all these years.

I mean, I’m no longer certain what romance really is.

And love. Do you know what love is? If you do, consider yourself blessed. I’m pretty sure I don’t know.

I’ve had, and have, some amazing friendships that I value almost above all else, so I’m willing to say that I felt, and still feel, friendship very strongly. I was also blessed to have had a ten year relationship with one of the nicest men I’ve ever met, who I am pleased to say is still my friend. (Actually, so is his current wife.) Even so, as much as I wanted to feel that way, I can’t honestly say I’m sure that I have ever felt romantic love.

Like, respect, admire, care about, desire. All of those. Absolutely. But love? About that I have no certainty. I just don’t know.

Growing up, I never saw a model of any kind of love in my family. Whatever they may have felt, nothing showed: toward me, their spouses, or each other. I can’t even say they did not love. Only that I never saw it or felt it from them.

And my life unfolding as it did, it wasn’t hard for me to follow their example.

I was a fat little kid, and I grew up to be a fat teenager; so I didn’t have pretty going for me. I was smart, but never the smartest; so I didn’t have that going for me either. Nor was I ever even a little bit athletic. That was pretty much three strikes against. I was out, or an outsider anyway. Not a thing going on to make me one of the popular kids. I had a few girl friends, and some un-reciprocated crushes, but, as you’d easily guess, never any boy friends.

When I got to college, it was the hippie-dippie days . Not that there weren’t some good things about it, but free love turned out to mostly mean free sex. It took a lot of years, and a lot of strange almost-relationships, before I even figured out that sex and love weren’t the same thing. (In case you might still be confused on that point, they’re not. Having experienced “free love” definitely makes me think that the Orthodox way of being shomer negiah and dating only for marriage has a lot going for it. But I wasn’t Jewish at the time, so I didn’t realize anything like that was even an option.)

After having the above conversation haunt me for months, it became obvious that I needed to watch Casablanca again. Maybe I’d find out what love and romance really are. Or at the very least I would see a good movie: it won three Oscars, and was nominated for five more; and is a film that consistently ranks near the top of lists of the greatest films of all time.

That much turned out to be true: it is a very good movie.

Through the years I’ve seen a lot of movies where two extremely pretty leads generate exactly zero chemistry together.

Humphrey Bogart, the male lead, was never pretty. And Ingrid Bergman, the female lead… well… she was not pretty either. Her face, her presence went way beyond simply pretty. If you want to understand what the term “luminous beauty” means, see her in this film. Even in the shadows where they often placed her, for atmosphere I suppose, she was radiant. Her beauty absolutely glowed.

Still, how they looked wasn’t the point.

OK, yes, it was acting. But their acting is another definition. This time of on-screen chemistry… they showed that they loved each other. You can feel it right through the screen. Did they have an affair? I guess that depends on your definition of “affair”. There was definitely passion there, even though the most exciting thing you ever see them do is kiss. There was never even a hint of more. They didn’t show bedroom scenes in the 1940’s when this movie was made, so we’ll never know if their “affair” made it that far.

But as I watched it this last time, I started to think that, just maybe, this film isn’t even a “love story”.

Oh, the love between Rick and Ilsa is central to the story.

In Paris, Ilsa is alone and thinks her husband, a good man that she respects more than loves, is dead. Rick, a freedom fighter who fought for the right side in two lost cause wars, is a good man with an undisclosed, not-so-good past. When they meet each other, both meet the great love of their lives.

Then, as the Nazis begin their invasion of Paris, Ilsa finds out her husband, a famous and inspirational leader of the Resistance, is alive. She is faced with a choice: she can disappear with the love of her life, or go to the husband who needs her, as he always did, to accomplish his world changing work.

Then comes one of the scenes where you see that this movie is absolutely, totally, completely romantic.

Unable to leave Rick if she meets with him, Ilsa has a letter delivered to him instead.

When you watch the words of that letter wash away in the rain as Rick reads it, if you have a heart, it breaks… along with his.

Later, they meet again in Casablanca, where Rick’s understanding that she did not lie to him about the depth of her love, or leave him for another man, redeems him from his bitterness and pain. Then he is faced with a similar decision: should he allow his great love to stay with “the best man in the world” who still needs her as much or more than the world needs him, or should the two of them escape to live out their lives together in safety and peace?

Rick does decide for both of them… that she should stay with her husband.

And this, too, is a definition of true romance. Or at least I think so.

As far as love. All of Casablanca is a meditation on love: based on respect (Ilsa & Victor), based on loyalty (Rick & Louis Renault), based on passion (Rick & Ilsa). Maybe romantic stuff only happens in fictional worlds. It has certainly never happened to me, so I can’t say. But it radiates from this movie.

As a side point, when I watched the movie those many years ago, I never saw it as the propaganda piece it is. It is virulently anti-Nazi. The story was set in 1941. Casablanca was rushed into release in 1942 to take advantage of the publicity from the Allied invasion of North Africa that happened a few weeks before its world premiere. Concentration camps are mentioned, but this film was never meant to be about what was happening to the Jews. It’s a piece for another time, but it always amazes me how so many books and movies set in World War II manage to completely ignore what was happening to Jews.

In any case, this movie wasn’t really about the war either. It used the love between Rick and Ilsa, in contrast to the anti-love horror that was the Nazis, as a means of reflecting on love of all kinds surviving, even thriving, in the face of great evil. (And, as a bonus, you get great acting and an unforgettable song, which for you trivia fans was almost left out of the movie.)

Coming back to that Shabbat table where all this started, if I were sitting there right now, politeness, wine and dinner aside, I’d respond this way to the man who was the motivation for all these words:

“Pardon me for saying, but you are wrong. I don’t think you can call either Ilsa or Rick immoral for falling in love, given that Rick didn’t even know Ilsa had a husband, and Ilsa thought her husband was dead. And both, independently, made the choice to honor her commitment to that husband. Both of them ultimately chose honor even over so great a love as theirs. Casablanca is not only one of the most romantic movies I’ve ever seen. It is also, ultimately, one of the most moral.”

And as for me – did I learn what love is, or what romance means, watching the movie?

But, at this point in my life, I’ve seen bashert though I have no hope I will ever feel it, and in this movie, I saw romance and love, though I am not likely to ever feel them either.

Watching Casablanca is going to come back into my life as an annual tradition, because I realize that it’s important to see romance and love so convincingly portrayed, so I can be reminded that such things may be possible, that there is hope that they are not just movie plot lines.

Because, if I lose sight of that, not only will I will end up a cranky, embittered old lady. I’ll end up much worse: the kind of cynic who doesn’t recognize G-d’s love either.

And that simply is not a person I want to turn into.