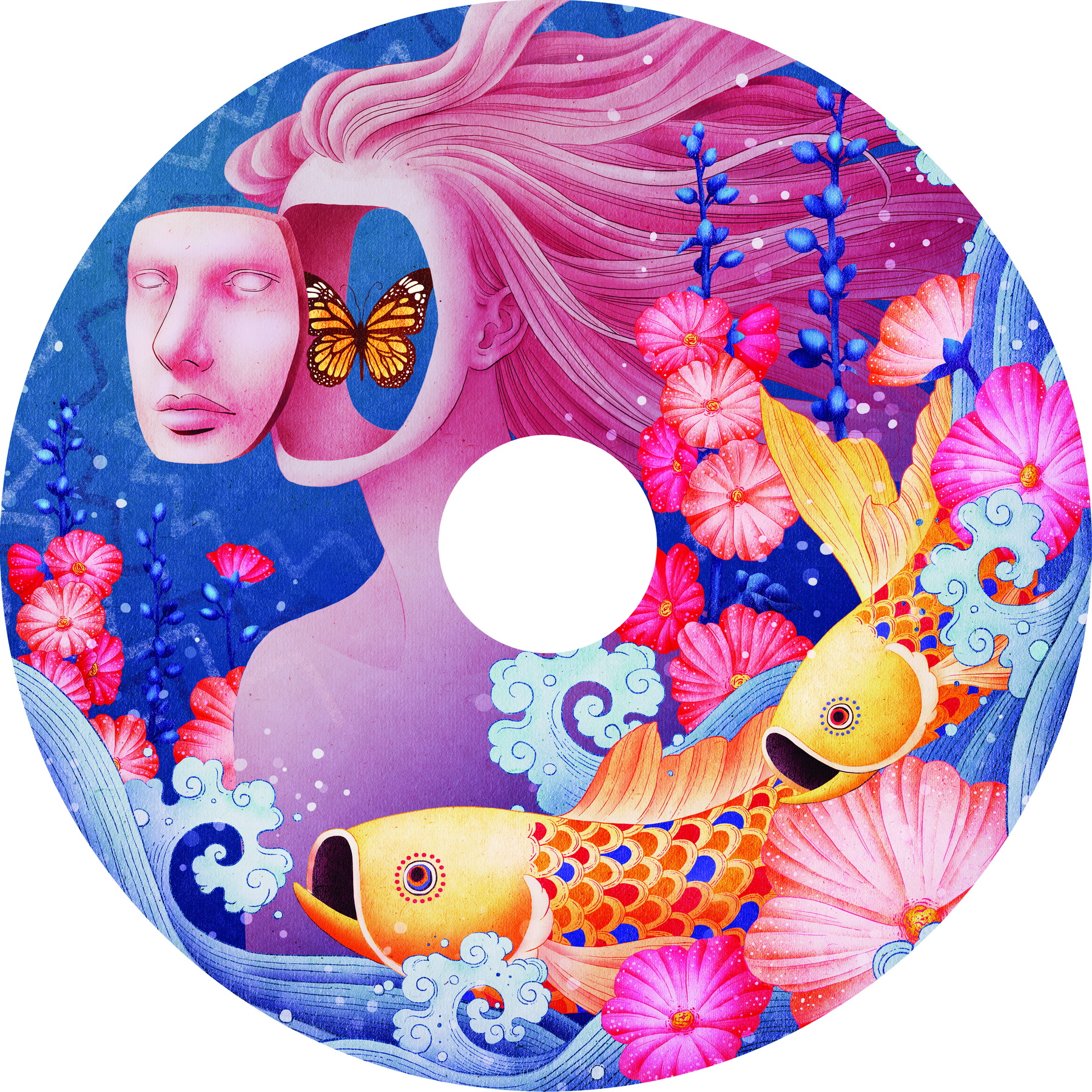 Approaching Time As A Flat Circle

Three years ago Jorian Polis Schutz began an art project that he called the Misaviv Hebrew Circle Calendar. Everything we take for granted about time and the way we mark its passing would be examined and reframed through a circular lens, the way that he claims Judaism itself intended time to be envisioned. Each year he has collaborated with visual artists and a small team to assemble what is planned as a seven year cycle, each year improving and evolving from the previous.

I have been involved tangentially as the project has blossomed and last year I collaborated with Jorian on an artistic video of its own merit to promote the project. As we approach the new Hebrew year, the third calendar has been released and I felt it was a good opportunity to speak with Jorian to better understand his process and thoughts behind the Misaviv Calendar.

Saul Sudin: So let’s begin with the beginning. Why did you begin the Misaviv calendar three or so years ago?

Jorian Polis Schutz: I’m a Baal Teshuvah (returned to the faith as an adult) and the second year I was an observant Jew, I was paying attention to the repetition of the Jewish calendar. It was then that I had a revelation that the shape of Jewish time is a spiral. I realized that everything you do the previous year feeds into the next turn of the wheel. I remember very clearly having that insight, and asking myself why we don’t have circular calendars?

Every time we consult a clock or a calendar, it is really a deep thing. It is a cosmic energy that we are drawing into our life. We shouldn’t forget that really time is the fundamental thing that God has given to us. So each instance of connecting with an idea of time is a powerful moment to connect to the Divine. That has to do with the unification of the linear and the circular, which is the spiral.

SS: This is something I’ve thought about as well. I too think of the Jewish year as a spiral, and that there are these connection points that are sort of vertical staves through a sort of slinky in time, as it were, and that a particular day, maybe a holiday, is a vertical spike. We find ourselves either moving up the spiral or moving down the spiral, depending on what procedure you are going through in your own life. So, how did you decide that you were going to make it a flat circle, instead of something three dimensional, something that plays on the spiral?

JPS: Well, I guess the answer is practicality. I have seen a prototype of a spiral type calendar, and I’ve also had somebody imagine our calendar as a sort of polyhedron. Both of those ideas I love, but they certainly would be costly to produce, as well as to sell. They also would require some sophisticated manipulation whereas our calendar is designed and printed and spiral bound, but we are able to keep the price point beneath $30.

SS: So, once you realized that there were no other circular Jewish calendars out there, what other steps did you take to create this as a practical product?

JPS: A couple years after that initial realization in Yeshiva I mentioned the idea to my friend Elisha Mlotek and that sparked the project between us. We sketched it out and did some preliminary designs and it just snowballed into reality from there.

SS: For someone who is unfamiliar with the Misaviv calendar: what is the layout, and how do you interpret circular time?

JPS: You start each week on Sunday or Yom Rishon in the outer ring. You move each day, one ring in towards the center, which is Shabbat. And then each week is a different slice of the circle, starting at the top and moving counter clockwise or moonwise. JPS: Right. You could imagine if you are creating a linear calendar, that all the Thursdays are on top of each other, but there is no center. So in a rectilinear calendar, you sort of fall off the edge, but in our calendar you go to the center. So each week is visualized as the path as moving towards the center.

SS: That’s interesting because a typical rectilinear calendar moves left to right, and yours moves not only right to left like Hebrew script, but from the outside in.

JPS: That’s correct, but I would point out further, that most Jewish calendars are based on the Gregorian month, and the Hebrew months are only incidental. This is also a new idea to really have each turn of the page be a new Hebrew month. They begin and end with the new moon, so they really lend themselves to the circular form. I find it surprising that even the most religious calendars follow the Gregorian calendar primarily. It mentions when it is Rosh Chodesh, but it doesn’t necessarily turn the page at that time.

SS: At what point did you decide that you were going to keep the tradition of having the bottom half of the calendar be days of the month and the upper half be artwork?

JPS: I think pretty early. We tried a few different designs for the days and weeks, but I always knew there would be art on the top. That just made sense to me, how they would be connected wasn’t clear at first, but we iterated some designs and came up with what we liked. I always had the idea that the circular design would be matched by an artistic vision.

SS: So, do you see this as an art project or is it a practical item? Or is it somewhere in between?

JPS: It is definitely both. I think some people get caught in that binary and don’t use the calendar as much as they admire it. It is possible to write on it, and to use it on a daily basis. This is my hope for the calendar, and I think that is a wonderful thing for art to aspire to be, to be a part of something that is functioning. There definitely is a very strong tradition of ornamental objects and beautification of ritual acts, which just shows you how rich and beloved elements of the Jewish year are to Jews. Jewish rituals are endlessly re-frameable and that each culture and each generation can put their own spin on a Seder plate, a Haggadah…

SS: …A dreidel. You have to make the pun that we can make our own spin on the dreidel.

JPS: (Laughs) Oh I didn’t even realize. And yes, I’m a bit at a loss to explain why the Jewish calendar has not been more often artistically rendered within Jewish history. I know it isn’t absent entirely, but I would have thought it would have been more of a genre.

SS: Let’s talk about how you are using contemporary visual art, specifically illustration and painting, to augment your ideas around what the calendar should or could be. You are not using historical images of Jewish art, you are having contemporary artists create entirely new pieces that you are commissioning for this calendar.

JPS: Each year we have a project manager who helps us find artists who do sketches for us and enter into a process of creating an illustrations for a particular month. We are pretty open in this process. I like to push illustrators out of their comfort zone, but by and large, we are receptive to the ideas that the artists really resonate with that connect to the month. We are always looking for a diversity of styles. We are interested in abstract, anti-figural art. We like comic-style, paper cut-out, digital art, painting, drawing- it’s all good. We go for diversity.

We also go for diversity in the artists. Women, men, old, young. Most are Jewish, but not all are. We have artists of Israeli, British, Italian, Argentine and American descent. We think the calendar should reflect the diversity of the Jewish people. We can’t just have one type of person’s art reflected in our calendar.

SS: So this is the third year that you have created a calendar. I’m curious about your goal here. Are you planning to do this as long as it is successful, or do you hope to do it every year for the rest of existence?

SS: And have you felt like you’ve gotten a positive response so far, through the two-plus years you’ve been doing it?

JPS: Yes. Everyone who has gotten their hands of the calendar has been really excited about it and impressed by it. Most of our sales on our website list “word of mouth” as the source. The calendar becomes its own best advertisement because it is hanging in people’s kitchens and dining rooms and guests see it and ask about it. When you have a good product that is meaningful to people, it grows, and we’ve been seeing that.

Every time one repeats something, (and this is also the circle, this is the spiral), one is simply more efficient, and understands it better, recognizing the stages of the project.

SS: I think that is beautiful because the Torah is consistently focused on time, whether it is God laying out the days of Creation, or the Torah continually recording the ages of people; how long they live or when they die. The Jewish people were given the mitzvah of blessing the moon as the first mitzvah when they come out of Egypt. This calendar is one way of fulfilling that mitzvah. Every time we flip the page, we are acknowledging the moon cycle and how it connects to us.

JPS: The original sanctification of the month happened only with the vision of the moon. A person in Israel had to see the moon for the declaration of the new month. This idea that there is a visual of a new month is not something that we can take in as significantly as back then, but when you turn the page on the new moon, you do indeed get a new vision with our calendar.

The Misaviv Hebrew Circle Calendar is now on sale at http://www.circlecalendar.com