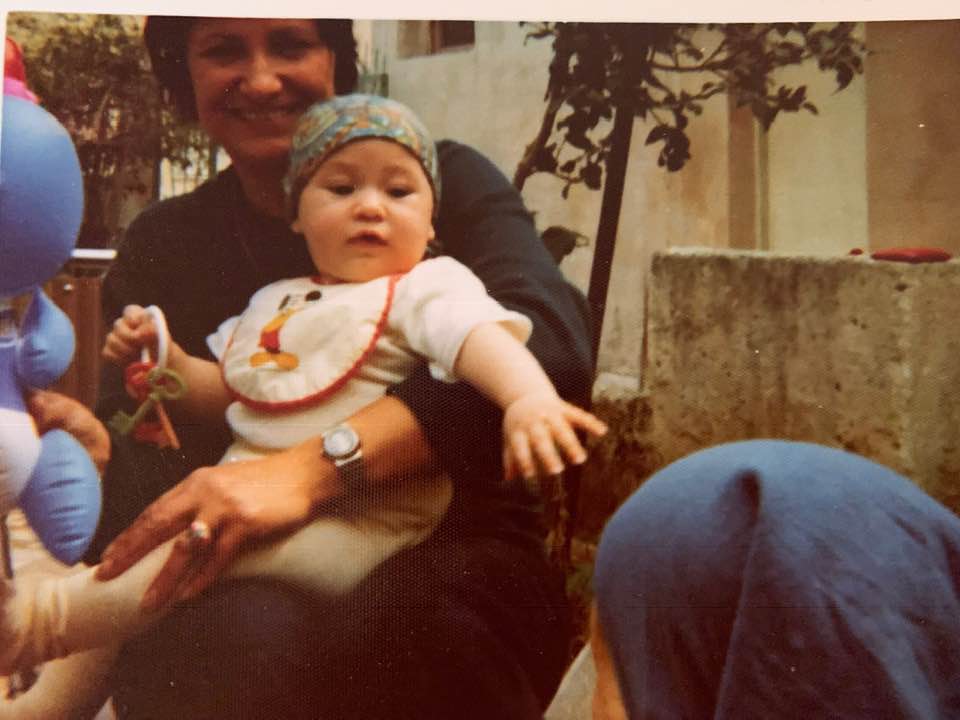 My parents are getting older and I feel an urgency to know more of who they are, who they were.  I sift through my father’s bookshelf, picking up some of his favorites… Hemmingway, Zane Gray, Faulkner.  Words that have been meaningful to him, that are part of his history.

But that isn’t enough. I want more.

My parents call me downstairs to have dessert, but I am on a mission to learn more about our family history and I don’t want to be interrupted.

I pull down a box of old photos.

There I am, a big butterball headed baby in my father’s arms. His hair hangs down over the sides of his face, blond and shaggy, half covering his new daddyhood punch-drunk smile of delight.

There I am, a toddler nestled into my aunt’s lap in Bat Yam, my head covered in a blue paisley scarf, one chubby hand reaching out towards my Safta, the other clutching a handful of plastic keys.

There I am, a kindergarten graduate with dark bangs and a big yellow hat, my mother standing beside me, poised and glamorous with her long flowing auburn hair, deep olive skin, and illuminating smile.

There I am, a middle schooler with oversized teeth and a Kermit sweatshirt reading Anna Karenina in a cold barn office.

There I am, 17 years old at the prom, a lacy white dress hanging down almost to my ankles, my arm linked into the arm of a tall, handsome dark haired boy.

There I am, 25 years old, on my parent’s farm, tall and thin with long dark hair, a soft white dress baring my tanned shoulders, my mouth wide open and laughing while my new husband gazes at me with teary eyes.

There I am, 28 years old at the Chabad house, round cheeks and fluffy body, my newborn son sleeping in my arms, a blur of black hats in the background.

What’s not in the picture are my parents… because the bris fell on Christmas Day, a day that they counted on to make enough money at the riding stable to get them through the long, barren winters. What’s not in the picture are my Catholic in-laws, who drove five hours on Christmas Eve to watch their first grandson be initiated into a religion that was not their own.  What’s not in the picture is my husband, holding my hand and comforting me as I cried later that night because the baby wasn’t sleeping AGAIN and, even when HE was sleeping, I was awake watching him, because maybe he’d stop breathing or maybe his heart wasn’t working right or maybe that little trickle under his nose was indicative of some far more sinister illness that would steal him away from us.

Here I am, 40 years old, my husband’s arm around me, my three children sitting on the floor beside their redheaded cousins, my parents and sister and brother standing alongside me, all of us smiling, our arms linked, our heads resting on each other’s shoulders.

What’s not in the picture is fighting and making up and loneliness and community and trust and betrayal and good food and bad company and bad food and good company and life and death and sickness and magic and pain and wealth and poverty and misunderstandings and faith and doubt and travel and connection and secrets and lies and hugs and kisses and love making and more fights and closeness and distance and turmoil and peace and truth.

As I look further back through the pictures I see people I’ve never met, some who died long before I was born. Just like us, they are frozen in time… their entire lives captured in one flash of the camera. I wonder about the stories behind the pictures. What secret love my great aunt may have been trying to forget, what grudge my second cousin may have been holding, what faraway destination my sister-in-law may have been dreaming of.

I’ll probably never know. Their lips remain tight, curled into elegant guardians of the past. stories.

It’s not that the photos aren’t true.  It’s more that they are the outer layer of the truth.  The glossy finish on the deeper depths that we all carry. In order to reveal those deeper truths, we need to do more than just look, we need to listen.

I put the box of photos back on the shelf and go downstairs. The kids are bellowing out some loud goofy song, my parents are laughing, my nephew is crying.

I am all ears.