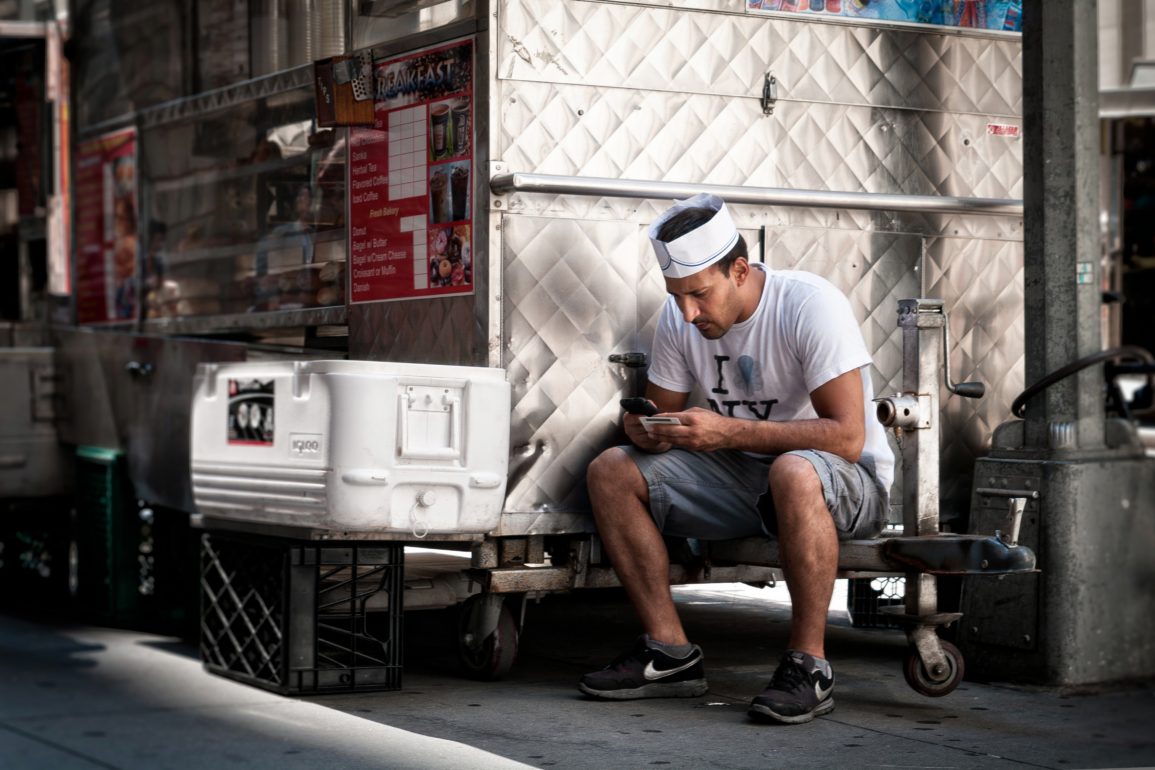 Talking To God On The Street

Thank you to Matthue Roth, one of Hevria’s dedicated and unpaid editors, who suggested this topic to me.

Hitbodedut (hisboididus, if you live in Brooklyn) is the practice of talking to G-d in your own words, also known as “personal prayer”. The word means literally “self seclusion,” but if you are like me (you don’t have time or patience to sit in a room and talk to G-d) you can do it on the street.

Since we live in the age of Bluetooth and all manner of mobile communication devices, it has become quite normative to talk to invisible beings on the street. In my neighborhood, I hear people even yelling at invisible beings on the street. Nobody thinks they are crazy because they’re on Bluetooth or have an ear bud tucked under their hair. Smart phones might be the downfall of Jewish civilization, putting smut websites such as L.L. Bean, ZooBorns, and irs.gov at everybody’s fingertips, but it has opened up the gates of prayer for all who want to do a mitzvah from the written Torah: We now can call out to G-d in public without even scratching the surface of a social faux-pas.

Although hitbodedut is a Breslov custom and is not a sanctioned part of Lubavitch spiritual practice, I actually started sitting and talking to G-d while I was in Lubavitch seminary, and anyway anyone who wants to stop me from doing a mitzvah from the written Torah (the deoraita commandment to pray) because it isn’t Lubavitch minhag can go eat her own sheitel.

Me to my rabbi: “I have a problem that seems like it cannot be solved.”

My rabbi: “Talk to the Aibishter.” And so I did. I started sitting outside a night, in a place where nobody could hear me, talking to G-d. And then G-d solved my problem through nature. I was hooked.

When I was living and working in Jerusalem, I used to talk to G-d every morning as I walked to work (45 minutes there) and every evening as I walked home (45 minutes back). If I was having a bad day, I’d go out for my half-hour lunch break to talk to G-d. Things happened for me that were above nature. The day I got my Israeli citizenship, I got the job that I’d have for the next three years which ultimately sent me to America on a business trip, where I met my husband. We now have the number one cute baby of the universe (bli ayin hara pu pu pu), and it’s all because of hitbodedut.

My motto for the few years when I was really good about hitbodedut was “The Aibishter Delivers”. G-d was my best friend who I could talk to any time and ask anything of.  If I was pissed at G-d, I’d tell Him. I’d say, “What?! Am I the butt of your jokes???” I talked to G-d the way I talked to people, which is crass but sharp, except when I am exhausted or depressed and then I sound like someone on Demerol with a 50 I.Q. If other people heard how I talked to G-d at the height of my reliance on hitbodedut, they’d probably kick me out for heresy. Except here’s the thing: You don’t talk to G-d like that if you don’t believe in Him/Her. Just the opposite.

As of late, like for the five years I’ve lived in New York City, my hitbodedut practice has gone down the tubes. As I like to say, “Jerusalem is full color and New York is black and white.” I feel a lot less spiritually alive here, which is nobody’s fault but mine. I can’t blame the klipas of unrestrained commerce and religious communities that resemble college campuses if college campuses were populated by apathetic mafiosi. I can only blame myself for not connecting to G-d because who else’s responsibility is it?

When am I going to just open my mouth and talk to G-d? It’s so simple: The jaw and tongue move, air passes over the larynx, and out comes sound. I do it all day. “I’d like an extra large Americano and a custard donut with chocolate frosting,” I might say. Or “What an asshole!” I might say. Why can’t I open up my mouth and have something useful come out of it?

It’s not to say that the only useful conversation is with G-d, but if I spent more time talking to G-d and less time commenting on what sucks in the world, my life would look different. I am sure, more sure than sure, that things I want to do that I feel like I just can’t do, I’d be able to do them. And I’d be functioning from a place of faith and trust instead of my current state of being jaded and passionless.

OK, I’m going to say something to G-d right now: G-d, imma talk to you today even if it is one sentence. Cuz I didn’t choose this life because I like not being able to go dancing and having to wear stupid socks in the summertime. I chose this because of G-d, and for the love of everything Good and Holy I need to get back to that place.