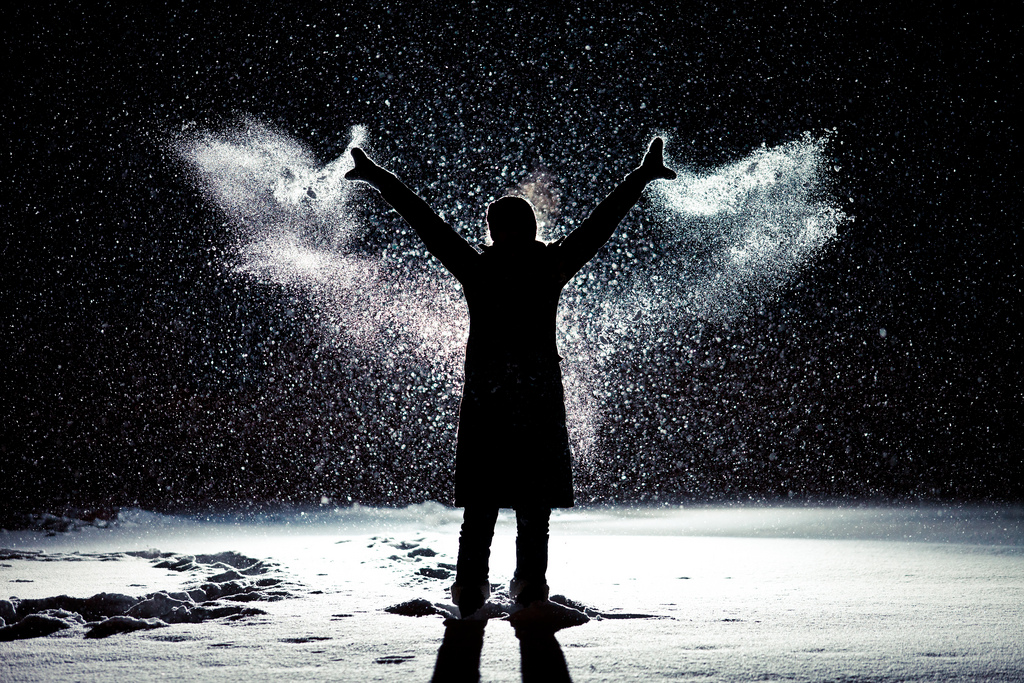 The Kabbalah Of Snow

When it comes to weather, I’m as Southern California as they come. I’m 3rd generation Los Angeles and my bones have zero reference point for extreme cold. I don’t do snowy winters very well.

Since our move to the Golan Heights, I’ve had no choice but to brush up on my winter-know-how. As much as I detest being cold, I’ve discovered that the presence of snow positively woos me. It’s the quietest, most beautiful, otherworldly (but still intensely physical phenomenon) I’ve ever experienced.

As long as I’m safe and warm enough to behave, I contest that the presence of snow is a downright spiritual event.

I took a deeper look into the mystical roots of snow to see if there was any Kabbalistic muscle to back up that idea.

Here’s what I’ve learned so far:

Whenever we run a physical phenomenon through the lens of Jewish mysticism – everything gets flipped on its head. There is no such thing as just a physical thing without a spiritual counterpart hiding somewhere offstage.  The mystics don’t approach anything in this physical universe without a search for its spiritual twin. Like a smile or a blush reveals otherwise hidden emotion, nature is a manifestation of divine energy flowing down from worlds beyond.

In other words: Nature gives us clues about what heaven is all about. Snow is one such clue.

Chassidut explains that water, in all forms, is a symbol of divine knowledge. Anytime water flows from a higher point to a lower point it is, in essence, a physical representation of G-dly wisdom broadcasting from a higher to a lower plane. The same way that knowledge flows from teacher to student or from parent to child (and vice versa), G-d transmits His wisdom to us. Flowing water is His way of showing us what that transfer looks like.

If G-d were to allow all of His “water,” to flow continuously, we would drown. Like way back at Mt. Sinai when G-d started to speak the commandments, and we passed out; remember that? We couldn’t take it; our pipes weren’t built to handle that kind of pressure.  So, He tweaked His delivery and made it flow through different paths and in different forms so that we could actually get some of that wisdom and keep it without passing out.

That’s one reason that water takes so many different forms: rain, ice, hail, sleet, snow… lots of different ways to teach, to learn and to connect. (For more on this [1]).

The Kishkes of Snow:

Science Alert! Snow is the halfway point between fluid water and solid ice. A snowflake needs at least two things in order to form…cold air, water droplets and a nucleus. A nucleus is made up of dust, pollen, minerals or other microscopic particles in the air.  Snowflakes form when extremely cold water freezes around the particles and turns it into ice crystals. [2]

Of the four elements of nature: air, fire, water and earth,[3] snow contains two. The particles are of the earth; dry, receptive, awaiting the knowledge of G-d in a spiritual sense. The droplets are that G-dly knowledge. So, Kabbalistically speaking, snow is equal parts heaven and earth; both knowledge and the vessel to contain it; a crisp and pure bridge between the world of matter and spirit.

The Zohar teaches that snow is related to the mystical sphere of “Keter,” the highest and most transcendent of all the divine manifestations; Heaven’s crown jewel. That’s where snow comes from. This knowledge pleases me to no-end, because that’s where it feels like it comes from. It looks like purity incarnate. And guess what? The prophet Isiah says so too, ”Though your sins are as crimson…they shall whiten as snow.”

Snow is made up of massive amounts of individual snowflakes that are each, (molecularly speaking) totally unique. It’s really kind of mind-blowing if you stop and think about it. A jillion tiny, unique pieces cluster together to create the singular experience we call “snow.”

For me, this is nature preaching unity. True unity is about a coming together of things that are different, not the same. When snow falls strong, it blankets everything – erasing all the shmutz of the ground – equalizing entire landscapes, with vibrant, white-winter-wonder. It doesn’t matter how much you’ve done to deserve it – when snow falls hard in your part of the world, you’ve got it just as much as your neighbor. It is a great equalizer.

I realize that some of you might very well be shaking your fleece covered heads in exasperation over this romantic weather analysis; I’m afforded a generous view on snow because we get so little of it. I suppose even crown jewels lose their luster when they fall by the buckets full for months on end.

If you are in a snow-kissed part of the world, you might consider taking the Kabbalists out for a whirl. Because chances are that at least once this winter, you’ll find yourself staring out your window in quiet wonder at blankets of pure, white snow. It’s entirely possible that a tiny notion may stir within you, a feeling, however fleeting, that something beyond temperature levels and atmospheric pressure is going down outside.

Just so you know… you’re right.

If any of you well-seasoned snow birds have anything (mystical or otherwise) to add, consider the comment section below your snow angle and flap away.

[1] This entire post was inspired by a brilliant class my mother gave in Rockaway, NJ. She lead me to Simon Jacobson’s “Spiritual Meaning of Snow” @MeaningfulLifeCenter -which was source material for much of the above.