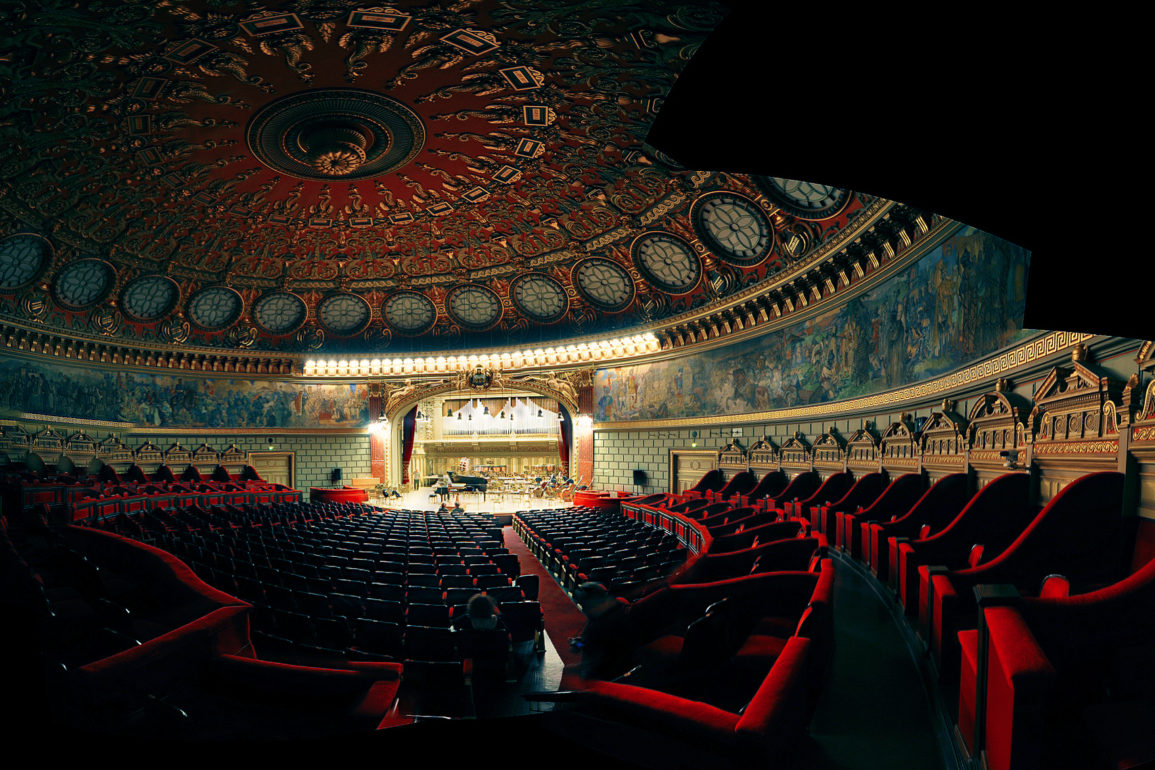 All The Futures We Left Behind

The people who know things about relationships say that it’s important to go on regular dates with your spouse, even as often as once a week. This is especially important during the frenetic phase of life that is raising (wrangling?) small children, when it’s all too easy for a couple to drift apart, buried underneath the incessant to-dos that come with parenthood.

There should be a disclaimer, though, that date nights probably should not involve any activity that is so emotionally loaded that one of the partners ends up sobbing quietly, or, not so quietly, during the car ride home.

I’m getting ahead of myself. Let’s start with this:

Cleveland may not be the most aesthetically pleasing city, with husks of abandoned factories lining some major midtown streets. The windows aren’t even all boarded up, as if the shoulders of urban blight are shrugging at those of us driving by.

Something Cleveland does have, though, is a tradition of excellence in classical music stretching at least as far back as 1918, when the Cleveland Orchestra was founded. As music majors, we uttered the name “Cleveland” with reverence. It is one of the Big Five, a modest Midwestern representative nestled among the giants of New York, Boston, Chicago, and Philadelphia.

One of the benefits of living in a city which is home to an excellent and venerated orchestra is that there is a lot of trickle-down of musical talent and support. For example, there is a professional-grade chamber orchestra in town, CityMusic Cleveland, that performs for free in different venues around Northeast Ohio. Their mission is to provide high-quality classical music to all the community members of Cleveland, not just those who can afford a seat in Severance Hall.

CityMusic Cleveland believes that music is good for the soul, and that what’s good for the soul is good for the city. I happen to agree with that philosophy. I also like free concerts. This is how my husband and I ended up sitting in the auditorium of a local synagogue one recent evening, surrounded by fellow patrons of the (free) arts.

My husband does not have the extensive musical background that I have, but he does enjoy classical music, and, perhaps more importantly, he loves me and wants me to be happy. This is, ironically, exactly why we shouldn’t have attended this concert together.

He is able to sit in the spring-filled velvet-covered theater seats, flipping through the pages of the program, listening to the sounds of the musicians warming up their instruments, and he is not suddenly filled with an unbearable combination of nostalgia and grief. He is, until recently, oblivious to the fact that that is what I, his wife, who he wants to make happy, am feeling.

It is all so familiar to me, the movements of the musicians on stage. The arrangement of the chairs, the strings seated closest to the audience, sometimes with the first and second violins next to each other, or sometimes, as at this concert, arranged so they are facing each other, the violas and cellos cradled in between. My vantage point as a clarinetist was always from farther back on the stage, behind the strings. Behind the strings, the flutes and oboes, next to the bassoons. That was where I sat.

It was far enough back that I could read a novel, or the newspaper, during long rehearsals where the string sections would work over and over and over again on difficult passages. During college I finished many novels this way, including Heller’s Catch-22, Orwell’s 1984, and Eggers’ A Heartbreaking Work of Staggering Genius. Our orchestra’s string section needed lots of practice time.

It’s an incredible feeling, sitting in an orchestra with forty or one hundred other musicians, all working toward the same goal, all playing our individual parts, counting out our individual rests, adjusting for the quirks of our individual instruments, this note needs to be lower, that one higher, that one louder, this one softer.

There’s an energy that comes with it, with the collective talent and ambition and heart of the musicians. The love and hate and passion spills out of the music and into interpersonal relationships between the musicians, the conductor, with anyone who finds themselves within the orbit of the ensemble.

Back at the concert, as member of the audience, I sat in my spring-filled velvet-covered theater seat, listening to the sounds of the musicians warming up and I am overwhelmed. The dreams of the past do not always fade quickly, and even though over a decade has passed since I didn’t get into graduate school, there is an ember that still burns within me for the possibility of professional orchestral playing.

There are always, always Friday night and Saturday night concerts.

When I go to the Cleveland Orchestra concerts I don’t feel it so acutely, that burning of desire and the pang of inaccessibility, because I know that even if I hadn’t become frum, even if I had practiced 18 hours a day, I still never would’ve been in an orchestra of that caliber.

But this chamber orchestra, the one my husband and I were watching, this was something I could see myself perhaps doing. This was something that might have been attainable, in another life. And that was incredibly painful.

Because as much as I treasure my life with its countless blessings, I miss orchestral playing. I miss it so much. I’ve played with a wide variety of different ensembles over the years. Basically, I’ve played with anyone who’ll let me. Playing music is more than just a hobby, or a mode of relaxation for me. It is an extension of who I am. It is a fundamental expression of my neshama.

But orchestral playing is hard to come by. There are typically only two clarinets in an orchestra (some composers like an expanded clarinet section, but the standard is two), and so the slots fill up quickly and they don’t become vacant very often. Add Shabbos observance to that already difficult situation and it becomes nearly impossible to find a seat.

And so, as my husband sat innocently by my side, listening to the sweet melodies of Tchaikovsky and the amiable harmonies of early Beethoven, I was frantically engaged in self-talk about the benefits of being religiously observant.

Being confronted with this orchestra, a seemingly attainable potential future, it seemed like the only thing preventing that from being a part of my life was Jewish observance, something I had taken on in my early twenties, when my life was in such flux, such a state of disarray. Was it truly worth the sacrifice? Could I say that with 100% certainty? Was my life really, really better this way? Had I really made the correct choice?

I let myself think about what it would be like to have a different life, a life where I didn’t keep Shabbos. Where I was the one sitting on the stage. Traveling to different venues, playing the same piece for different audiences, with different guest artists. Maybe even being a guest artist myself.

I can’t say it wasn’t a pleasant daydream.

But memory and imagination are funny things. When I am feeling overwhelmed by nostalgia, I conveniently recall the positive memories, the euphoric parts of that phase of my life. I don’t reflect on the monotony, or the backstabbing, or the egotism, the competitiveness, the absence of balance. I don’t reflect on the politics and griping and boredom and interpersonal complications that come with any job.

My relationship with the present is also complicated. I have a tendency to focus on the negative, on what’s missing, on what’s not going well, or, at least, not going the way I want it to. I don’t think about the tremendous bracha of Shabbos, of my family, of the immense personal growth I’ve experienced in the past decade or so because of the Torah I’ve learned. It’s not inconsequential, but I very much take it for granted.

Still, there is that small voice in my mind that says things like “Oh, you would have gotten balanced and developed good middos as you matured, you didn’t really need Torah for that! You were just a train wreck because you were in your early twenties! It would have worked itself out. You could be filling that lack your neshama feels right now, that itch to play classically, and you would’ve been just fine in your personal life.”

I used to feel panic at that voice. That it meant that I didn’t believe enough. That the simplicity of following the truth was more complicated than I had initially thought and now I was so deeply enmeshed in this lifestyle so what choice did I have at this point? And that is a terrifying thought, the thought of sticking with a choice because of inertia. Was that really what I was doing? What did this voice mean for me?

Now I understand that it is simply the voice of the futures that will not be. And that is a voice we all have, for with every decision we make, every path we go down, there are paths we do not choose and possibilities that become closed to us. And that is okay. That is part of life.

We could sit around and “what if” forever about the way things could have turned out, had we chosen differently. And that desire becomes stronger for me when I’m feeling down or stuck in a negative thinking rut.

It is when I remember to shine the light on the things that are a bracha in my life that I feel okay with those “what ifs.” I am content when I remember to put my religious ideas into practice, the ones of being satisfied with my portion, with focusing on the good, with being grateful, striving for balance, and tapping into this wellspring of mesorah that nearly always brings me back to a centered place.

When I choose to connect to the religion that moved me enough to change my whole life around I see that my choice is still relevant. My relationship with Judaism may be more complex than it was ten years ago, but that is to be expected in any relationship in which there is growth.

It’s not that I’m never going to question my decisions, or feel frustration at sacrifices I’ve made. It’s not that my life is going to be without pain or struggle because I continue to choose to believe. And I’m certainly not going to stop dreaming or striving for the future even as I work toward being content with the present.

Instead, it’s knowing that even though I rode home from that concert in tears, I still would make the same choice again. That the sacrifice is really a blessing, and the pain is balanced by the joy. And that that is life. Pain and joy, sacrifice and blessing, all together.

A little over a week after that experience and re-affirmation of my belief, I got an email from my clarinet teacher. There may be an opening for a clarinetist in one of the local community orchestras. And they don’t play on Shabbos.

I don’t know if it will work out; I still have to be in touch with them and audition for the spot. But regardless of the outcome, it feels like a kiss from Hashem. A beam of sunlight from heaven especially for my little musical neshama.