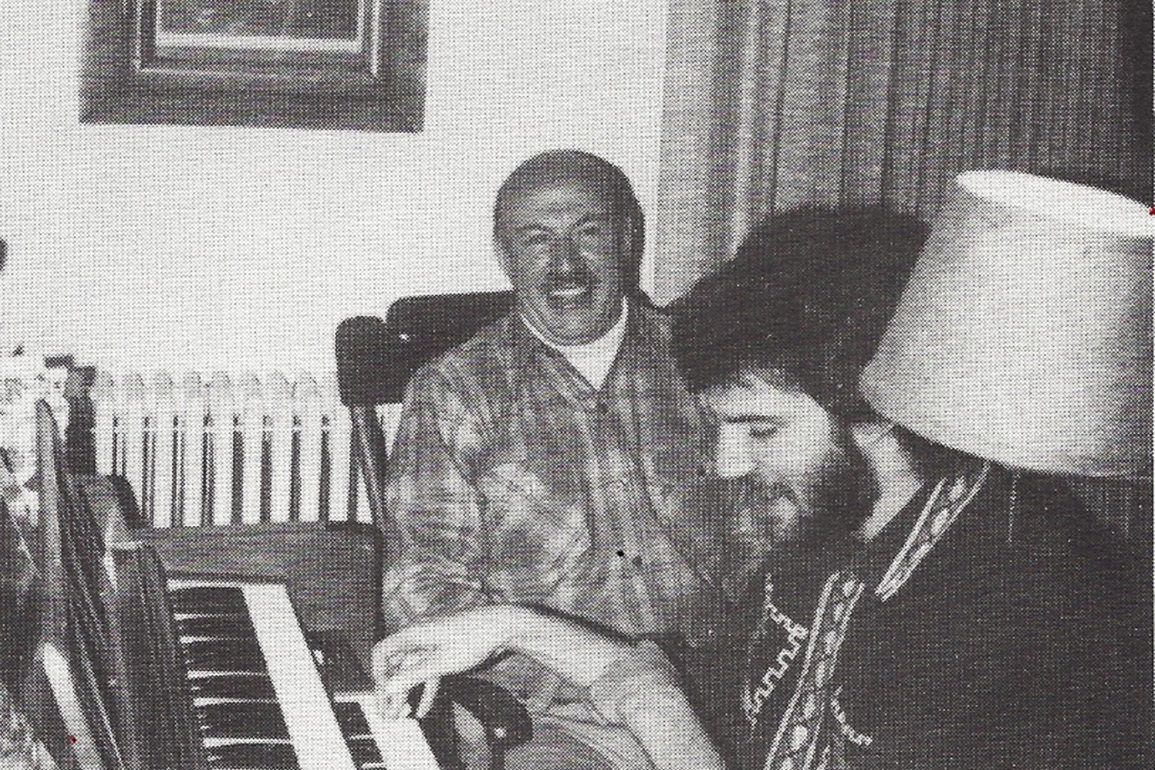 I Carry My Father In My Blood

The lakes and ponds have swelled with the recent rains and the air is redolent with the warring scents of ripening crabapples and blue-green algae. Tonight, my parents will take my brother Paul, my sisters, Nina and Susie and me to a drive-in movie. We will ride in the Ford pick-up my dad brought home last week. We will climb into the bed of the truck, which he has covered in sleeping bags, and in the languid heat of a mid-summer Minnesota evening the truck will begin to roll. Out on open road we will lie on our backs and watch the stars slowly appear as a reluctant sun gathers itself behind the low rolling hills west of Lake Minnetonka.

The movie will have already begun by the time we arrive, and when my dad finally makes his way back to the truck with the popcorn and the Hire’s root beer, my siblings and I will be fast asleep. I will wake up the next morning in my own bed, staring into faint swirls of dust inside a beam of clear sunlight. I will have no memory of having been tucked into my bed the night before.

My dad is lying in a bed across town at Mount Sinai hospital struggling through the final stages of lymphoma and I’m in our den watching Tom Petty on MTV. Suddenly, and for no apparent reason, my attention is drawn to the round glass light fixture that’s been suspended over our dining room table for the last fifteen years. As I turn to look, the light falls, breaking into thousands of tiny pieces.

That same night I have dream, a nightmare really, that my dad is having a heart attack as I hold him in my arms. He’s in pain and he’s crying, wetting my chest with his tears. I call out for help.I wake up breathless, my own heart near exploding.

In the morning I go to visit my dad in the hospital. He’s begun another round of chemotherapy. Minutes after I arrive, he grabs for my hand. “Pete,” he says, “I’m so afraid!”  I take him in my arms and he begins to shake. He howls in pain. His tears are soaking my t-shirt and his thin frame shudders in my grasp. He clutches at his chest and I can hear myself screaming, “God dammit! My father is dying. Somebody help! Somebody help me!”

The nurses come running. I stand back, watching as they work. But my mind is elsewhere. I can’t stop thinking about that light fixture. Out of nowhere, it just fell. Broken, into thousands of tiny pieces.

It’s only a few months before my Bar Mitzvah. My dad and I are paddling a canoe on Cedar Lake. He is an Eagle Scout and as such, he is in the stern controlling the direction of our boat. I am in the bow doing my utmost to provide the forward momentum. To the west of us are the homes of some of Minneapolis’s wealthiest denizens. To the north, nearer to the noise of the freeway, is the purported nude beach. Every kid older than nine has heard about this fantastical place where you can get a look at a real pair of breasts although no one I know has, since their days as nursing infants, actually seen one—there or any where else for that matter.

To the east, toward downtown, are the rough gravel beaches, strewn with garbage and overgrown with thistles. This is the part of Cedar Lake where ‘hard partying Indians’ come to have a little fun, and at least for an afternoon, to reoccupy a little of the land that was stolen from them.

I hear the dip and swish of our paddles as we approach the center of the lake and then, the sound of men yelling from far away. Suddenly, a shirtless, muscular man, dives into the water and backstrokes out to our canoe. The men on the beach crane their necks to look, all of them pointing at us and laughing. When the muscular man reaches our canoe, he grabs it and rocks it back and forth, trying to tip us over and into the lake. I’m terrified but my dad just laughs and gives him a solid whack between the shoulders with the broad blade of his paddle, hard enough to matter, but good-natured enough to show absolutely no fear.

The men on the beach double over with laughter at this. One of their own being humiliated by two Jews in a fiberglass replica of their native watercraft is too much to take. As the muscular man swims shamefaced back to shore, I know my dad will quickly steer us to another beach and out of harm’s way. Instead, he yells, “Who’s next?”

Now we paddle toward the men assembled on the narrow beach, thirty or forty of them in all. When we reach the shore several of them rush to drag our canoe up onto the sand. An older guy in a Ritchie Blackmore tour jacket offers me a can of Diet Rite and my dad, a swig of Ripple wine from a communal bottle.

My dad and the men speak for an hour or more about adult things like subsidies, foods stamps, and local politics. With their voices droning behind me I busy myself at the edge of the water with the construction of tiny fort of twigs, and by trapping minnows behind a seawall of small stones. And then, as the sun begins to lower itself behind a canopy of basswood trees, the men help us cast our canoe back into the lake. They wave good-bye and wish us well as we paddle out toward our car.

It’s early evening now and the loons can be heard above the steady drone of the dragonflies. From the north, I can hear the distant roar of the Burlington Northern line, which passes by here each day near dusk.

My dad had some secrets, or at least he wanted me to believe he did. Some of them he’d tell us, and some were just… secrets. He said for example, that he knew a certain guy on the Northside, a ditch digger who could ‘make problems go away.’ This ditch digger was alleged to have been an associate of Kid Kahn, the much-feared (and also, much beloved) Romanian Jew, who aside from being part of the Minnesota-based Jewish Mafia was also the largest charitable contributor to the Romanian Synagogue. Sometimes, when I least expected it, my dad’s secrets would reveal themselves as something other than just bullshit stories.

My sister Nina is on the phone again with Marvin Adelman, the diminutive and highly successful Minneapolis real estate developer. Nina has a habit of bouncing on her bed when she’s on the phone. If she’s nervous or excited the bouncing becomes a compulsive ritual that shakes the entire back half of our small house. Marvin is twenty-five and he drives a garish purple corvette. My sister is barely seventeen and to her, Marvin seems terrifically sophisticated. Tonight the bouncing is especially energetic because today Marvin has asked Nina to come with him to Las Vegas. In spite of her excitement, the next morning she’s bawling at the breakfast table, and she screams at my dad, “I don’t care what you say, I’m going and you can’t stop me!”

“There’s no way you’re going tramping off to Vegas with that little schzlub!” my dad yells as he grabs the newspaper and storms into the bathroom.

Two days later Nina emerges from her bedroom crying as before, but this time it’s because Marvin has called to tell her that he never wants to see her again.

Twelve years have passed. It’s November 1983. We’re sitting Shiva for my father. After all but our immediate family clears out, the doorbell rings. Standing in the doorway is a very tall person, maybe six five. He introduces himself as Larry. Along with a thickly muscled neck and massive shoulders Larry has gorgeous blond hair, long red fingernails, and large pendulous breasts. He’s sobbing and not knowing what else to do, we just watch.  At last he regains his composure and begins to tell us how devastated he is that my dad has died.

Apropos of nothing it seems, Larry tells us that he once served time for killing a man. “Self defense,” he says. “Your father was the only one who’d give me work after I got outta jail. The only one who didn’t see me as some kinda animal.” Larry wipes the tears from his face with the back of his large hand. “Last time I saw your dad was almost thirteen years ago. He told me he needed me to pay a visit to some guy named Adelman. I didn’t know what to expect, so I brought along my crow bar.”

It’s Thanksgiving eve and the snow is deep. It muffles sound like a thick wool blanket. A hard wind moves the branches of the blue spruce trees out near the street. Inside my brother’s house, the table is set. There’s a foldout tissue paper and cardboard Pilgrim on the counter, cranberries in a crystal bowl. My brother carves the turkey but no one’s hungry. Not one of us speaks. We avoid looking at the phone as if by doing so we could prevent it from ringing. It doesn’t work of course. “Thank you for calling,” my brother says quietly to someone on the other end.

At a stoplight on Minnetonka Boulevard the falling snow takes on the colors of the lights. I watch one snowflake in particular. Watch it drop and swing up with the wind over the branch of an enormous elm. I can’t remember ever breathing so slowly or having time act so unreliably. Each moment seems to stretch. At this rate the drive to Mount Sinai hospital will take months or years. What the doctor says when we arrive makes no sense.

My family doesn’t just cry. They purge themselves. They shudder and close their eyes. They wail and they dance about. They make the hoarse sounds of beasts.

For the longest time, I just watch. I’ve always wanted to see something completely new. This is it I think, and it’s nothing I could have imagined. Not the look of it. Not the heat of it. Not the sound of it.

For the longest time, I just watch.