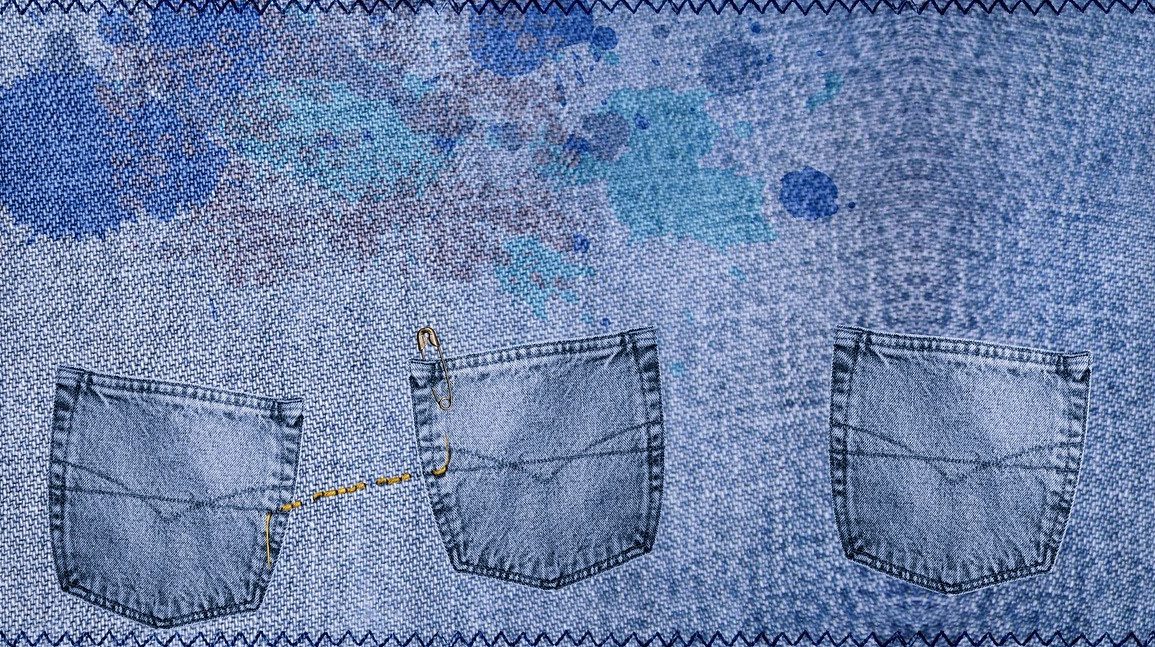 The Jewishness Of Pockets

When I was a little girl, my mother shielded me from the drab life in the former Soviet Union with hugs, stories and her old Zinger sewing machine. I always had pretty dresses that made me feel comfortable.  And loved.

Through a miracle, we came to this country. Mom’s hugs and stories were essential, but there was no need for a sewing machine anymore. Pretty dresses were available, inexpensive and ready-made. Except, I definitely preferred pants. Especially pants made for men. Have you reached into those pockets? Deep, roomy. The well-kept secret of male dominance.

Those luxurious trouser pockets easily fit essential peripherals – phone, wallet, keys, so that the wearer of pants is quick, organized and effective, while the purse-toting female is doomed to ineffectually fumble in her purse while tottering on high heels. But men’s pants, pockets and all, don’t look so great on women. So, I channeled my feminist leanings into sewing comfy pockets onto every garment I own. Now that I don’t spend energy on fumbling, there’s room for other hobbies.

Like reading Talmud. I don’t really study it in the traditional sense, sleeves rolled up, beads of perspiration on brow and voice strained from arguing. Nor do I use it to guide my life. I read it quietly and respectfully, as the amazing artifact of Jewish history that it is. Ah, the things it tells me about life in those long-gone times! The sacred and the mundane.

For example, tefillin. A sacred object. It probably looked then pretty much like it looks now – leather straps and parchment scrolls. But, oy, the problems it brought about.

You are wearing your tefillin and need to go to the bathroom. Not simple at all. Requires serious strategic planning. Let us look at Berachot 23a and 23b.

You are supposed to take off your tefillin when you are 4 cubits (6 feet) away from the bathroom. Fine. Done. But what do you do with them? You could just leave them in your home. Not that simple. According to Talmud, you would place the phylacteries in the holes adjacent to the bathroom. But then – mice would come and take them or gnaw upon them. Not good. To fix the problem the rabbis ruled that you should place your tefillin in the holes adjacent to the street, where there were no mice. Did not turn out so great either – a passersby could steal them.

Once it turned into a tragedy: a student left his tefillin in a hole adjacent to the street and a prostitute took them. Later she came to the study hall and said, “See what so-and-so gave me as my payment!” When the student heard this, he ascended to the rooftop, fell and died.

Ultimately, it was decided that you need to take your tefillin into the bathroom with you. Fine. But what do you do with tefillin while in the bathroom?  You wrap them in your garment, so that unclean substances do not contaminate it. But that has its own dangers. What if your tefillin fall out into the bathroom filth? And even if that does not happen, won’t you be distracted from your prayers by fear of it happening? So, the ultimate solution – you hold your tefillin, folded in your clothes, in your hand while in the bathroom. Which of course raises questions of a one-handed operation. But this problem is not addressed. We are Jews, after all, and why should we be comfortable?

What do we learn from this discussion? Jewish life in the times of the writing of Talmud was harsh. Homes were overrun with mice and did not have much furniture – otherwise why would you need to put sacred objects into holes or hold them in your hand? Clothes had no pockets. But there were students and study halls. And rabbis who were diligently trying to help Jews lift themselves, at least in spirit, out of the brutish indignities of everyday life.

I gulp down my 21st century squeamishness and let my heart overflow with tenderness and admiration for the people of Talmud valiantly striving for the clean and the holy, for the young. I want to go back in time and give them… hugs? Probably not kosher and definitely not helpful. So maybe I can just sew them some pockets?  So that they feel a bit more comfortable. And loved.