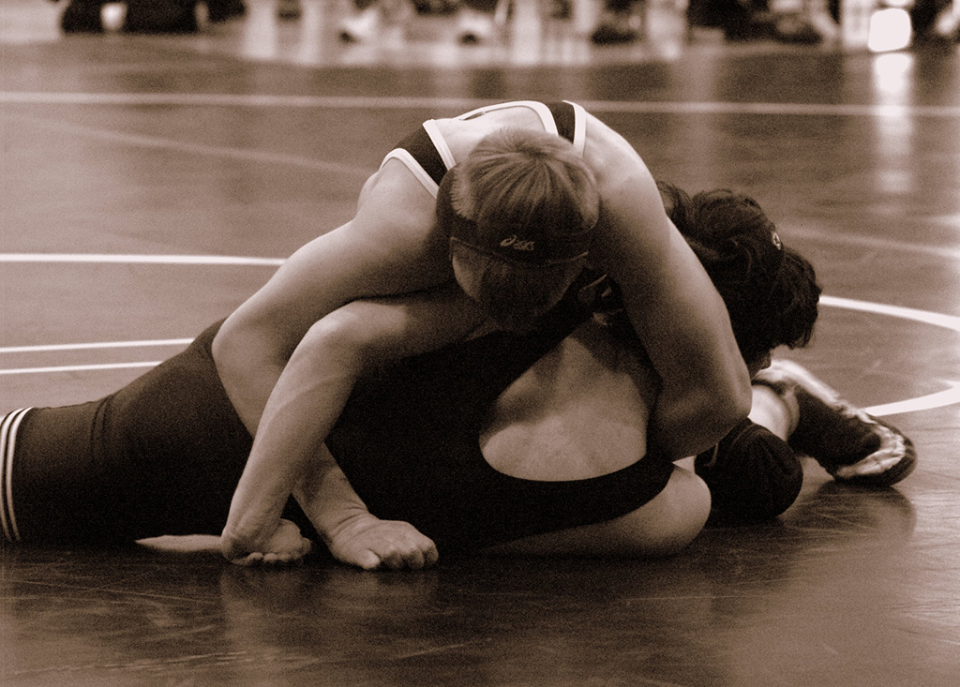 In Which I Discover I’m A Wrestler, Too

There is a space in our parental minds, an attic where we lock up what we fear most for our children. It’s where we stash natural disaster, terrorism, horrible illness, and real-life bogeymen, together with the golems and shaydim of our imagination. We have to. If we didn’t, we would never let our offspring leave the house.

Over time, we add other things – pain and inconveniences big and small – simply because we have nowhere else to store them. Poison ivy. Heartbreak. Tonsillectomies. Loss. One afternoon, when our youngest son is in middle school and asks if he can join the team, we move wrestling in there as well.

Wrestling has never been on our radar. Its mention barges in like a violent athletic nonsequitur that startles us with images of one human being slamming another to the floor. It’s not that we bubble wrap our boys before sending them out into the world. Our older two play combinations of soccer, hockey, baseball, and basketball, and the third has done karate since he was small. You should see their dossiers at the orthopedist.

Yet soon after wrestling takes its outsized place in the hierarchy of that sealed storage unit in our minds, it begins to seep out, refusing to give us peace. We have always allowed the boys to make their own athletic choices, but here we let our fear and opposition be known. Our youngest keeps asking, but we stand by our no four autumns in a row – until now, when he, with a magic sleight of hand, succeeds in pulling the permission slip with our names on it out of a hat.

We pinch ourselves as we write a check to the Yeshiva Wrestling Association for the purchase of protective gear, special shoes, and a uniform. I am equally overcome with Jewish pride that such an organization exists and terrified that my son is a part of it.

My husband shakes his head in disbelief that we have agreed to this, to the violence of a sport developed by the ancient Greeks to train soldiers in hand-to-hand combat. I begin to repeat the refrain Pin him to the mat over and over, twisting a phrase signifying victory until it becomes a curious prayer as familiar to me as the morning blessings, words I hope will protect this child I birthed into the world from shattering a limb into a thousand tiny pieces or scattering his teeth all over the gym floor.

My son asks me to come watch him, and of course, I agree, my reservations notwithstanding. A friend, the mother of two boys who have been wrestling for years, suggests I bring along something to crochet. She says I’ll want to keep my nervous hands busy. I cannot believe how many of us make this leap of faith.

While I cover my ears to block out the sound a body makes when it thuds to the mat, my son enthuses about being on the team. He relishes the camaraderie and competition, feels lean and strong from the intense workouts, learns the rules, and longs to win. He starts shedding his old skin, emerging as a more confident, anchored, peaceful version of himself. At night, he texts me from his bed, reminding me that he has practice the next day and that he’ll need a high-protein dinner when he gets home.

I turn in, too. I lie down thinking about wrestling and wake up thinking about wrestling. I have never been a restful sleeper, but in the early morning, I notice the linens are in a state of total disarray – the blankets entwined with the sheets, the covers in a heap on the floor. I wonder what questions I have wrestled with in my dreams, and whether I have asked them of G-d or Man.

In search of answers, I make the bed and drink my coffee with my chumash open in front of me, while Yaakov, our patriarch the wrestler, walks between the lines on the pages. I watch him cross a stream, where I see a man, an angel of G-d, approach him in the star-filled night. When the two begin to wrestle, I resume work on the oversized afghan I’ve been crocheting to keep my hands busy.

Behind me, the sun comes up in the kitchen window, casting its blue-gold light through the limbs of the maple tree in the yard. Yellow leaves, so brittle they crumble at the slightest touch, cling to the branches, unwilling to embrace the change of seasons. Something rustles in the grass – a squirrel, maybe – sending the birds off in different directions. My coffee grows cold.

The man-angel-of-G-d sees the same dawn approaching, the same blue and gold falling like glitter on the water of the Jabbok streaming past him. He knows he cannot win, that he will not succeed in pinning Yaakov to the mat. I make the mistake then of looking up from my stitching, and I cannot avert my eyes before the blow comes – to Yaakov’s hip, disabling him for life. As a mother, I feel the painful strike in my heart, but I also see the grace in what comes next. A limping Yaakov, in exchange for a blessing, lets his opponent depart in peace.

When Yaakov learns that his new name, Israel, signifies he has wrestled with G-d and men and prevailed, it dawns on me that we are wrestlers in a way, too – we, the Children of Israel, Yaakov’s sons and daughters.

Haven’t we all, at one time or another in our lives, felt G-d pin us to the mat?

As children, have we not sought our parents’ blessing in the wake of a quarrel?

As parents, have we not battled, but given the blessing anyway, letting our children go off to become who they are destined to be?

The poet Louisa Bevington writes, “Our oneness is the wrestlers’, fierce and close.” To rise each morning is a leap of faith. We risk injury to our hearts, and yet we cleave to one another in order to breathe, to bear the unknowns the Master of the Universe has laid out for us in staggered increments of time. Each day we may wrestle with G-d and men, but we learn from the very beginning that to prevail is to find meaning in our proximity to both, even when our paths diverge.

For it is in wrestling with our fears and desires, our wounds and vulnerabilities that our humanity is laid bare.

And it is while we are down on the mat, our hearts fully exposed, that we open ourselves to the fiercest love.