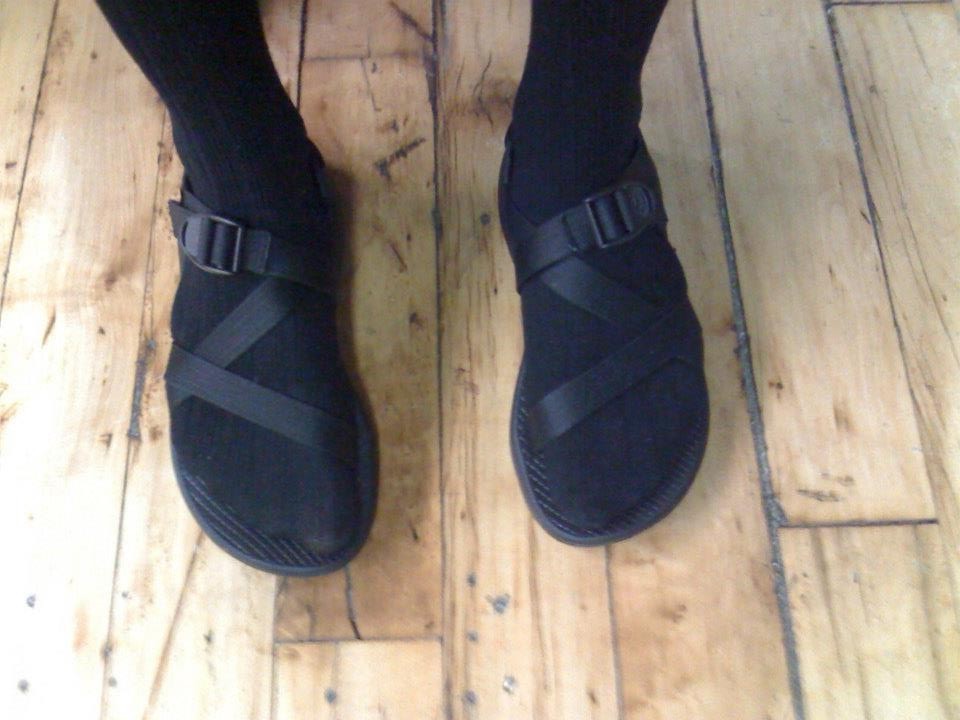 The Story of My Stupid Socks

This is the story of my stupid socks, and it is also a little quip about how to ask a she’elah (when you ask a Rav for a psak, a Jewish law decision). It is a story about letting myself and other people off the hook as much as it is a story about harnessing up under the yoke of Heaven. It’s a story about hosiery and one fateful phone call.

The story begins three years ago, when I was ticked off. I was ticked off every morning when I walked to the subway because I was wearing opaque socks or tights and other women were not. I was being judgmental. I was having a pity party. They get to do whatever they want, and I have to wear these stupid socks. Nobody made me wear the socks. I thought it was the right thing to do.

Now the pity party was fueled, to some extent, by debates I was having with my friends. Numerous friends claimed that sheer stockings were 100% acceptable as leg/foot coverings. They claimed that they learned it in seminary, and that even the most chashuvah rebbetzins in the whole dang neighborhood wore sheer stockings. It was the heaviest peer pressure ever. I mean, women who are a lot more frum than I am wear sheer stockings, and here I was wearing black tights or opaque knee socks. In the summer.

The only reason I doubted the veracity of the sheer stockings establishment was that I read in Rabbi Farkash’s sefer on the laws of Family Purity that sheer stockings are not considered to be an adequate leg/foot covering. I was like, “What gives?”

I had spoken about it with my mashpia. Me: “I hate my socks. Everyone wears sheer stockings or bare feet. I want to wear sandals and bare feet.” Her (paraphrased): “You made the choice to live this life and marry a chosid. Suck up and deal.”

I stewed in resentment of everyone around here who “got to” wear sheer stockings all summer.

After one particularly tense discussion about what Chabad actually permits in terms of hosiery, my husband called the Crown Heights Beis Din for me and asked the question. (I was embarrassed to call myself.) The way he worded the she’elah was general — not specific to me. Retrospectively, it was dumb for us to ask the question in a general way. By asking in a general way, we were setting them up to basically make a psak for the whole community, which they weren’t about to do. Making a psak like that has long reaching implications (and any decent Rav won’t make that kind of psak for a whole community off the cuff), so sof sof the Rav on duty opted out of answering the she’elah.

I stewed in my frustration for a couple more weeks until I finally got the courage to ask the she’elah myself to an out of town Lubavitch Rav. I chose someone who I thought would not have any political attachments to the issue. This particular Rav had given me “lenient” psakim many times before, so I figured I would be getting permission to lighten up my hosiery.

I said, “So let me rephrase the question. If someone wears sheer stockings, she is doing something wrong. Is that correct?”

Everyone has her own she’elah. What a Rav poskins for one person is not the same as what he’ll poskin for another person. Decisions in Jewish law have a lot to do with particular circumstances and the way the question was phrased. That’s why you can’t go by your friend’s she’elah — you have to ask your own. I called and basically said, “Hi, I want to go down a level.” If I had called and said, “Hi, I don’t cover my legs at all. Can I wear sheer stockings?”, I might have gotten a different answer.

I’ll tell you what I did get out of his psak: Peace of mind. As quickly as the Rav answered me, I let go of my resentment toward other women. Without the debate about “what Chabad actually does”, I’d see a lady on the street wearing bare legs and I’d say to myself, “She must have asked her own she’elah, and that’s the answer she got.” I’d see the skirts just to the knee with the sheer-stockinged knee sticking out, and I’d say to myself, “Everyone has her own she’elah.” Getting a clear, definitive answer for myself allowed me to lighten up. I got my answer; it doesn’t matter what anyone else does. She has her avodah; I have mine.

So that is the story of my stupid socks. I call them “stupid” because I still don’t like them. In the summertime, I wear long skirts with culotte slips and opaque knee socks under them because black tights are too uncomfortable. Duane Reade has the best black knee socks. They’re opaque but breathable and they stay up. I know. I am soooo glamorous. I buy my socks at the drug store and I wear old lady pantaloons. But, yo, I’m fully covered and relatively comfortable.

I manage this issue in a way that feels OK to me, even though I would prefer to wear my sandals barefoot or with sheer socks. I wouldn’t say it feels good, but it feels OK. What feels profoundly OK is not doubting myself, and leaving room for other people to do whatever they please without my feeling jealous or resentful.

The last thing I want to say is this:  I often feel somewhat bad because I feel like I don’t dress chic enough. I wear these sandals and socks (pictured above) unless it is freezing out. I am curmudgeon about owning and wearing small quantities of long-wearing, functional clothing instead of owning a big wardrobe because, primarily, I don’t have a lot of money to invest in fashion. I’m on my third summer of wearing these very sandals, and I hope to get at least three more summers out of them. Nevertheless, peer pressure to look hot exists in my world.

But then something totally weird happened: I have a free subscription to Vogue. I opened November’s Vogue only to find the pages full of “normcore” clothing. Everything was beige, brown, plaid, plain. And then: There was a fashion photo–not an ad but something actually chosen by Vogue editors–of a model wearing Prada imitations of Chaco sandals, the same Chacos I wear with socks every single day. People, Prada copied my style. All this goes to show the fickle nature of fashion, how it makes more sense to just wear whatever you can afford than to try to keep up with it. In the end, they are trying to keep up with us.