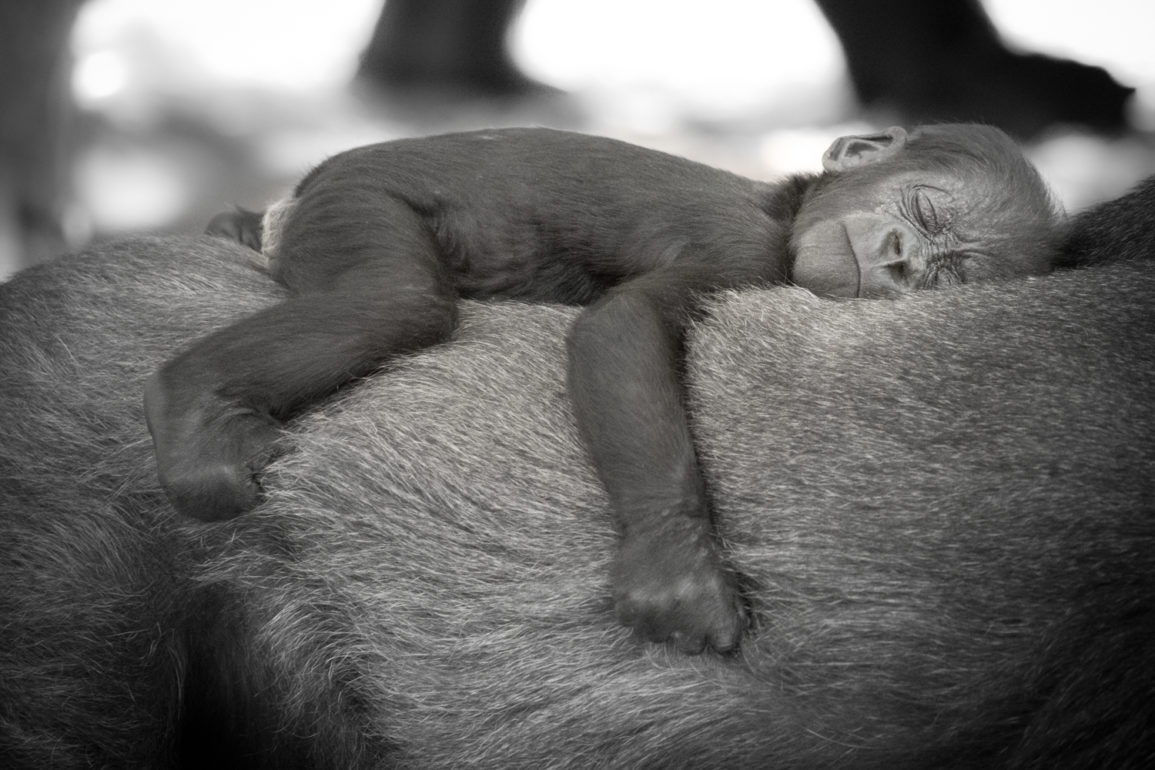 The other day I visited Sydney's Taronga zoo with my friend Mandy from The Arcanum. We spent the whole day taking many many photos, but this one was my favourite. This little baby was utterly adorable. He slept on his mum's back while she carried him around. At one point he started to slip off, but she used her big strong arms to give him a boost up. A quick shove of his bum later and he was back sleeping on her. He looks so cosy and comfortable - I'm quite jealous!
Chaya Kurtz·December 5, 2016·5 min read

On Putting Babies to Sleep

In my late 20’s, it was right before I left for Israel, I was in Cleveland doing a poetry reading at a friend’s poetry jamboree. He had a gallery space on street level connected to a basement studio where he lived. He had printing presses down there because he collects them. He moved away from Cleveland and has more printing presses now, as well as an entire archive of historical newspapers. He still lives with his printing presses, but now he also makes blank notebooks.

There were a lot of poets there that night, at least 20 as it was an all night thing. We all had our slots for reading our own sets. No sooner had I started reading than a car crashed into something outside the gallery. I heard a loud scream, which turned out to have been a loud yowl. This big dude runs out and then runs back in saying, “I’m a vet tech! I can do it!” He rips his T-shirt off, then rips it into bandages, and returns a moment later carrying a large pitbull with a busted paw. He bandages the paw of the pitbull, who is whining (understandably) while being remarkably well tended to. Then he takes the pitbull to the animal hospital. It all happened in less than five minutes. I then had to continue my poetry reading.

I was wearing a terrible dress that night. I got it at Rainbow (the store, not the gathering, though that might have been equally hideous). It was a long halter dress made of polyester in primary colors and black. I eventually put it in a free clothes pile in Jerusalem. That night I was also wearing my dead grandfather’s fake Fendi watch. It was unbelievably fake. Not regular fake, but so counterfeit that you could scratch away the gold-colored plating to reveal a purplish metal. I had on a huge pair of Tibetan silver earrings, and my hair was short. On my feet were probably sneakers. That’s where I was in life.

I don’t remember the specifics of that set, and I probably don’t have any of those poems any more, but I do remember what happened after I read. One of the poets was this jackass who had recently gotten custody of his four-year-old daughter, and he had brought her to the poetry jamboree. She was the requisite Bohemian kid, which was fun for the dad until she was overtired and wouldn’t go to sleep. She wouldn’t stay down in the studio, which made sense to anyone who cares about little children more than they care about themselves. She was alone down there, and the noise from upstairs in the gallery was intense, and she wanted her dad. Dad was being a poet, the douchebag kind who uses poetry to hit on girls but never writes anything good, and he had no interest in properly putting his child to sleep. He wanted to drink and party. So I decided to be the mom.

We went downstairs, and I tucked her into a couch in the least noisy corner of the studio. I made sure she had a lot of blankets and pillows. And then I sat there on the floor next to the couch and sang to her until she fell asleep. She was a sweet little child and I regretted that she was stuck with that dad, because she needed to be protected and nurtured. It was the best I could do. After brunch the next day, I swooped in on her like a falcon when the sleazy next door neighbor offered her a piece of candy. I guess a lousy father is better than no father, but you can’t let young children fend for themselves. They’re scared of everything and they’re tiny, and she needed attention far more than her father needed the cup of whiskey that he had in his paw all night. Shame it wasn’t his paw that got busted.

A couple years later I was on this illegal settlement for Shabbat. It was an outpost of Karnei Shomron. They didn’t have any glass in the windows in their shul, which was built of concrete. The plantlife up there was scraggly, except for this huge fig tree. The brush in the hills beyond the village was high. They had only recently gotten a water main. Before that, they had to bring water up in trucks.

I think only ten families lived up there, so there wasn’t a huge minyan that Friday night. There were enough men to make a minyan, and a few women and their babies. But since the shul had no glass in the windows, they were wide open so the smell of the brush came in. The brush, especially when the wind is blowing at sunset, is redolent of sage and hyssop.

Everyone had their guns because it was pikuach nefesh — necessary to save a life. But the babies were just babies, and all babies cry. Somebody handed me a crying baby. There wasn’t really a sense that I was a stranger. I took the baby and her mother thanked me, and I walked her around the women’s section of the shul. She stopped crying somewhere around shemona esrei. I think the best praying from a siddur I ever did was while holding that baby. I was standing in front of one of the open windows. If every shul could be like that one, I’d spend more time in synogogue.

At lunch the next day, the baby of an IDF commander and his gorgeous wife was fussy. I ate the rice they served me, and the tahini, and I offered to take the baby. She was maybe four months old. I took her out into their front walkway and sang to her quietly. She had been fed and diapered and was fussy in the way of overtired babies who are resisting sleep. Her mom was tired.

We walked and sang for a good forty-five minutes. She wasn’t my baby so I didn’t have that exhausted sense of urgency that I’ve had with my own baby — when you reach the point of whining, “Pleeeease just go to sleep.” I wasn’t married yet but I wanted to be. My maternal instinct was like a creek after snowmelt. Holding a baby and rocking her to sleep in my arms was the kind of love that makes you cry. I get that way with my son. I love him so much that it sometimes makes me tear up.

I went back into the meal with the sleeping baby, and her mom said, “Thank you.”

I look back on my weird career trajectory and I have a lot of regrets. I regret that I have not worked up to potential. It’s hard for me to rally the courage to write. I’m afraid of what I might say. But putting that baby to sleep, and calming my tiny boy when he’s exhausted at the end of the day — I’m not sure that writing a best-seller would be that heart-satisfying.

I want to write the best-seller, but I have to forgive myself for putting the baby ahead of it. At the moment I am leaning in — just to something way beyond the radius of my career.