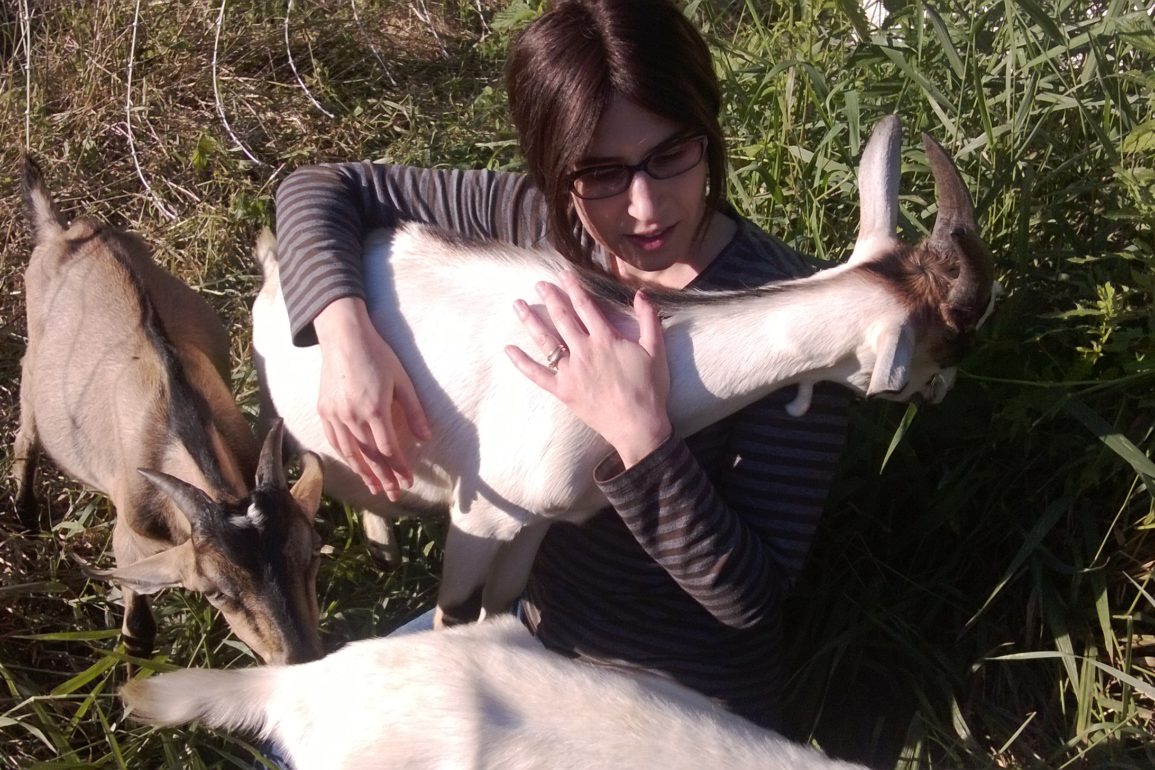 This piece is part of the series, “Readers Take Over Hevria”. The topic assigned to me:  “People who are on the most “Orthodox” end of Hevria’s religiosity spectrum (I guess I mean closer to Hareidi) to profile someone from a liberal movement whom they both love and admire, on a spiritual level…”. I’m going to talk about an educational program that I really, really like: Adamah.

I’m 17-years-old and it’s Shabbos night and I am walking through the woods at Camp Isabella Freedman out in the Connecticut Berkshires. There’s snow on the ground but it’s pretty packed down. I’m at the Nesiya Institute winter retreat (Nesiya Institute unfortunately no longer exists because their director sadly got Parkinsons, but they were the most amazing Jewish youth group and were an important part of my teenage years). There are modern-Orthodox neo-Chassidic services going on, and Reform services, and a group of people sitting and meditating. Me being me (when there are woods around, that is where I go), I go out for a night hike by myself. I come back in for Shabbos dinner and one of the neo-Chassidim ask me what services I went to. I tell him, slightly embarrassed, that I went out in the woods. He says, “Gevaldik! All the Rebbes used to go out into the woods! Rebbe Nachman used to disappear into the woods on Shabbos and his Chassidim couldn’t find him! That’s part of the Chassidic tradition!” Well, I felt a lot better about absconding to the woods on Shabbos night.

Fast forward 17 years. I’m visiting my friend Chaya for Shabbos. She’s a student at Adamah, the Jewish farming education program at Camp Isabella Freedman…the same camp where I learned that Chassidus and nature have something to do with each other. The last time I had been there was for a retreat when I was 20. Very little had changed. It’s the first time that I see the camp in the summertime, with all of its very green fields and its warm swimming pond. We walk up that same path through the woods to a timber-frame cabin with a layer of woodsy dirt all over it and no electricity or running water. “Perfect!” I thought. I was psyched to be sleeping there Shabbos night, where what I’d hear would only be the sounds of the woods moving in the breeze.

Then we go to see the baby goats. Next to playing with my own baby, playing with those babies was the time of my life. Chaya lets me into the goat yard, which is up on a hill above Adamah’s vegetable growing fields. The baby goats climb all over me. They give me baby goat kisses. They want to be petted and loved. Everything they do is hilarious and beautiful. I fall in love with goats as a species. I start scheming ways that my husband and I could spend extended time up there. Maybe we could be mashgichim in the camp’s dining hall for a summer? My friend who I’m visiting is the only frum girl in the Adamah program, where she has committed to be for the summer. The other student farmers are college-age Jewish hipsters. There is definitely not a Republican among them. They are committed to social change and local agriculture and fixing the environment, and I understand them because that’s who I was when I was in college. The house that they live in is down the road from the camp, and it smells exactly like every cooperative house I have ever been in — a combination of health food store bulk bins, fermenting cabbage, and something old and unexplained. It is a reassuring smell to me.

What I love about being there is that all these Jews have dedicated their summer to living the connection between Judaism and agriculture. They’re serious about it — they want to be farmers, and they want to be Jews, and it’s awesome. On Shabbos afternoon, I go to the goat barn with some students to see how they milk the goats on Shabbos. They show me how they do it in a different way then during the week, and I can see their pride at knowing how to milk goats, and also knowing how to milk goats as Jews.

These students at Adamah are doing something that goes so far back into Jewish history that it precedes any idea of Judaism as we know it today: They’re working the land. Jews were farmers (and builders, and all other manner of outdoor laborers) from the Sin of the Tree Of Knowledge up until World War Two when the rural Jewish settlements of Russia and Poland were pretty much all razed. Though Jews were never entitled to own land in most places (and therefore got into such businesses as money-lending), millions and millions of Jews lived agrarian, or at least semi-agrarian, lives. Entire tractates of Gemara are about agricultural laws and practices. The whole Torah revolves around planting and harvest — our major festivals are based on agricultural cycles. Our liturgy, from Psukei Dzimra to the book of Tehillim, celebrates G-d’s creation and sustenance of the natural world. That Judaism is something for city people in the diaspora (Israel does have more Jewish agricultural operations than anywhere else, though there’s an awful lot of city slickers in Israel as well) is sad to me. I think we’re missing a really big part of our collective consciousness.

But then there’s Adamah, this one little program dedicated to teaching Jewish kids to be farmers. I mean, they’re not going to be big time midwestern or Californian crop factory farmers — these are homesteads that they could run based on what they learn at Adamah. But there aren’t really any other programs out there like it, where the practices of both farming and Judaism are taught together. There’s B’erot Bat Ayin, a seminary that I went to that teaches “holistic Torah of the land” but not exactly how to be a farmer. There’s the Yiddish farm. There are religious kibbutzim, and secular kibbutzim, and assorted outdoor education programs in Israel (Kibbutz Lotan comes to mind), but for American kids who just want to learn how to raise goats and chickens, how to plant and harvest, and want to feel Jewish while doing so (without venturing alone into the far reaches of Israel), Adamah is the place to go.

If there are other programs like Adamah that I don’t know of, please tell me about them in the comments. I see the growing interest in agriculture among young liberal Jews as a sign of the times of Mashiach. They are attracted to and are reviving a way of life that is deeply, deeply Jewish. When Beis Hamikdash is rebuilt, we’re going to bring agricultural sacrifices. That there are young Jews who are pursuing knowledge of how to raise livestock, how to raise wheat, and they are doing it with joy and passion, looks to me like a sign of the ingathering of the exiles. Look, I get that many of them are not “Torah observant”, but they are connecting to something fundamental to the Jewish spiritual relationship with G-d, and they freaking love G-d’s creations. I really, really like that.