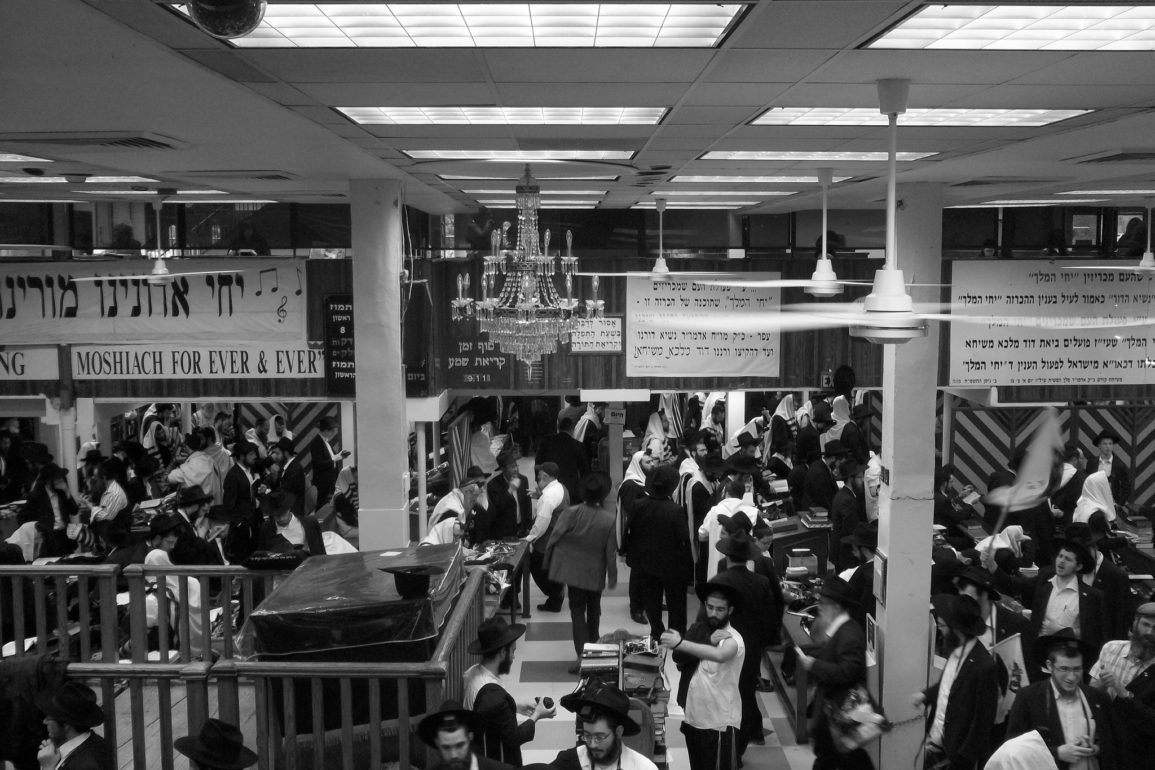 Why I Finally Call Myself A Lubavitcher

Elad is a friend for life, and I’m not writing this essay to diss him. It’s just that I think his essay “Why I Stopped Calling Myself Chabad” needs a counterpoint. Perhaps you’d like to hear a different, but equally irreverent, perspective on Chabad-Lubavitch and Crown Heights, Brooklyn. I, too, have gone through my own process of figuring out my Jewish identity, and this is my story.

It took me a very long time to call myself “Lubavitch” (Chabad being an acronym for Chochma-Bina-Daat which is actually used to describe other Chassidus and Chassidim whose focus is on intellectual, rather than emotional, human and G-dly attributes). The title did not come easily to me, and I often look back at my journey with a measure of discomfiture. (How big a measure is up to you.)

I remember sitting at the Shabbos table of a well-known and well-loved (deservedly, I might add…they are legendarily wonderful people) Lubavitch couple in Bat Ayin, Israel. I was surrounded by real Lubavitchers who knew things such as Chassidus and the life stories of all seven of our Rebbeim. I felt like an unqualified moron. As I sat at this Shabbos table regularly at that time in my life, I frequently found myself knowing that I was an interloper who had no clue what was going on. This knowledge was particularly compounded the time I accidentally (not “accidentally”) poured a pitcher of hot tea down the back of a fellow diner when I was trying to be helpful by serving the tea, and more so the time that I gave a completely incoherent dvar Torah (if it could be called that) based on my old seminary notes. I knew I had gotten in above my head as I read my dvar Torah (if it could be called that) from my notebook and saw a woman wearing a large head scarf give her husband a look that said, “What the hell is she talking about?” The hostess diplomatically followed my ill-advised non-lesson in Chassidus with a tolerant, “OK!”

It was a road filled with rocks, this road to calling myself Lubavitch. I was very surprised when my husband, a hard-core Lubavitcher of many years who became frum at the age when I was figuring out how to open a beer bottle on a door jamb, wanted to marry me. This community — meaning the global community — was something I felt like I wasn’t good enough for. By the time I met my husband, I was towing the party line and I certainly was not eating gebrokst on Pesach. Yet I still felt unqualified.

I came out of a background in things like identity politics, third wave feminism, queer studies, slam poetry, outdoor adventure, music festivals, and being a selfish, insecure asshole. And now I am Chassidic, and (I’d like to think) no longer a lout. I am still trying to shake that identity. I pass — mostly. Every day I amaze myself that I pass. I censor the things I say to people who I don’t know well. Sometimes I slip up and people look at me like I am completely buggin’, or at least vaguely crazy. Keeping Chabad minhagim is not enough; you need to not use phrases like, “Well that went over like a fart in church!” or “Exactly! David Foster Wallace said that in his essay Big Red Son.” You also can’t say, “That’s just like when I lived in a tipi and used a bucket as a toilet!” Stay away from saying those things. I should know. I’ve said them.

It was only in the past three years, since I left my job at an Internet startup for a job in shlichus, that I have come to feel authentic. When I wanted to leave my old job due to boredom and a grinding sense of meaninglessness, I prayed for a meaningful job. G-d, being the perceptive joker that He/She is, gave me a job at a place called The Meaningful Life Center. This was three years after I read a poem at the Jerusalem Poetry Slam (shout out to my girl Sadie Lynn) about having been dumped by a guy on the corner of Union and Albany, and then a few weeks later my boss sent me to New York to do a big project and the apartment I ended up subletting was on Union and Albany, right across the street from where I got dumped by a far less worthy man. It was there where my husband waited in the front foyer while I emerged smelling fresh for our dates. The joke was not lost on me.

The job–doing shlichus–has defined how I understand Chabad-Lubavitch, and the Rebbe, and my place in this community. When I was working in Manhattan and out of Crown Heights all day every day, only to really be here once a week, it was hard to understand that Lubavitchers are different from other Chareidim. At the time, I was lobbying to move to Flatbush or Queens because the housing there is better. Why did we have to live in this shitty neighborhood where it costs a million dollars to buy a house (two million, now) but one frequently sees discarded Hennessy bottles and used condoms on the sidewalk? People with early commutes can frequently witness women who have been working all night enjoying their well-earned crack pipes on the very sidewalks where we Chassidic ladies walk our babies. While they make for a more interesting commute, such sights combined with the exasperating real estate costs don’t lend themselves to wanting to stay in Crown Heights.

It took working in 770, in an office with real, live Chassidim, tasked with spreading the message of the Rebbe across the Internet, for me to realize that Chabad is where I belong. I love the Rebbe. It was only by virtue of getting to know what he said and did that led me, and to know that I actually have a task in sharing it, to love him in the way that a Chosid loves his/her Rebbe. No amount of wig-wearing and minhag-keeping and towing the party line could have ever done that.

When faced with the reality of living among a bunch of New York Jews with varying levels of politeness and friendliness (but bear in mind that I am not easily insulted), I take great comfort in knowing that the Rebbe was always frustrated with his Chassidim–always wanted more from us, and always lamented that if we’d do even a fraction of what he wanted us to do Mashiach would come already. In other words, I don’t expect Chassidim to live up to the Rebbe’s standards, or really any standards. I am realistic about the limits of most humans. And therefore, I do not find the people of Crown Heights to be disappointing.

Just yesterday I was pushing the baby in the stroller and I yawned. A strange woman on the street–out of nowhere–said to me, “You think you’re tired? Look at this!” and pointed at her daughter and brood of six young grandchildren. In an alternate universe, I might have been insulted, but I’m used to the quirkiness of the people here and instead I said, “How many children do you have?”

She said, “These are my daughter’s. There’s six.”

I said, “You should have nachas from them!”

She said, “You should have strength!” We laughed and walked on. Living happily here depends on how one reacts to people, and how much one enjoys the great moments of unity. The moments are just moments, but there are enough of them that strung together they are enough to make me appreciate this community. One can focus on the notes in a piece of  music, or the fact that in five of the 100 bars the trumpet was off key. I choose to focus on the notes–the notes being the incredible freedom that the Rebbe gave us to not just be Jews, but to be ourselves.

One could look at the yeshiva system and the ubiquitous black hats and see only pressure to conform. And yet I am a nonconformist who feels more at home among Lubavitchers than I have ever felt. Our institutions, and especially the comment sections of our local news websites, do not always reflect the fact that the Rebbe said that, “A leader must lead, a teacher must teach, a writer must write.” It takes intense motivation and commitment to continually find ways to use your own personality to relate to Chassidus. I’m not saying I’m perfect at it. The Rebbe might slap me upside the head when I see him the the World to Come. (OK, he won’t actually slap me. But he’ll tell me I could have done more with the resources that I have.)

The thing that I like about Lubavitch is that the avoda isn’t to fit in. It is to rigorously do things your damn self–learning, finding and fulfilling your own shlichus in life, generally being a Yid. I am a total weirdo and nobody has laughed me, or iced me, out of town yet. Despite the trappings of being Chassidim, I have found Lubavitchers to unusually value people’s individual contributions to the community. If you do anything here that takes initiative–anything at all that’s positive–people like you. Some people don’t, because haters gonna hate. But overwhelmingly people do. Elad might not call himself Chabad anymore, but people still like him. I find that there is room here for creativity, and enjoyment of life is a matter of motivation and patience. It’s even more a matter of listening to the Rebbe and internalizing what he says, and not just being a turd in a Jewish uniform, in other words living consciously with the understanding that living consciously is one thing that you can’t force other people to do.