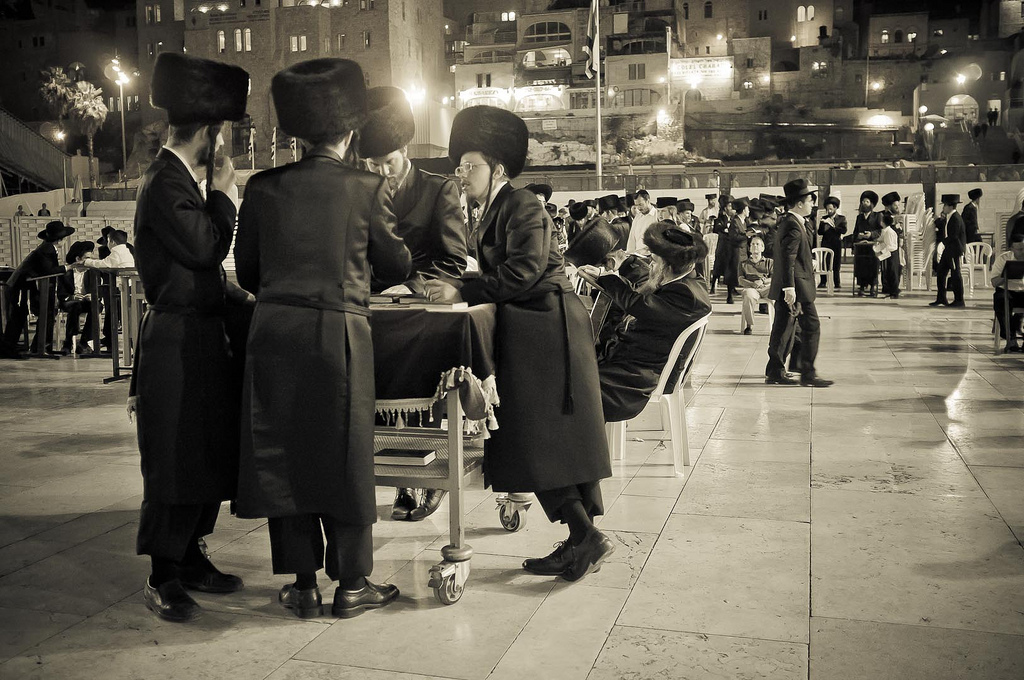 Clothes Do Not Make The Jew

“Please step back. You keep touching me.” That was me in line at Raskin’s (a local fruit and vegetable store) a few days ago. The guy behind me (bushy beard, tzitzis, etc.) was up in my space and I was getting annoyed. I mean, if he doesn’t care about being modest and wants to touch random ladies in the checkout line, cool for him, but don’t get me involved. I don’t want randos to touch me. Since when does a crowded store and a long line entitle a strange man stand an inch away from and keep bumping into the woman in front of him in line? Dude seemed surprised that I told him to back off, and a bit embarrassed that he had been called out on being a total skeeve, but he moved back a footstep. I coldly ignored him as he mumbled an excuse.

I told my husband about it over dinner. He said, “You can’t take anything for granted anymore. Not tsnius, not anything. Ever since the iPhone was launched.”

“Really? I thought it was because of mixed dancing,” I said.

We were joking about it over stir fry, but we both were genuinely disgusted. You can’t take anything for granted. People are disgusting and nowhere is safe. Nowhere is safe except our own house, and the houses of people who care about being decent and appropriate people. Appearances mean nothing.

Another story: I was shopping in Boro Park with my mom, and she said, “I hope these people aren’t upset that I am wearing pants [vs. wearing a skirt].”

I said, “I’m not embarrassed by you. They’re just chassidim; they’re not G-d. And every single one of them has problems.”

Another story: One of my favorite people and rabbis in the world is Rabbi Levinger, the Rosh Yeshiva of the Mayanot women’s program. You could not pry a disingenuous answer out of him if you tried. I don’t remember the context, but one time he told me a story that stuck with me: Rabbi Levinger asked a rosh yeshiva of another “baal teshuva” yeshiva, “What do you consider to be success?”

The other rabbi said, “When a student gets married.”

Rabbi Levinger said, “When he gets married? That means he becomes someone else’s problem.”

Matthue and Elad recently wrote about dealing with Jews who look frum on the outside but act immorally, or at least act like turds. Then in my own life, I had a couple super-uncomfortable experiences with baalei-teshuva who had really not dealt with their shizz before donning full levush (don’t get too high on yourselves, FFB’s — some of y’all have the same problems except you dressed this way from birth). And then Matisyahu wrote that thing on Medium in which he admitted to having drug problems and emotional problems which could not be solved by dressing up like a chosid — he still was who he was, with all his shtick. Then a bunch of rabbis in Australia got together and made a film vowing to not protect molesters — molesters inside their community who look and talk like chasidim, but actually are molesters and rapists.

It all brings me to a point: Clothes do not make the man (or lady). I’m not too interested in the question of whether or not you can separate Jews from Judaism. I see the issue as much more basic: The clothes — the black and white, the kippot, the hats, the wigs, the skirts, the stockings — they are clothes, people. The Heimish accents, the casually-dropped Yiddish phrases — it is nothing more than shtick. Yeah, the garments are important in that they serve a role in keeping Jews Jewish and in identifying communities, but when you come down to it … they are clothes. You can buy them. You can put on an accent — I mean, I am not from Atlanta but I can sustain a darn good Atlanta accent for days. As we all know, anything you can buy in the material world is not eternal. Even holy books: The words inside them are eternal, but the physical pages and binding can decay. Ask anyone who has accidentally put a Tehillim through the washing machine.

I used to wear jeans and a T-shirt when I felt like I really couldn’t hold it together. That was years ago. I don’t have jeans anymore. I don’t have them because if I had them I would wear them. I organically, honestly love jeans.

What do we expect from each other? That we’ll all be tzadikim? That if someone gets dressed in the morning, suddenly his problems will disappear? That if we fake it, we’ll really make it? People are who they are. Change comes gradually with practice. Because a man has a beard, he’s not a pervert? There are a lot of bearded perverts out there, Jewish and otherwise. How much trust can you really put in something that can be shaved off?

I don’t expect much from people because I know they are just wearing clothes. It doesn’t mean I want to have them as influences in my life nor allow them to make me feel uncomfortable/unsafe, but I also don’t resent them for being human.  You can’t take anything for granted. People are disgusting and nowhere is safe. Nowhere is safe except our own house, and the houses of people who care about being decent and appropriate people. Appearances mean nothing.