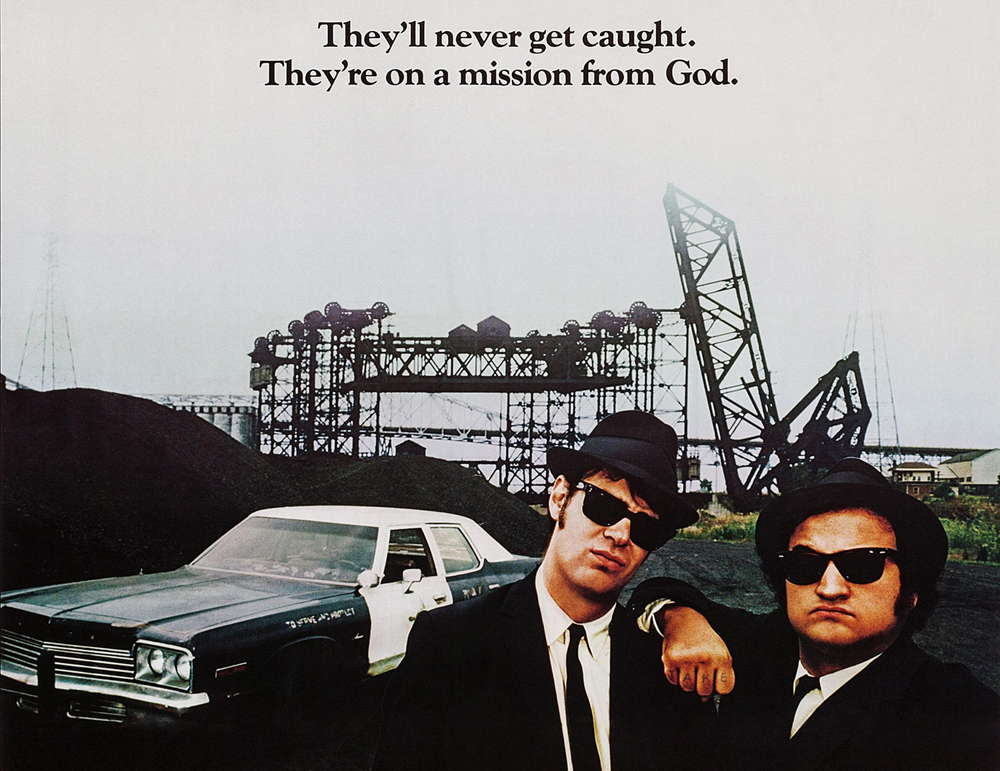 It Was Dark, They Had 106 Miles to Travel, And They Were Wearing Sunglasses

(If you’ve never seen the Blues Brothers movie which came out in 1980, you probably never will, but it is only fair to say there are spoilers here.)

You probably know that the phenomenal Aretha Franklin died this week. It’s been all over all the media.

I woke up thinking about her. So I settled in, with a cup of coffee and some scrambled eggs, to watch The Blues Brothers mostly for that one great scene with her singing “Think” backed by a chorus made up of ladies who just happen to be sitting at the counter in her soul food place. (As an aside, there are a lot of great musical numbers in this movie including the ones with Cab Calloway, James Brown and Ray Charles. The choreography is pretty good too, and if you’ve never seen 80s dancing, this is a great intro.)

If I’m honest, this is one of my favorite movies for a lot of other reasons. One of which is the scene where the two brothers, Jake and Elwood, destroy that huge shopping mall. I love watching them drive through it, wrecking all those stores, while calmly talking as if they were just strolling around in it and shopping.

When I lived in Denver, I worked at a much smaller mall, and I had some good fun imagining something like that happening in that one. No, I did not love my job.

But I do love car crashes. They destroyed 103 cars in the original film and (except for destroying 104, on principle, in the sequel), held the record for most cars destroyed in a movie until 2009.

It was kind of like a square dance. Crunch! Crash! BANG! Spin around! It doesn’t get much better than that on screen. Especially since – NOBODY – got hurt! All the bangs. None of the mangling and death. Most fun to watch ever!

But today, as I was watching Jake and Elwood bounce around from one disaster to another, like balls off the bumpers in a pinball machine, I became more and more aware of something else, something deeper.

Throughout the movie, Elwood keep repeating this line: We’re on a mission from G-d.

Carrie Fisher’s unnamed character tries to kill them again and again. With a bomb – a flamethrower – a machine gun. They walk away each time… filthy, but without so much as a scratch.

The Illinois Nazi Party – and the Good Ole Boys Country Band “Straight from Nashville” – also try repeatedly to kill them. Again, they manage to get away every single time.

Totally unlikely but, I think, one of the most fun to watch scenes in the movie: Jake and Elwood are in a high speed chase followed by the leader of the Nazis and his second in command (who is, it turns out, in love with his leader), and they manage to brake with the front of their car hanging OVER THE EDGE of an open drawbridge. They back up, flip their car BACKWARD OVER the car chasing them and speed safely away. (The Nazis, in case you are interested, had less luck stopping. There was, however, enough time during the fall for the declaration: I have always loved you. The look on the Nazi leader’s face – priceless!)

And the folks in those one hundred and three highway patrol and city police cars, plus the cars that were still moving – plus the National Guard – and SWAT – try *real hard* to stop them. And all those people arrive with their guns out and handcuffs at the ready, one minute *after* the money was delivered and the receipt was signed at the Cook County Tax Assessor’s office. One minute after the mission was completed.

At least in the movie, it really was a mission from G-d. And nothing, and no one, was going to stop it until it was done. Not resistance from other people, including Aretha’s character. Not all the people chasing them for whatever reason. Not even the brothers themselves.

To make a really sharp, car crash inducing change of subject here, toward the end of the movie, I realized I was watching an example of Hashgacha Pratit, G-d’s Divine Providence.

According to the Baal Shem Tov, Hashgacha Pratit means that G‑d not only knows what is going on in our world, but is actively engaged in divine supervision of every detail, every occurrence, every creature.

My Rav has told me, more than once, that I ought to have more faith that this is how the world works. And it’s not that I don’t believe what he tells me. It’s just hard for me to accept that G-d would be specifically concerned about…well… me.

Who am I… what am I… that G-d should be concerned with me? I don’t have any feeling that I’m on a special mission from G-d.

But then… who, or what, were Jake and Elwood Blues? Even leaving religion aside, they were not among the “good guys.” Still, G-d was definitely with them.

I can’t say I’m sure about any of this, but stranger things have happened. Cars have flipped over backwards – and sped safely away.

My Rav has also told me that Hashgacha Pratit is real, whether you believe in it or not. But, he says, it is only when you begin to believe in it, that you start to see it operating in your life. Or, maybe, it’s the other way around.

And something did happen to me this week that made me consider that it just might be here in mine.

A few months back, I wanted to quit a job I had grown to hate. I started looking for other sources of income, and I told the Universe I’d take any semi-reasonable job anyone offered me. Someone did, and I did. It was immediately as bad as the one I had left, although in different ways, accompanied by less money. I was just about to start looking again, when a friend offered me, what I can only describe as, my dream job.

“YES, I’ll take it!” I almost shouted. “Do you want to think about it?,” she asked. “Not even a little bit,” I responded. Which was, perhaps, not my best response.

It was a contractor position, which I did not, in fact, think about. And it turned out that getting the company to pay me was not just a question of signing a W9, showing up and working; and then having checks or direct deposits, *automagically* start appearing.

To be fair, it’s a big company. Several departments are involved, who do not necessarily communicate and play well with each other, or, as it turns out, with me. I live in one of the more expensive areas in the US. Ten weeks in, with a big chunk gone from my savings, I was starting to get a little, well a lot, nervous.

I was still extremely happy with the job. And, of course, I knew the company would pay me eventually. And I did have faith that G-d would look out for me. I mean, having such a great job show up out of nowhere just when I needed it, certainly seemed to show that She would.

On the day Aretha died (although I wouldn’t find out about that for hours) I woke up at 4AM and completely – how shall I put this without extreme profanity – had a major – no-two-year-old-has-anything-on-me – meltdown!

My brain would *not* turn off.

Yes, of course, they were going to pay me, but when? Would it be soon enough for me to pay my rent? And exactly how soon was soon enough?

Was I going to have to move? Yes, I knew of a place cheaper not too far away, but it was also much smaller than my current place. What would I do with all my books, and all that charity quilt fabric? (Yes, I do run a charity that makes quilts for the local women’s homeless shelter.)

Should I perhaps apply for something in retail to help me get by? Would my back even allow me to stand up for an eight hour shift?

It went on; and it went on. I finally gave up on sleeping. I got up and did some serious praying, trying as hard as I could to feel the faith I know I have; the faith that had kept me going to this point. I have to admit it didn’t work very well.

But it was my day to go to the office (I usually work remotely, thus dream job for an introvert), and it was on my ride in on the Metro that I found out about Aretha. That gave me some perspective. Death always makes your current issues, whatever they may be, look a whole lot smaller.

After being busy enough at work, and bummed enough about Aretha, not to dwell on my issues, my mind attacked me again on the way home. I had driven to the Metro because the National Weather Service had promised a severe rainstorm at the time I get home. And neither me nor my laptop would have appreciated getting soaked. Of course, it didn’t rain, so I was feeling grumpy about having paid the outrageous amount they charge for parking at the Metro. What had I been thinking?

When I got in the elevator from the parking garage at home, I started thinking about whether or not I should stop and check my mail on the way up to my apartment. I don’t check my mailbox every day. Most of what I get is either junk mail or bills. I’m seldom excited about either, and in any case, I’d checked my mail the day before.

Then my mind immediately started up again. What would I do if I couldn’t continue to pay for nice, safe, close, never have to shovel snow, parking?

I was so annoyed with myself, and my mind, that I had pretty much decided to skip checking, when I got a major *Divine Nudge* right before the floor where the mail lives.

So I went to check. And… not only was there one check, there were *three*. All that they owed me to this point. I can’t even describe how it felt to see those envelopes. (I hadn’t even known whether they were going to send me checks, or do direct deposits, as they had put through a test deposit earlier in the week.)

I don’t suppose getting a feeling you should check your mail seems like a major thing. But if I hadn’t done it, I would have continued to be a miserable, sleepless mess, for however many days it might have been until I did finally get around to checking.

Was that Hashgacha Pratit? Was seeing Divine Providence at work in a random movie? I don’t know, but those things certainly made me stop and think.

Maybe I’m walking around in the dark, on a journey of 120 years, with sunglasses on. Maybe we all are.

I still can’t honestly say I’m totally sure. But maybe that *Divine Nudge* was G-d’s way of telling me to take those darned things off and appreciate Her light.