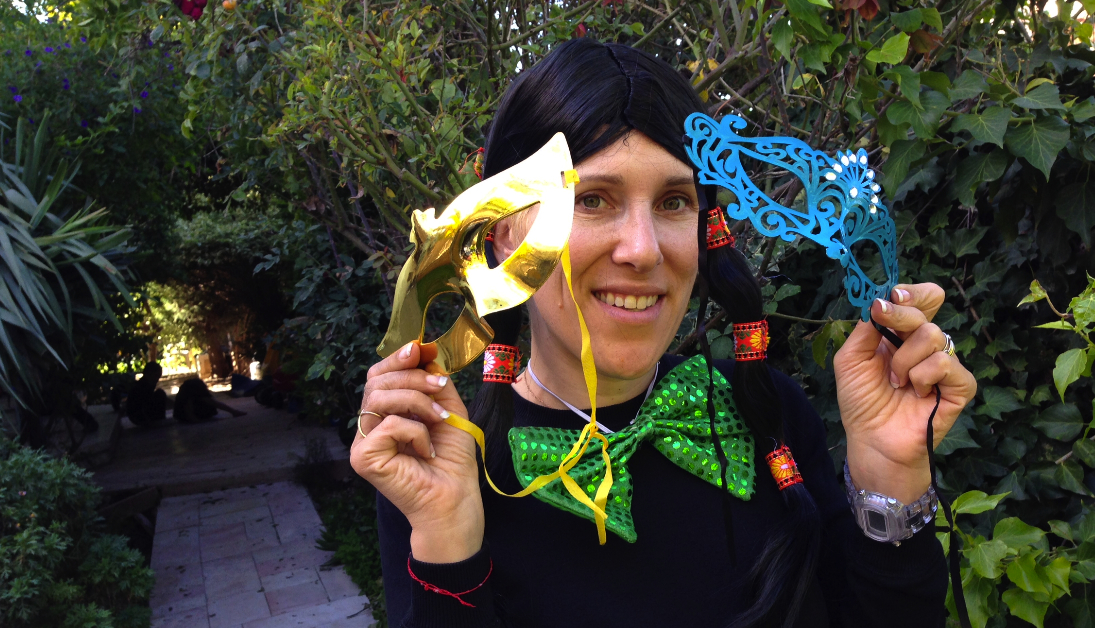 Time To Take Off The Masks

At a certain age, the mask comes off. Maybe we stop caring what every single person thinks of us or perhaps we’re just comfortable with who we’ve become. The lucky people reach that point early in life and for others it’s an ongoing struggle. At some point, the masks come off.

Here, in the Holyland, and in Jewish communities around the world, Purim Fever has hit the streets. People of all ages are decked out from head to toe in costume, make-up, masks, and wigs. In Israel, as this goes live, it’s Taanit Esther, the Fast of Esther. We refrain from partaking in food and drink to commemorate our salvation from annihilation.

The story goes something like this: Over two thousand years ago, King Achashverosh, ruled in Shushan. He was the most powerful ruler in the world, and had a strong disdain, perhaps even hatred of Jews. During the same time, a Persian, called Haman, wanted to massacre the Jews, but needed the King’s authorization to proceed with his plan. The King wasn’t too fussed, as long as there was something in it for him. The Jewish Queen Esther wanted to tell the King what was really happening, but going to Shushan to speak before the King was dangerous. Many people, including Jews, thought she shouldn’t go because it would just irritate the King and make things worse for the Jews. She asked the Jewish People to fast and pray for the success of her task. They did, the King accepted her words, and the plot to destroy the Jewish Nation failed.

Haman’s plan to obliterate the Jewish People was scheduled for the 13th of Adar, but the plan was thwarted and instead, Haman was hanged. The Jewish People came together and triumphantly defended our people against every attack. The next day was the 14th of Adar and the Jewish holiday of Purim was created to celebrate. On the 13th of Adar, we won the fight against the evil Haman, and it became a day of fasting called Taanit Esther.

When comparing the story of Purim with our other holidays, the stark difference is how the story of Purim, Megilat Esther, makes zero mention of G-d or His miracles. There’s no mana from Heaven, no angels fighting mortals, and no mention of G-d. What happens in this story is like an extreme alignment of convenient coincidences. The right people in the right places at the right time. The magnitude and glory of the Purim holiday all boils down to chance. The word Purim is defined as lots, and refers to the lottery that Haman used to choose the date for the massacre of the Jews. Haman relied on lots, a random gamble depending on nothing other than chance. He refused to recognize G-d’s protection of the Chosen People, and had the chutzpah to humiliate and attempt to put an end to the existence of the Jews. Purim is a holiday celebrated, amongst other things, with masks and costumes, which hide our true identity. The custom of wearing masks reminds us of how G-d’s greatness and protection of the Jewish People, was hidden within the story of Esther.

Concealed beneath the surface is Hashem’s divine providence that is present and key in every part of life down to the most mundane detail.  Haman’s evil plan unraveled and G-d’s work was identified and revealed by the Jewish People. This recognition is what has been celebrated for thousands of years and continues to symbolize the essence and the lifeblood of our miraculous existence as a Jewish Nation. We continue to survive and thrive in the face of a world full of enemies who seek our destruction. The existence and prosperity of Israel is the ultimate living testimony of Jewish survival. Israel is the only nation on earth that inhabits the same land, carries the same name, speaks the same language, and worships the same G-d that it did 3,000 years ago. We’ve been ruled by the Persians, Babylonians, Greeks, Byzantines, Arabs, Crusaders, Ottomans, and the British. Nation after nation have tried to destroy us and and will continue to do so. No matter how desolate and hopeless things may appear on the outside, we keep the faith that underneath the appearance of impeding death and danger, the hand of G-d is guiding each and every detail with divine foresight, kindness, and compassion. While the traditions of Purim symbolize covering up with masks and costumes, there comes a time when the masks come off.

As I type, Israel’s struggle as a nation continues. We are surrounded by enemies, surviving in a region threatened by war and conflict.  Today there is a President in Washington, possibly the most powerful man in the world, who has strong disdain and lack of respect for Israel’s leader. As the holiday of Purim nears, Israel’s leader appears scorned by the superpower’s president, which is publicized around the world and in every headline. Today, Iran, which what was once known as Persia, is ruled by a leader who seeks the destruction of Israel and is hard at work acquiring the weaponry required. On the Fast of Esther, we observe and remember the fasting prior to Queen Esther’s plea to the King thousands of years ago. Now, more than ever, we must not be ashamed, yet emboldened and proud to remove our masks and reveal that the Nation of Israel is here, glorious and dignified. We are Israel and G-d dwells with us.