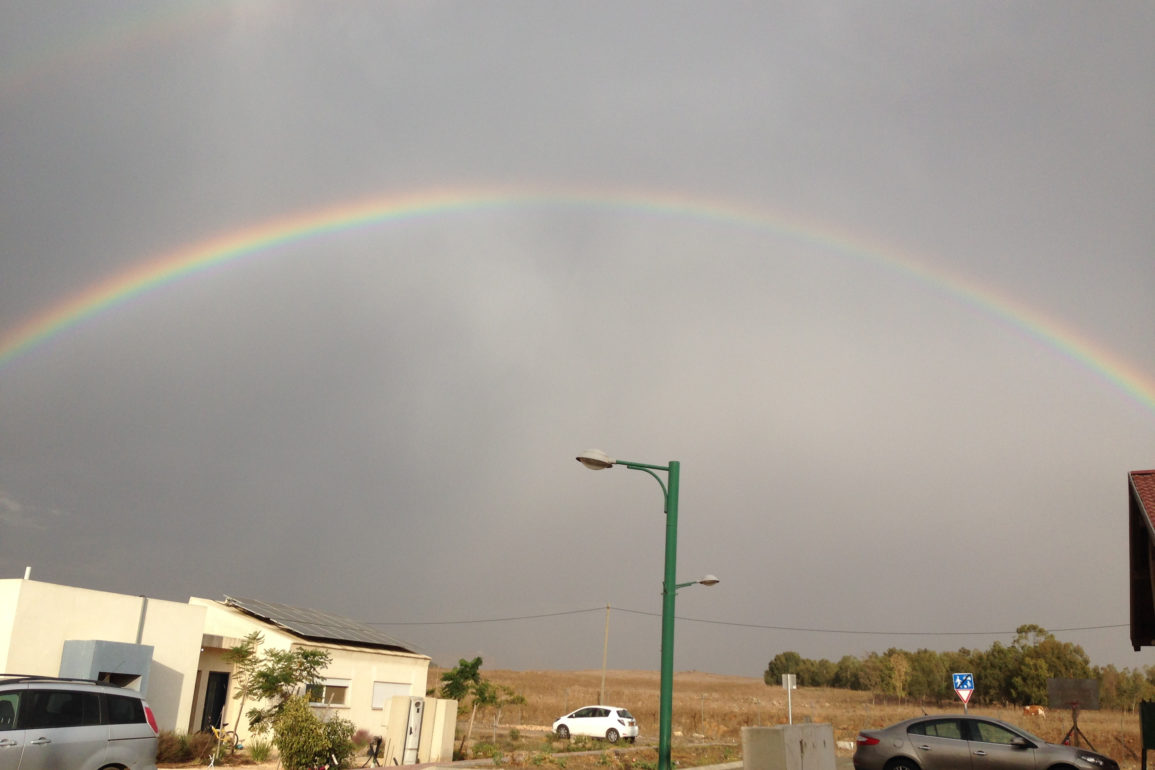 The Rainbow Before The Storm

Late Friday morning, we loaded up the family minivan and my husband, our five children, and I set out on a two and a half hour drive up to the Golan Heights to experience Shabbat of Sukkot, with our dear friends, the Zadoks, and fellow Hevrian, Sarah. Israel is such a tiny country, we rarely drive anywhere that takes longer than an hour let alone two. The road trip, while only a matter of hours, was a happy event for my family. We experienced the breathtaking view of Lake Kinneret (Sea of Galilee), Israel’s largest freshwater lake. From the framed view of the car windows, the children watched the boats fly by, the banana tree fields flash across the windows, and the red and white grazing cows. I longed to stop the car at every site but Shabbat was coming and we were hoping to beat the rush of the Chol Ha’Moed, Sabbath Eve traffic. We fantasized about future trips to the Kinneret shore and hiking in the rolling hills of the Golan.

On the way up, the sky grew hazy and when we arrived at the Moshav, where our friends live, it was cloudy. I called Sarah to let her know that we were driving through the gate. As an added surprise, I found out that I was also about to meet another Hevrian, Yocheved Sidoff, visiting from Brooklyn, NY, with her family.

The weather continued to change drastically as Shabbat approached. The wind intensified and dark pregnant clouds hung low. Unexpectedly, the most spectacular rainbow I have ever seen appeared in the sky, directly over our heads. The red, orange, and yellow shone like blazing fire, and the green, blue, and purple were as bright as gems. My heart pounded as I ran towards it, trying to capture the entire arch on my mobile phone camera. The supernatural brightness of colors, directly overhead, was beyond magnificent. On the edge of Israel, in the Golan Heights, the air is different, clear, fresh, and light. Giant cows graze, just a few paces from the chain-link fence of my friend’s backyard, and the dewy scent of rain hangs in the air. The sudden appearance of the tremendous rainbow was a startling interruption of the peaceful air. Families from neighboring homes came outside to witness God’s rainbow. We heard whoops of excitement from children in the street. Neighbors hollered out to their friends to come see the unbelievable arc of colors. My young son, just shy of nine, said, “Ema, don’t look at that rainbow, it’s a bad sign that Hashem (God) is reminding us that He can destroy us, maybe we deserve to be destroyed.…” he mumbled. I brood over that idea. I know the deal with rainbows yet they’re so special and miraculous. It has to be more complex than a reminder of the flood and destruction. Referring to Parshat Noach, we learn that God created the rainbow as a symbol of His covenant with us that while He has the power to destroy the world, at any given moment, He will never do so again. The beautiful rainbow, the huge arc of every color, is such a breathtaking sight. Surely it’s a gift. A reminder that God is good. Thousands of years after the Great Flood and Noach and the Ark, God is speaking directly to us. Here, enjoy this awesome masterpiece of My greatness in your sky. Remember how I once flooded the earth with a storm that destroyed everything but today, I give you this beautiful sight and I remind you, right now, that I will never destroy you again. For a few minutes, many people united in the street of the Moshav sharing a Human moment of wonderment. The inspiring hugeness of that rainbow was unavoidable and in a matter of minutes, it vanished. The feeling of seeing a great miracle lingered for the rest of Shabbat. It was the rainbow before the storm. Up on the Golan, you hear and feel periodic booms, in the distance, from beyond the Syrian border. Later that evening, as we enjoyed delicious flavors; fresh baked challah, Yemenite spices, aromatic delights that Sarah prepared in honor of Shabbat Sukkot, the wind grew stronger. The walls of the temporary dwelling, the Sukkah, flapped and buckled under the force of the wind, sending drinking glasses flying off of the table, shattering into tiny shards. We sang the blessings of Birkat HaMazon accompanied by God’s drums of thunder, a completely different tone from the booms of the war going on just beyond the Syrian border. When we went back into the house, that’s when the lightening began. Pink and purple bolts could be seen striking the skies from every direction. Some of our combined 10 daughters and sons were outside when two bolts of lightening struck the Moshav and all went completely black! We heard the screams of the children. We froze, in the pitch black of complete darkness. Every light was out. It was impossible to see even an inch in front of our faces, and then, from the second floor panoramic windows, we saw the fire. Two fires. One fire, in the fields, some few hundred meters in the distance, and one fire, just down the street, so close, it looked like it was in one of the neighbor’s yards. The fires quickly grew taller and expanded into great jagged walls of orange, red, and yellow; like the colors of God’s great rainbow. The children came running into the house and we embraced them as they hurriedly gushed about what they had just witnessed. In a remote place like this, surely they must have a fire station nearby (I reassured myself) for instances like these. Does lightning often strike here? I asked. By my friends’ reactions, this was clearly a phenomenon they hadn’t experienced before. Men from the community ran towards the disaster and soon after, emergency vehicles arrived to battle and eventually extinguish the fires. It took time to calm some of our children, who were traumatized by the whole scene. Children accustomed to hearing the booms of missile interceptions and air raid sirens, had witnessed something even more rare; lightening striking the earth right next to them!

That night, regardless of my comfortable bed, I tossed and turned. The transcendent magnitude of God’s presence is something I try to acknowledge daily, however it’s not everyday that we see God so up close. His rainbow. His fierce wind. We witnessed God’s powers; His bolts of electric lightning and His blazing fire on the Moshav. It was an intense spiritually exhausting night; physically fierce and tangibly intimidating.

In the morning, I awoke to a quiet household in an exquisite state of calm. The air was still. A burnt aroma lingered in the air from the fires and I could see the smoldering embers and smoke rising from where the lightening struck. Several Sukkahs, on the street, were reduced to a contorted mess of poles, wood, and palm fronds. Tangled tinsel decorations, that flew away last night, had entwined and decorated the chain-link border fence of the village. Our husbands were at shul (synagogue) and the children played while I prayed silently. I could not stop thinking of His rainbow, His wind, and His lightning. The immenseness of His acts, His miracles, overwhelmed me and my emotions imploded. I shook with sobs and tears, not from fear or sadness, but from the awe of God’s presence and His message. I opened up Parshat Noach and skimmed through, focusing on the explanations of God’s rainbow after the flood.

As soon as Sarah’s family realized that there were families in the village without a kosher Sukkah to dwell in, they invited them to come and eat with us in their Sukkah. Together, we mobilized tables and chairs and brought food and wine from 3 or 4 other homes on the block. The Zadok Sukkah brimmed with families sharing their ever-expanding Sukkah.

After Shabbat, I Googled, “how rainbows form”. Two physical phenomena exist within a rainbow: refraction and reflection. Refraction happens when light passes from one substance to another; from air into water. The rays of light bend at different angles as they pass from element to element. In a rainbow, sunlight enters the raindrops and is broken into different colors heading in different directions. The light is reflected and magnified by the raindrops and passed back into the air again, proceeding to become further refracted. From ONE light, every single color of the rainbow emerges. Every color on earth comes from that one original light. Under the exact right conditions, the physical chaos of reflection and refraction create a spectacular rainbow, uniting all of the colors of the universe into one beautiful arc of colors. God sent this day. God sent the wind, and the lightening, and the fire. God created the physics of reflection and refraction and sent us all of His colors. We are reminded of the flood and the covenant that God made with us and we are also reminded of  the tremendous diversity of all those colors and yet the unity needed to create so much from just ONE light. Sukkot is the holiday of temporary dwelling, changing weather, and faith. It’s a time to leave the perceived safety of our permanent dwellings and go outside, under the stars, into the elements. It’s a time to unite, our many vibrant colors, together under one Sukkah. The rainbow is a reminder that He could have destroyed us, but He didn’t. God sent the rainbow before the storm.