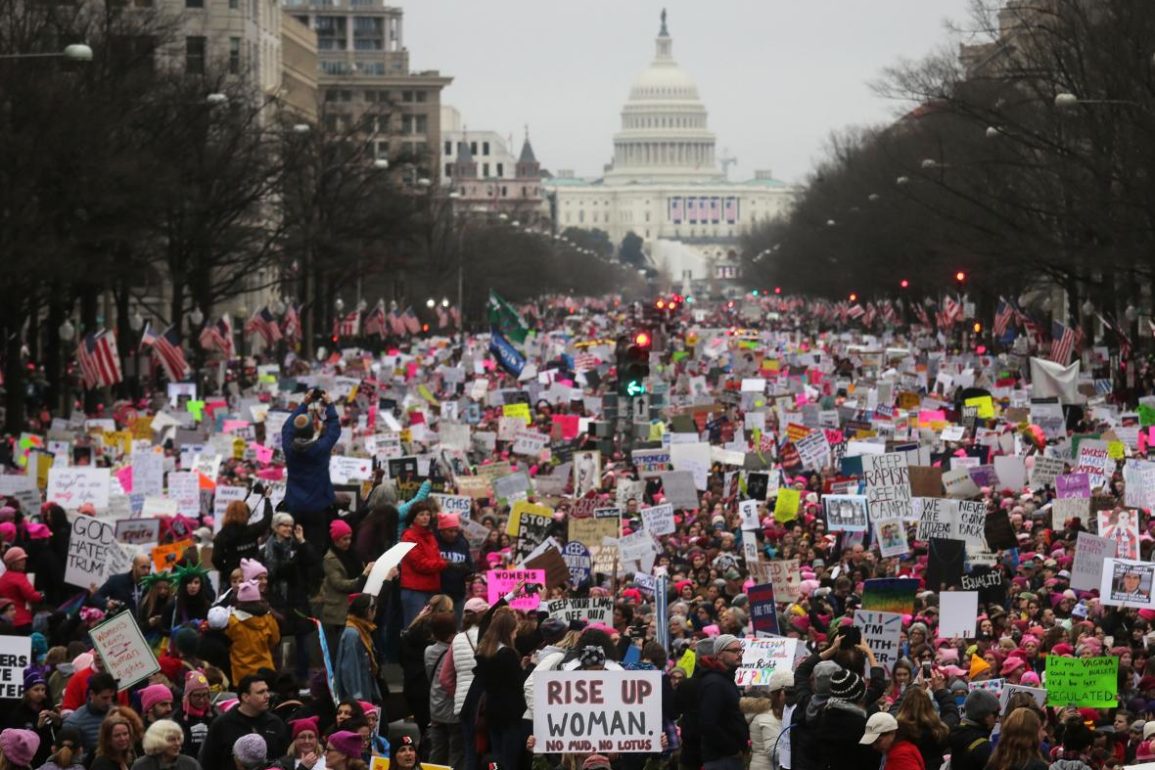 Feminism, The Women’s March, And My Hasidic Identity

The last couple of days, my feed — and the world’s attention — has been possessed by two things: the inauguration and its aftermath, and the Women’s March on Washington.

The barrage of images, news stories, speeches, interviews, articles, commentaries and symbolism of these historic moments cause me to stop and take stock: as a Jewish, American woman, how do I fit in all this?

The march happened on a Saturday. And while there were those that were able to reconcile their religious practice and still march in Washington on Shabbat, physically attending the march was not an option for me. But I ask myself: if the march had been on any other day of the week, would I have gone?

Growing up in a Hasidic community where there is an emphasis on mystical understandings of Torah and gender roles, I was taught the immense privilege of being a Jewish woman. And not only vis-a-vis my eventual role as a wife and mother, supporting others. Being a woman meant a power to transform and reveal the essence of all things; to see beyond the surface that confounds so many; to birth possibilities hidden to most; to incubate hope, already lost. It was in the merit of so many of our foremothers, audacious warriors, who advocated for truth that the Jewish people were saved time and time again. It would be in our merit that the redemption would finally come.

I never felt second class. Do not feel subordinate to men. Never felt ashamed behind the mechitzah. Didn’t feel like an object because Jewish law beholds me to laws of modest dress. Don’t feel like I want to worship like other religious men.

And while I do experience this nuance at times that perhaps a man would be a better fundraiser; negotiate a better lease; talk better business; advocate for better deals — even be a better leader — I don’t feel trampled upon by men in power. I don’t feel disrespected by my rabbis. I don’t feel like my husband or son are taught to disregard my femininity.

I don’t feel unequal or less than.

I recognize that in so many ways, even as a contemporary Hassidic woman, my life and practice are unique. I hold a position of leadership in my relatively insular community and enjoy the privilege of influence.  I am visible, my voice heard through many circles. I have multiple platforms to share ideas and thoughts and — more or less — am still accepted regardless of differing ideas. I sit on a board and have addressed, as a public speaker, men and women in the same audience. I spent many years in rigorous, text-based Torah study, teachings of all kinds available to explore. I attended college and graduate school with support of my family and community. I was given the space to formulate and fortify my own role as a Jewish woman, with all of its beautiful subtleties and nuance.

I revel in my identity as a Hasidic woman.

Yet I know that there are so many others within my community and beyond who do not share my experiences — or beliefs.

Last month, I was accepted into the inaugural cohort of the Wexner Foundation’s Field Fellowship program, a three year leadership enrichment fellowship for Jewish leaders across the country. Of the fifteen inaugural members, eleven of us are women, including a handful of female rabbis and one rabba — a female, Orthodox, ordained rabbi.

I have not met them yet. I do not know yet what our journeys as a cohort we will travail. But I envision there will be conversations around leadership, efficacy, gender roles, and our identity as Jewish women. And I imagine I will be called upon to speak to my unique perspectives, experiences and beliefs as a Hasidic woman. Are there leadership gaps? Are women in our community fully actualized in their roles? How do we teach our daughters to be modest in thoughts, speech and dress — without alienating and objectifying them? How can we more deeply empower our women to be more engaged in text study as a passage to deeper engagement with Jewish practice?

How do we explain that of those women who leave ultra-Orthodoxy, many report they do so because of subordinate roles of Jewish women within the ultra-Orthodox community?

The are women who are not visible. Who are asked to sit in the back seat. Who do not have access to higher education. Who are not given the tools to learn our holy books from the inside. Who do feel less than in our synagogues. Who do want more.

But the March was not about these issues, per se. And our identity as Jewish women is not just about personal religious practice. Its recognizing that we live in a world where so many people continue to suffer — and we have an onus to ease that pain.

I, like women the world over, have been verbally, emotionally and physically assaulted by men. Crude glances, demeaning remarks, roaming hands- I have been objectified in ways that may seem subtle, but still hurt. And in the face of Trump’s presidency and his open misogyny (love him or hate him, there is no way, I believe, to understand his vulgar “grab them by the p—y” provocation any other way), I, like women the world over, do feel more vulnerable. I am more aware of a certain underlying misogyny apparent in some circles. I am more aware that even with codes of modesty and conduct, our daughters – and sons – are vulnerable to sexual attack. I am more aware that through the sensitivity of rabbinic law and our government, I am afforded choice over my reproductive rights — whereas so many women are not. I am married to a beautiful, sensitive man who can accept my “no, not now” — whereas so many women, even in marriage, are forced to comply. There are women who suffer in domestic violence, from sexual mutilation or under oppressive political regimes. There are women who may never advance beyond less-qualified men. There are women who are tired fighting alone.

With all the privilege and pride I feel and have been afforded, there is still pain and prejudice.

“Chanum bosh,” my Persian grandmother would encourage, and sometimes chide, me.

Sometimes I understood that to be quiet.

Don’t be too smart, too strong, too anything that might rock that already perilous, delicate balance of power.

But today, right now, in my life, being a lady means so much more.

It means feeling my power course through me, in all its glory, and orienting it toward good.

It means feeling alive and inspired, my femininity a compass oriented toward light and truth.

It means being me, yet striving for better.

I am a woman – daughter, sister, lover, friend, wife, mother, queen – and I am created in the image of G-d.

And for that, women of the world, I will march.