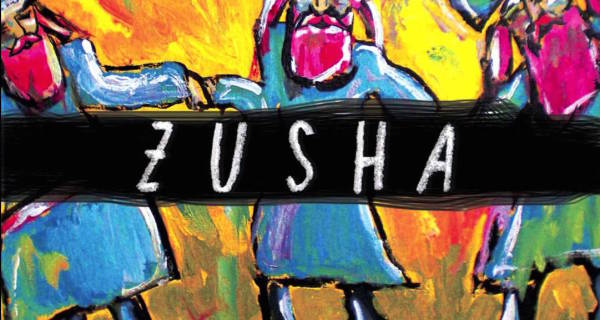 Zusha | Sound Of Our Times

Cultural innovators often descend upon us surreptitiously, taking us off guard with that gilded grasp of reality that makes things go ‘bang.’ When we perceive what is sure to be a revolutionary cultural artifact, we just know. Instantly. The rarefied voice of the times: “Sometimes there’s a man… and sometimes there’s a man, and he’s the man for his time in place”

Im talking about the Zusha

Two weeks ago, I heard Zusha for my first time. Rather, I saw Zusha. A week before their self-titled album launched, an electrifying album cover scrolled across my Facebook feed:

And then I knew.

Zusha brings to the forefront of our cultural consciousness that spot-on mix of deep Jewish authenticity and graceful universal resonance. It is music that permeates the soul, drawn from wellsprings of holiness and imparted onto the parched senses of us digital age denizens desirous of a genuine musical experience. The band’s namesake, the Rebbe Reb Zusha, would be proud.

Zusha of Anapoli was foremost among the nistarim, the hidden ones. Normal folk would disregard this itinerant shlepper, tramping around in raggedy clothing and reading from a book of Psalms at the back of the shul with the village paupers. Yet the Tzaddikim of the generation would tremble in his presence. Zusha was as real as real gets.

Though an incredibly revered and wise sage, Reb Zusha was not particularly known for his erudite scholarship. Once, the great Vilna Gaon (Gra) was startled to hear that Reb Zusha solved one of the Gra’s most perplexing Talmudic questions. “ How did this Zusha know that Yerushami [referring to an obscure passage in the Jerusalem Talmud]?!”

When the Gra’s statement was relayed to Reb Zusha, he replied, “I got it from the same place the Yerushalmi got it from.”

Zusha embodies simplicity. In an era where our presence of mind is inundated with the cacophonous rapture of endless sensory and not to mention digital data, Zusha distills their potent message into one or two mesmerizing lines of sheer holiness. Power. Carrying these wisdom infused notions are Zusha’s melodic novella, their Niggunim, or wordless melodies that take flight with one’s soul. They are crafted to be listened to, and listened to again, and then taken with us as ours as we walk on our way. As Zusha has written on their site:

When songs are unbound by words they can be infinitely personalized and mean different things.

Words can do wonders, but sometimes there’s a need for simplicity.

Maybe one word. A line. No words. A breath.

How about just a smile.

Lets start from there.

Zusha arrives on the scene at just the right time. The world is thirsty to access the spiritual fruits that Zusha has to offer. Behold a group of true musicians grasping the Etz Chaim, the Tree of Life! Their music engenders a higher state of consciousness. Zusha transcends. Zusha delivers.

Moreover, they do not conceive of themselves as a Jewish act. As quoted in a fantastic piece in Tablet magazine, “they share a universal message of ecstatic and contemplative music outside particular religious definitions.” I have previously written in this blog about the emerging age that connects the particular and the universal. The times they are a–changin’. The emergence of a decidedly authentic group of powerful Jewish musicians producing universal music is a cause for great celebration.  Zusha will be immensely successful.

Elisha, Shlomo, and Zecharia, in the merit of the Rebbe Reb Zusha, Lchaim!

The Zusha EP can be purchased on iTunes.  Also check out www.zusha.com