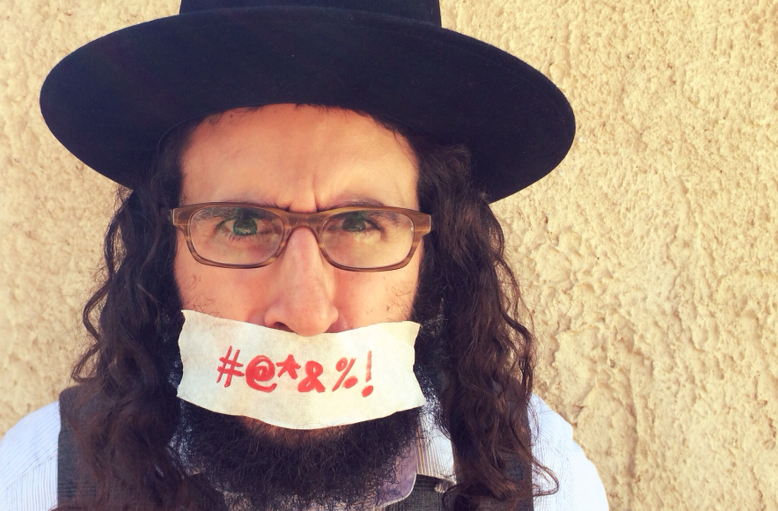 Religion is a Dirty Word

It’s not what you think.

If you came looking for that next NYT best seller about the devout Orthodox Jew renouncing his faith after embracing a new Divinity of underwater fire dancing, sorry to disappoint.

This is a different type of rebellion.

What is true, however, is that the words “God, and “Religion” make me nauseous. And “Orthodox”- don’t get me started.

Worry not, if you embrace the above notions, we can still be friends.

Yet to me, these invasive western constructs are sorely parched conceptual vessels, encompassing a mere residual schmeck of the potent spiritual elixir gushing forth from the wellsprings of a truly connected Neshama.

If God, Religion, and Orthodoxy, bother you, we are on the same page.

The Medium is the Message

The indigenous spiritual inheritance of the Jewish people was scripted in a language bearing the highest degree of sophistication.  It is the only native medium to be intimately woven into the primordial thoughts of the Developer on High.

It is through this “sanctified parlance” that transcendent Mosaic Wisdom was programmed onto the hard drives of individual Jewish souls, and into the neural networked server of our collective Tribal consciousness.

(Even when we, or previous generations try to delete it from our local drives, it remains preserved in all its Glory via The Cloud). Hebrew is a highly optimized linguistic tool, finely tuned with mathematical precision. Vivifying each Hebrew letter is its intrinsic inner integer.  Each word has a numerical identity.  The Torah thus reveals a vast codex of encrypted spiritual data.

This immensely expressive potency of Hebrew is only matched by its severe allergy to format conversion. Distortion, cacophony, dissonance unavoidably ensue.

The English word G O D is a Christian adaptation of the proto-Germanic word Gudan, meaning ‘that which is invoked’.  The English world R E L I G I O N stems from the latin religionem which means ‘reverence for the G-ds’.

Despite the slew of Pagan and Christian allegory that inevitably arise in conjunction with these terms, in contemporary times “God” and “Religion” remain one-dimensional phrases, bearing no intrinsic meaning.  Substituting for “Maude” and “ReLingonberry Pancakes,” would be suitable enough, were society to collectively acquiesce to their subjective redefinition.

Not so with Hebrew, where each of G-d’s divine names expressed in the Torah encompass a vast quantum wave of deeply embedded meaning, including a prodigious set of mathematical permutations iterating off each Divine expression.

To place these delicate spiritual notions expressed in Torah’s native language inside the heavy baggage-laden boxes of Germanic and Latin origin is tragic at best, if not outright cultural imperialism.

The Torah pre-dates these systems by at least 2,000 years and exponentially exceeds them in expressive complexity.

In lieu of God, Religion, and Orthodoxy, I hereby raise the following semiotic beacons as the most poignant English expressions I can find reflecting the ineffable spiritual truths that I embrace:

1.  That a Singular inexhaustible beam of cosmic radiance vivifies, envelops and permeates all matter, flesh; data, cells; neural dendrites, digital Exabytes; and the “empty” space where the lone tree in the forest fell.

2. That a higher dimensional hypercube of unified intelligence was holographically emblazoned onto a two dimensional scroll of Hebraicized parchment in a bliss-inducing display of sheer celestial elegance.

3. That twelve desert drifting tribes were eternally entrusted with this glistening other-worldly sentience, and charged with subtly seeding humanity with tendrils of enlightened ethical conduct, bearing the immanent fruits of universal re-unification.

In truth, no words can adequately express the supernal reality to which our beautiful Torah guides us.

The Kabbalists simply refer to the Source of all things as “Ein Sof,” No End.

If God, Religion, or Orthodoxy bother you as well, then great!  We now share a constructive space for meaningful dialogue.

As the great Rabbi Avraham Isaac Kook writes “Atheism has a temporary legitimacy for it is needed to purge away the aberrations that attached themselves to religious faith because of a deficiency in perception…  in the ruins wrought by atheism will the higher knowledge of Hashem erect her temple.”

Dawkins, delusion’s on you.