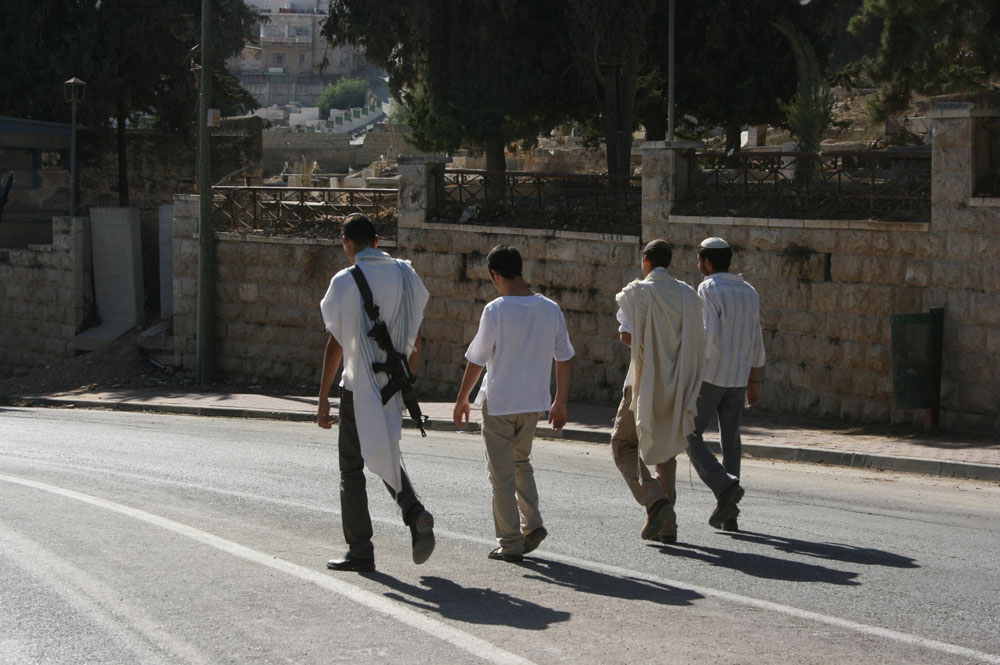 The Most Dangerous Shabbat Of My Life

The trepidation really begins before you hit the checkpoint. As you exit Highway 6 some 20 miles south of Haifa and begin heading inland, you start to feel a change of scenery. Cars with those ominous green license plates whizzing by to pass you on a narrow mountain road. Signs for towns like Barta, Um El-Kutuf, and Baka al’Garabiya. We really aren’t in Kansas any more Toto.

My wife said she would never do it. “It’s just too dangerous, not worth it,” she would exclaim. “I’ve got a one year old baby, how could I put her in such a dangerous situation?”

I didn’t blame her. Though I myself am a bit more rogue with my travels- having tripped around with my yamulka in Tunisia, hung with my peyos down with the merchants at the Istanbul Bazaar, and spent 3 months in the Otniel Yeshiva upon a fortified hill 20 minutes south of Hebron- this was the first time I confronted entering the proverbial danger zone as a father.

Our best friends had just moved to Mevo Dotan. According to Wikipedia, Mevo Dotan “is a communal village and an Israeli settlement in the northern Samarian hills part of the West Bank.”

The tension just oozes straight through. Once you pass the checkpoint with a brief nod from a few young soldiers, you are officially in PA jurisdiction, though the IDF maintains a robust presence. In the 10-minute drive towards the turnoff to Mevo Dotan, you come across several Israeli Army Vehicles posted up on the side of the road. This is a new instillation, in response to the various incidents of rock throwing at Israeli vehicles in recent weeks.

My wife’s decision to go to our friends for Shabbat was quite serendipitous. The army had just decided to install 4 full time soldiers in their tiny yeshuv. On Thursday before Shabbos, my wife’s friend finally convinced her that it was safe enough to go. We made our Thursday night preparations. We went to sleep. I then woke up to this headline: As we drove through a small Arab Hamlet on the way to our turnoff, we encountered an Arab man blocking the road. “Don’t slow down! everyone in the car screamed. I veered around him onto the opposite side of the road half ducking my head in angst of a pending attack.

This was, after all, just a week after famous Jerusalem personality Jeff Seidel was attacked on the Mount of Olives, the image of his shattered windshield stained into my brain. We proceeded forward and made the turn to Mevo Dotan.

Mevo Dotan sits at the top of a giant hill overlooking the Dotan Valley. This is where Yosef came to check out his brothers. This is where he was thrown in the pit- the Arabs have marked the place Jubb Yussef. As you drive up the steep hill towards Mevo Dotan, the first thing you encounter is its’ massive barbed wire motion sensitive fence. As we approached the fence, my friend in the back of the car motioned to me, turn here!

And thus we did, taking a small dirt road with a sign marked “Mevo Dotan Farm” alongside, and most importantly, outside, the security fence. We drove for 5 minutes, before continuing on the dirt road into a valley, before ascending again on the adjacent hill. We drove for another 5 minutes until we were on top of the hill and entered the 7 family “start-up” communal village outside of Mevo Dotan. More pertinently, outside the security fence of Mevo Dotan.

Now this was raw.

We passed 2 small trailers and a sheep pen before encountering my friend walking up the driveway to greet us.

“Dude, you are far nutzer than I ever would have thought.”

And thus we spent Shabbat as guests of the 7 family village atop a hill adjacent to Mevo Dotan. Combined with the 4 army soldiers posted to the community, we made a minyan of precisely 10 men for Kabbalat Shabbat.

It was beautiful. The 14 adults and 22 children that populate the Mevo Dotan Farm are holy. Super holy. They are honest, genuine, and compassionate human beings- just the type of people that make the world a better place. They cherish their home and their homeland. They have built a beautiful existence for themselves atop that hill, and my family and I had a splendid time. My daughter got to play with the sheep, I dunked myself in the ice-cold outdoor mikveh, and we all got to experience roughing it like pioneers. Or settlers.

Now I don’t like to get involved in Israeli politics. The situation between the Arabs and the Jews is complex

I’m not here to convince anyone of a viable policy in the disputed territories. Especially when I don’t have one myself. I am merely a person who is open to experience. A few years ago, I spent time in an Arab High School a mere 10-minute drive away talking to students and teachers. I now just spent a Shabbat with the handful of families encamped upon a rogue hill outside Mevo Dotan. All experiences contributed to the rich appreciation of life that I hold so dear in my heart.

And it’s this life that I treasure so dear that is unnerved after series of tragic events continue gripping the nape of the collective Israeli consciousness. Hit and runs at bus stops. Tractors. Stones. Terror.

I feel like I live such a privileged life in Israel, involved in incredible projects, surrounded by stupendous individuals, connected to the source of all life. “Behold, like a dream”

It’s experiences like driving out of Mevo Dotan Farm Saturday night, escorted by one tank in front of my car and one behind, that rattle me out of my privileged complacency and force me to confront life. Raw, uncensored, unfiltered life.