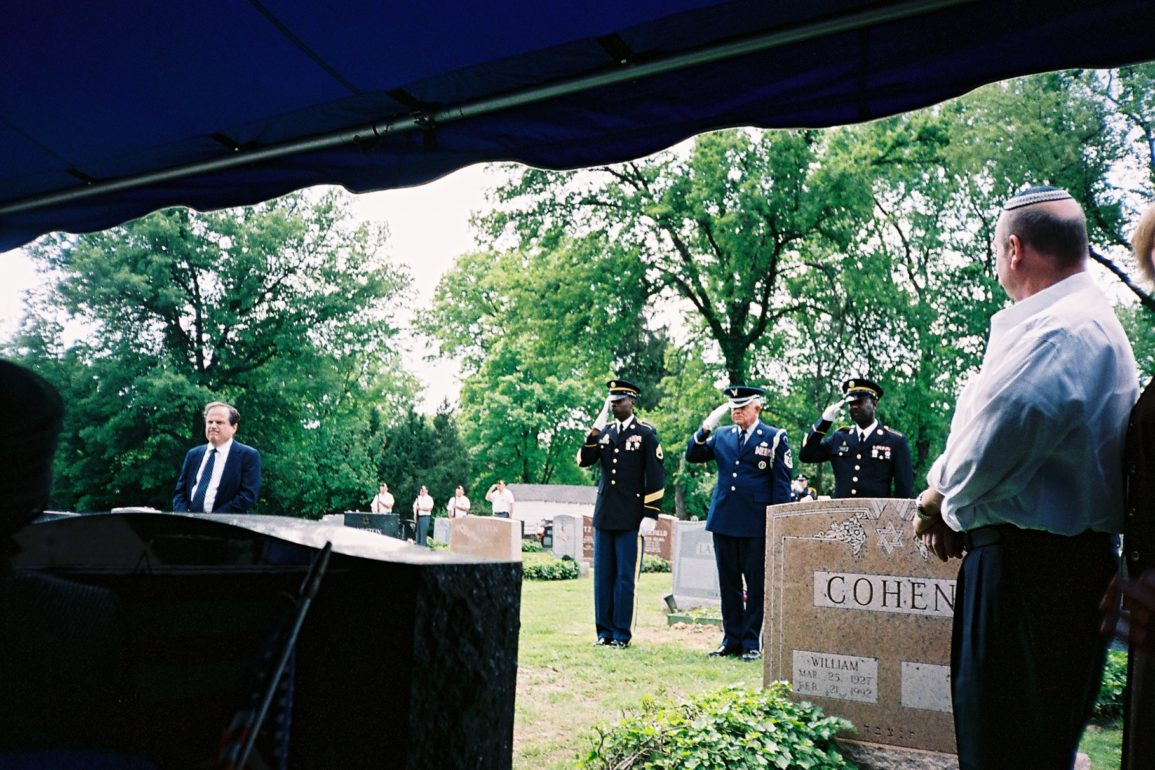 Why Don’t We Photograph Funerals?

I have pictures of my bar mitzvah. There are lots from my wedding. Somewhere, there is even a videotape of my birth that I regret having watched once. We cherish the markers in life that signal our progress and try to capture those moments for the future.

In my grandmother’s home, there is a hallway that is covered top to bottom in family photos dating back generations. You can look around and trace the progress from my great-grandfather first picking up photography in the early-20th century to my grandfather to my dad to me. Four generations who love images and the power they convey. The ever present camera became such a joke in my family that we have decades of pictures of people taking pictures of people.

My great-grandfather taught my dad everything he knew about photography including helping turn a basement bathroom into a professional darkroom. I was born one month after his passing, and inherited his name and creative spirit.

In film school, I tried to tie together this connection for a found-footage assignment. My dad digitized 8mm color film my great-grandfather and grandpa had shot of a family gathering in the 1950’s and I reimagined it with a humorous sinister overtone thanks to some editing and voice-over.

The Flag Taker Downer from Saul Sudin on Vimeo.

Editing can alter the emotion of a moment and fabricate a sense that was never intended, as I did here. The pictures we take in life are our own selective memory. When we look back at them they may be the key to unlocking a broader story, or we may simply be choosing to leave out so much of what matters. As a photographer and filmmaker, I strive for truth even in fabrication; your reaction of the above video may be positive or negative depending on the truths it unlocks for you.

This is why I dislike posed pictures. There is an inherent falseness in recording a moment where someone assumes an emotion for the photograph that was not in their heart or on their face a moment before. Candid photography means so much more. There is character. Spontaneity. There are accidents and happy accidents alike.

When I graduated film school, the first job I got was to make an anti-drug documentary. The parents of a teenager who had just died of an overdose were in shock and not sure what would become of it, but they had the forethought to have me start working right away. So they had me film the boy’s wake, funeral, and burial. I had never been to a wake before, but I’m sure it’s usually less awkward than when you show up with a camera and start filming people crying, getting close-ups of the open casket, and generally stand in the corner trying to be a fly on the wall.

A few people were noticeably uncomfortable with my presence and would approach the parents of the deceased to find out what I was doing there. But maybe it simply has to do with what you are used to. Would you look side-eyed at a wedding photographer? No, because we expect it.

One might wonder, “But why would you want to relive that?”

The truth is that it was thrilling to be there. These were some of the most real images I ever took. A funeral can be painful, sad, and difficult. It signals the end of a life, and forces us to face the limited time we have. It is just as powerful as a birth or wedding, if not more so. Whether it be in terms photographic, artistic or simply living life, the darkest darkness allows us to embrace the brightest light.

I imagine most people reading this may be thinking I’m a complete psycho now. But in my heart I truly believe in the power of images, and it’s a two way street that includes both our highs and lows. We are lying to ourselves through the exclusion of the ending to the greatest story we have.

For some reason the question I always get when addressing this topic is “Do you think we need to record EVERYTHING? Even seeing people on the toilet?”

The answer is no. I’m not advocating photographing our whole lot in life (though some technologies, like Google Glass or The Narrative Clip might suggest society thinks otherwise). We don’t have to focus on the corpse or even the casket. But it would be nice to have a record of the people.

A funeral is a special occasion. Friends and family gather to pay their respects. Oftentimes those who attend a funeral are as significant a benchmark of that person’s achievement as any who may attend happier festivities. In some occasions with an older crowd, it may be the last time the significant players of a generation gather as a group.

Ideally a funeral is a summation of a person’s highs and lows. My favorite recorded funeral is Jim Henson’s, for somewhat obvious reasons. The impact that Henson had on people the world over is immeasurable. The tribute to his legacy is emotional, meaningful, and ultimately uplifting. I watch this clip of his fellow performers singing his favorite songs on a regular basis.

When my grandfather passed away in 2008, my family was going through the biggest transition of my generation. I had been married just shy of a year. My sister was pregnant with her first child. My brother was engaged. My aunt was going through a divorce. The family we were in 2007 was significantly different than the one we would be by the end of 2008.

When I returned home and found out that my grandpa’s point and shoot camera had an unfinished roll of film in it, I decided a fitting tribute would be for me to finish it at his funeral. So before the service began we took a morose but meaningful family portrait. The brainwashing that we should smile in photos is so ingrained that the picture features an odd mix of people being honest and those attempting to hide their emotions for the sake of the camera.

When my brother and I gave a speech representing the grandchildren, I took a picture of the assembled crowd. I expected that to be the end of the roll. But it wasn’t.

We carried the casket out of the synagogue’s sanctuary, loaded it into the hearse, and as I stood there I noticed a group of preschool children playing on the playground out back. The entire scale of life’s journey came into focus. I took one more picture, of these happy children playing under a large green tree.

At the grave-site, military representatives saluted my veteran grandfather. I took one more snap.

The roll finished, and the electronic rewind mechanism kicked in, whirring audibly. We lowered my grandfather’s coffin into the ground.

Then, when it was done, it stopped.