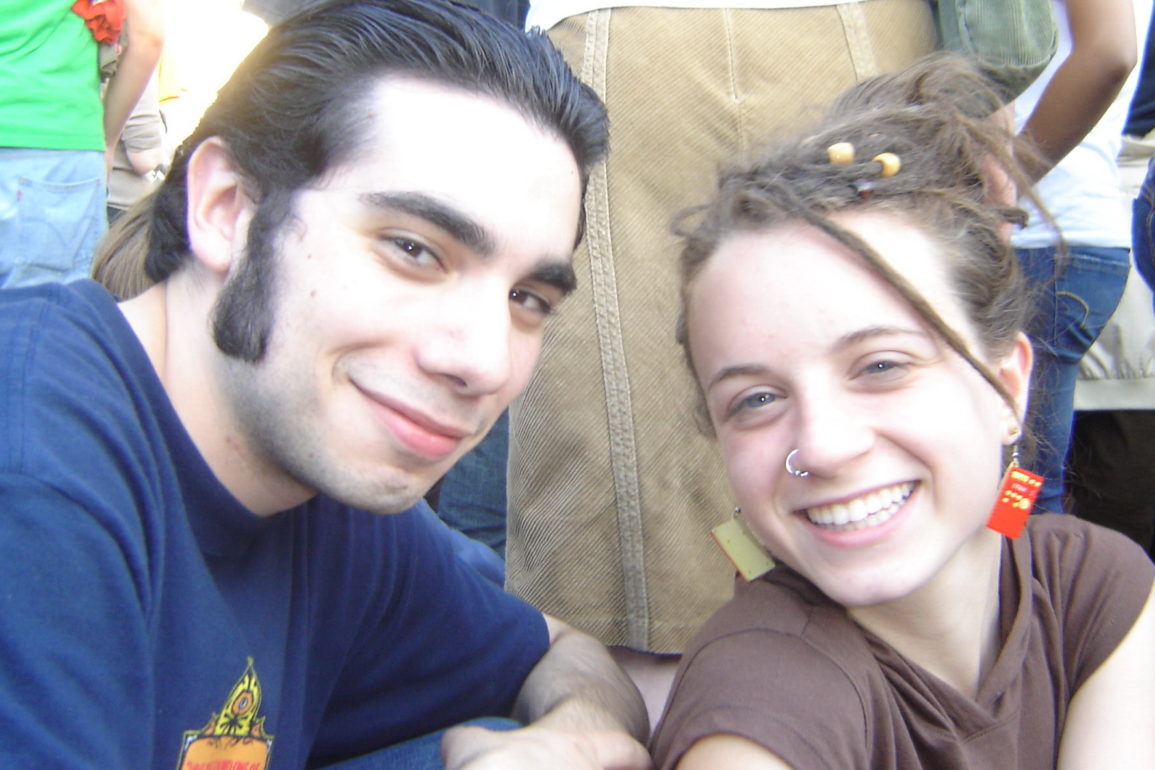 She Was Totally Wrong For Me So I Married Her

I was a senior in college when I met the woman I would eventually marry. But for the first six months we knew each other, we were casual friends with no real sparks. We met through the small Jewish group on campus, which I had been a member of since it started about two years earlier. Our first meeting was like this:

Her view: “Who is this guy in a long leather coat joking with the Rabbi talking about movies like they are old friends? …Whoa, sushi! I’m hungry!”

My view: “There are a bunch of Jewish freshman girls. This is interesting… Who is this beanpole hippie 17 year old with dreadlocks? She’s such an airhead.”

Later that week at Shabbat dinner we started talking about music. She told me her favorite band was Glaswegian pop-rockers Belle & Sebastian. I told her I was going to the Across the Narrows concert with some friends; an awesome festival where Beck, Belle & Sebastian, The Polyphonic Spree, and more all were performing. She wanted to go but didn’t know anyone who was. So she took some birthday money from turning 18, bought a ticket and joined us.

From then on I knew she was cool (though so, so very ditzy- and way too young). We would see each other twice a week at the Jewish Student Union events and chat. She started hanging out with my friends. But we were so very different. I treasured my movie and music knowledge and she had hardly heard of anything! She never got my references which were always before her time and she didn’t think my jokes were funny.

But I had an apartment off campus and had a kitchen, so she came over to make matzo balls, something that we both grew up making with our moms. I lived with two women (that’s a whole other story) but they were just friends. She had a boyfriend in another town, and he even came and visited a couple times. She felt that I should have someone in my life too, and would tell me about a friend of hers she wanted to set me up with. In her eyes, we were a good match; both intellectual and reserved, we could be quiet and read books together. On the page, that sounded great. But it never materialized because this girl was in another state, and besides, I had a “type”.

Green eyed Middle Eastern girls, with olive skin and dark hair. They drove me up the wall. I could imagine finally embracing my miniscule Sephardic heritage and abandoning the Ashkenazi-heavy Judaism that had been choked down my throat since I was a kid. I was middle western, this could totally work. Why would I be interested in a brown haired, pale New Englander?

Over the course of the semester I halfheartedly tried to ask out one of the other Jewish freshman girls, who turned me down. That winter I went home trying to figure out my feelings on the whole situation. I hooked up with a girl over the break that some friends in Chicago set me up with. It felt kind of disingenuous because in some ways it was a retread of the last relationship I was in. That one turned sour from a fling that wouldn’t evolve beyond momentary fun. And that hurt me in the long run, when I realized she didn’t care for me as much as I did for her.

When I told the woman I would eventually marry what happened over the break, she was so happy. Apparently my success or lack thereof with ladies was something she had invested in. I returned to New York and she didn’t have anyone to hang out with until school started again, so she joined my friends in our adventures. After that, we formed a close knit group, mixing my friends with our growing Jewish campus circle. We stole a standee for a terrible movie from a theater, ran around the Statue of Liberty like madmen, and I snuck her into CBGB’s. Normal college stuff.

We would walk home back to campus from Shabbat dinners and talk a lot. We got to know each other better and I began to see past my initial impression of her. We had a lot in common, in terms of our upbringing, and outlook on life. Our dark humor and openness to begin a path to combining art with religion. She wasn’t the girl I thought I wanted, but I enjoyed being around her so much. One day someone who had seen us together asked me why I didn’t ask her out. “She has a boyfriend,” I replied. He told me that it didn’t matter and that she was obviously into me. Everyone told me the same thing.

In February, I finally talked with her about it. She felt the same way, and decided that she would take some time to figure things out. Valentine’s Day was her decision day. And for some reason, she chose me.

It was awkward and messy at first when she broke things off with her long distance boyfriend. But we spent so much time together at that point it just felt natural to take that step no matter the consequences. We were friends first and just expanded that part of our lives to include one another on a deeper level.

We’re still together and this fall will celebrate 10 years since we met.

In life, sometimes you encounter something you aren’t ready for. It’s all wrong, you will tell yourself, and write it off. You have a “type” or an expectation. If we had gone through some religious dating system where we had to be matched up by a matchmaker or had to go on an official “date” to get to know each other the relationship would have ended before it began (I’m still not sure we have ever been on a date). But because we weren’t interested in each other, we had the freedom to just kind of orbit one another until the cosmic collision took place. Give things a chance and they might change your life forever.