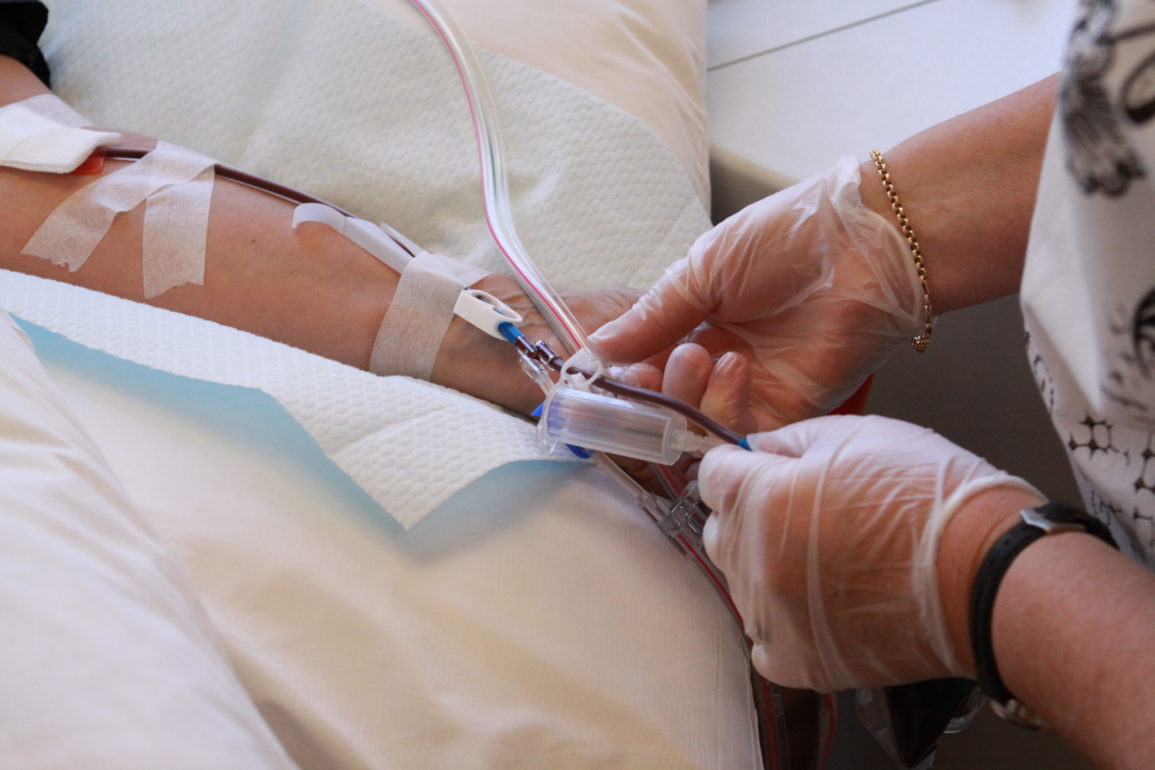 I May Have Saved Your Life While Saving My Own

I always look down to see the needle enter my arm, so that I can better understand the frailty of life. It stings a little as it goes in, but the pain is worth it. I begin to bleed, and it feels good. The tubes running down fill up with crimson and I squeeze harder to release more. My life essence is leaving my body. I am happy.

Afterwards I get a green arm band and some apple juice.

I have been donating blood regularly since I was 18 years old. That’s almost half my life and I’d wager that in that time I have given around 4 gallons of blood. Eighteen was an important age to discover my comfort with the thin veil between life and death. But for years before that, I was preparing mentally.

Like any good deed, there are specific phases and stages to it. There was the legacy- my father would donate blood often when I was a teenager, and showed me that it was safe. There was the reason I had the opportunity- I would tag along on Sunday mornings with him to gain quality time and work out at the JCC health club. There was the cheap motivation to participate- a free bagel breakfast only for participants. Then there was the higher knowledge- I didn’t have many rituals to share with my dad but I understood that the annoyance of a misplaced needle or bruised arm was worth the life that he was giving to unknown numbers of people.

The first time I donated was in that multipurpose room, done up with cots and hanging bags of blood like an improvised hospital on the front lines of a war, sitting next to my dad. And like any good deed when you are comfortable with it, you can find ways to make it happen no matter where you are. I donated when I was in Yeshiva in Israel. I donated when I went to college. And I continued, first for incentives like tickets to movies or baseball games when I couldn’t afford them, and then later just because I liked it.

There is a tradition in Judaism that one who has a blood lust should become a shochet (ritual slaughterer). I suppose that while I am not specifically interested in seeing someone else die, I often strive to come to terms with my own death. As a teen, filled with suicidal thoughts and depression, blood donation became a positive outlet for me. I could help people and in the process sort the balance of life and death within my own twisted mind. I didn’t need to cut myself when there were other people to do it for me and praise me for it.

After I quit anti-depressants and made inroads on regaining my emotions, seeing the blood flow out of me became a “korban”, a sacrifice that allowed me to face my own mortality and make a change. We used to have Kohanim (priests) and a Holy Temple for this; now I have nurses and a bloodmobile. The reclining chair is my altar, and the bag, swinging back and forth filling with my blood moves like the hand of a Kohen (hopefully not sprinkling the blood everywhere…this metaphor might be falling apart). I leave changed. I eat a cookie. My body recovers and regenerates.

When I don’t donate for a while, it affects me. I miss it. Then the calls and emails come from the blood center, which is in my phone as “The Vampires”, reminding me that it’s time for me to return and help out. “I vant to suck your blood!” They say, in my imagination.

I have no idea how far my blood reaches; It’s a little like giving away a child and having no adoption records. I’m a universal donor so I imagine lots of people secretly have a bit of me in them. I guess I could pursue it but I wouldn’t know what to say.

“How’s that blood treating you? Pretty great? I made it, no big deal. It’s just life incarnate.”

Photo by the Canadian Blood Services