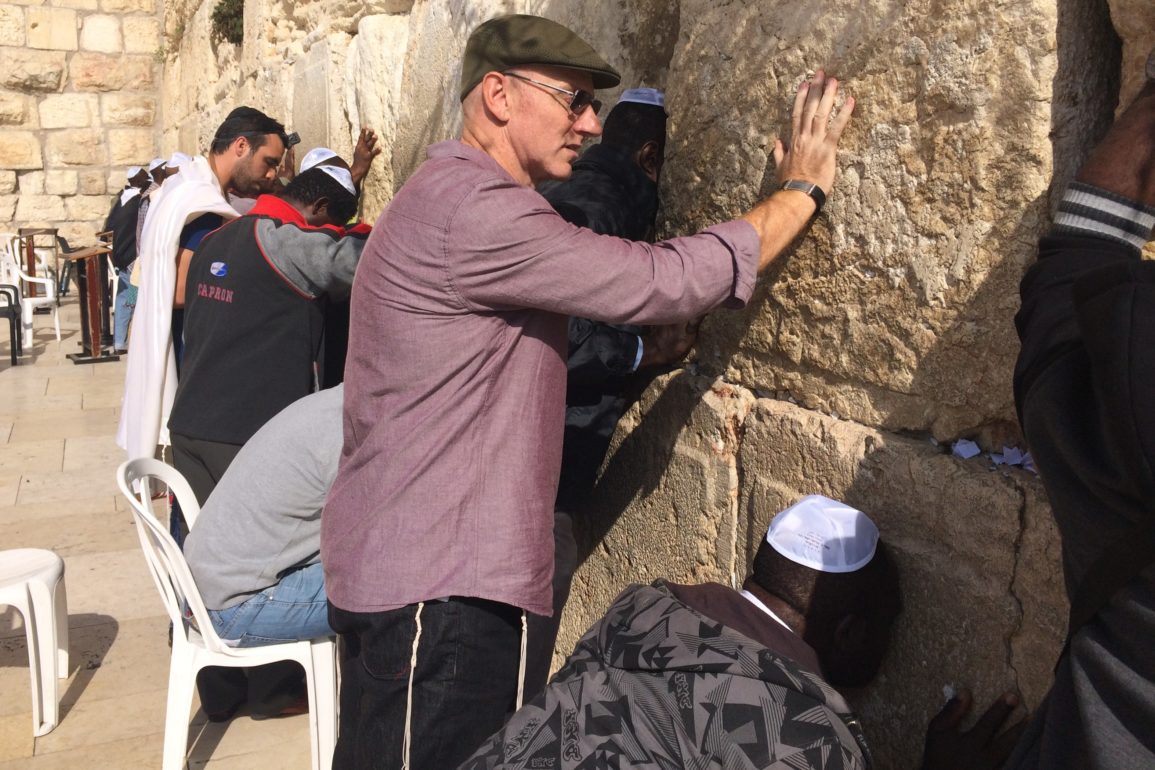 The Perils Of Public Jewishness

Since returning from Israel, I’ve been wearing my tzitzit, or ritual fringes, in a visible fashion most of the time. They don’t have to be worn that way, particularly when there is danger of anti-Semitism, but the knotted strings are meant to be a visible reminder of the blessings and commandments G-d has bestowed on me. I feel closer to G-d when I can see them.

Of course, this means other people can see them too, and I thus become a public Jew.

This is good when it causes me to hold myself to a high standard, i.e. when I “represent,” but it’s a problem if I slip.

When I first reconnected with Judaism 17 years ago, I learned about tzitzit and let them fly. I shudder when I recall some of the things I did, and the places I ate, while flying that flag. I was both enthusiastic and ignorant – a dangerous combination.

Here’s a piece Nina and I wrote 13 years ago, but never published. I thought of it yesterday when I jaywalked without thinking. I pray I’m a little bit more mature now about the meaning of the tzitzit, and the implications of public Jewishness.

Around a festive Shabbat table sit three people: SAL, whose gesticulating hands have been known to knock over a kiddush cup, NINA, a warm hostess with a quick laugh, and YOU.

YOU: You wanted to get my take on something that happened?

SAL: Yes. It all started when we saw a notice in the Jewish Journal about an upcoming show at the Conga Room, featuring The Hip Hop Hoodios, who’d been labeled the most important Latino Jewish rap act ever by the Rolling Stones.

SAL: That’s what I said. Anyway, the article said there’d be a $20 cover, but only $12 if you have a pass. I didn’t have a pass, so we started talking to these guys on line-

NINA: Aren’t you going to mention you were wearing a yarmulke (skullcap) and fringes?

SAL: Oh yeah, this was a first. I’ve been wearing tzitzit and a straw fedora for about six months, so for people who know what fringes are, I’m visibly Jewish-

NINA: But most people don’t notice fringes. Step outside in a yarmulke and it’s like wearing a neon sign.

SAL: Which I thought about as we walked up a side street toward the club. People have gotten jumped for less. OK, we’re on line at the Conga Room behind these two guys, and we can see that they’re carrying passes, which are actually just pieces of paper they printed off the Internet. So we ask if we can go in with them.

NINA: And I’m thinking, this is never going to work because I’m sure it’s one pass per person.

NINA: Jew finagles with strangers to save eight bucks.

NINA: Finally we reach the ticket woman and he says, “We’re all together. We’ve got two passes for four people.”

SAL: She says, “No.” He argues, “These are printouts from the Internet! We could just go down to Kinko’s and copy them!”

NINA: Meanwhile, there’s a long line of people behind us.

SAL: Right, there’s at least 25 people back there and our pal won’t drop it. She won’t budge, so I say, “Forget it, we’ll just pay.” But my compadre says, “Hang on, I’m gonna get more passes.”

NINA: While we were on line, we learned his guitar student fronts the band, so he feels like our host now. And to prove he’s serious, he leaves his buddy with us. Holding our money by the way, because we had already given him the 12 dollars. So we wait about 10 minutes, and we’re talking to a couple of salsa dancers…

SAL: Who’ve now heard about the passes and they’re disappointed they didn’t visit the website either. Finally, these dancers are in the middle of paying with a credit card, when our pal comes out with a huge stack of passes.

NINA: And he starts handing them out to everybody on line!

SAL: He even gets hostile about it when one woman says she doesn’t want a pass. “Fine, pay full price, Miss Ritchie Rich!” He’s militant cause it’s Cesar Chavez day, and he went to a rally that morning, and his attitude is, “Fight the people!”

NINA: Don’t you mean, “Fight for the people”?

SAL: No, I mean, “Fight the power!” Anyway, he’s very political. Thrilled to fight the power by handing out fliers so the people would get in cheaper. And then he disappears into the club.

NINA: We’re still waiting for the salsa girls to finish charging their tickets, but now they want to void the transaction and pay $12 because they have passes. The ticket woman refuses.

SAL: People are getting impatient.  We’ve got our passes and cash in hand, but the ticket woman’s boss comes out and says they’re false, so my compadre’s buddy becomes indignant, everything’s escalating…and then an angry guy in a suit comes out of the club, looks right at me, and beckons with his finger.

SAL: I get pulled out of line, like the kid who stole the milk money. I have to walk over to him so he can say, “I heard you got one of those passes, went down to Kinko’s, made a bunch of copies, and handed them out.”

NINA: “Went down to Kinko’s?! There are 40 witnesses to testify that Sal was here the whole time!”

SAL:  So I bring him over to the line and everybody agrees that I was not the guy handing out passes. I look at him and say, “Well?” He apologizes.

NINA: But what we don’t know is that this mysterious guy isn’t from the club.

SAL: He’s promoting this show as a Jewish singles event.

NINA: So he’s at the Conga room, having his big night there, rushing around, making sure everything’s running smoothly, and somebody from the club tells him a guy in a yarmulke is out there handing out flyers, ripping off the club. What a nightmare for him: a Jew causing problems.

SAL: I wasn’t causing problems. I was just seeing if we could get a pass. And I offered to pay the $20 when it looked like we might not.

NINA: But the Klutz guy was thinking he’d be blamed, no more nights at the Conga room. You went out with a yarmulke because you wanted to represent, and instead you caused a huge commotion, embarrassed the promoter, held up everybody on line, and all because you didn’t want to pay $8 extra for the ticket. You fell right into every stereotype about Jews: cheap, wily, angling for special treatment….

SAL: After the Klutz guy heard the whole story, he wasn’t mad.

NINA: But he was embarrassed.

SAL: It all blew over, everyone had a good time, and we made friends with my compadre and the Klutz guy. (Sal turns to you.) So, am I guilty? Am I evil? Have I done wrong?

NINA: You shouldn’t ask our guest to judge you.

SAL: Why not? We just told the whole story. What do you think? Did I do something wrong?