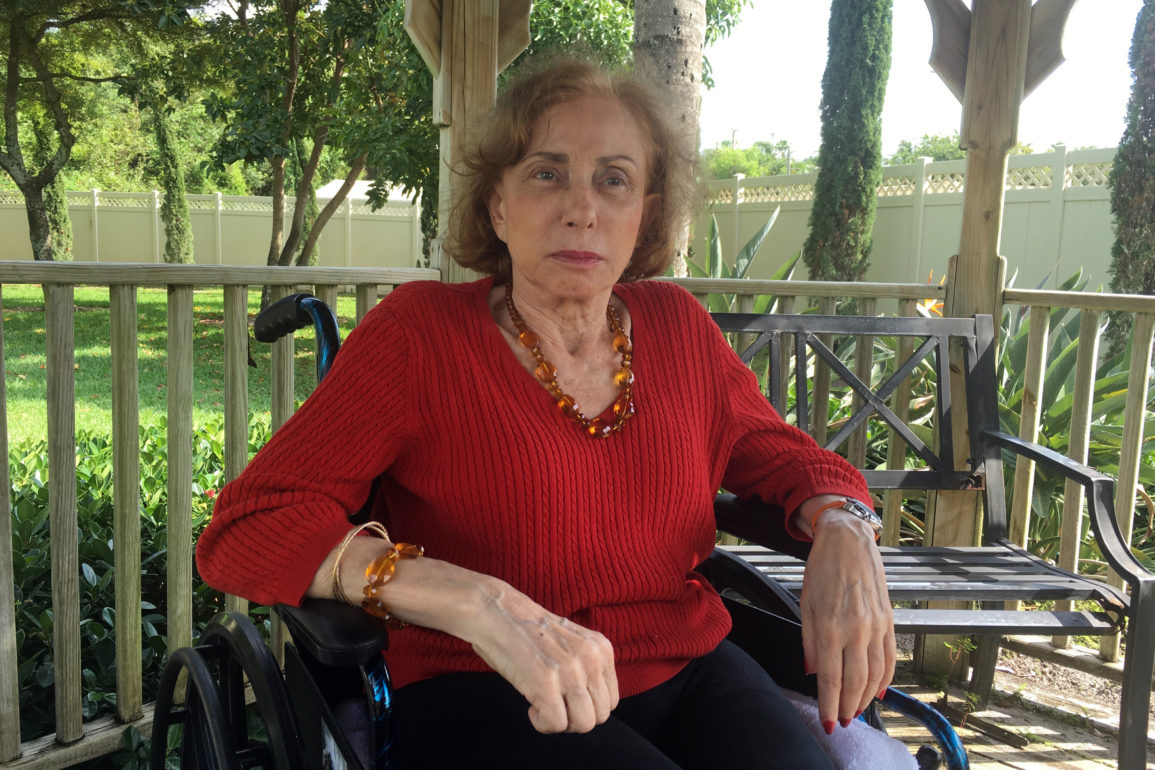 Could Mom’s Dementia Be An Extended Near-Death Experience?

It’s been a year and a half since I first shared that my mom has frontotemporal dementia. At the time, I found comfort in in the words of two rabbis, one ancient and one modern. I learned to stop looking for what was missing in Mom, and started seeing the person before me: a woman whose few words remained kind, and who brought out kindness in others. (See: Mom Has Dementia And Other Good News)

Since then, there have been a few changes. She fell again last year, and broke her second hip. Eventually she regained the ability to walk, but only for a few minutes a day with a walker.

She lives in a memory care facility with 63 other residents. The place has a family feel. Dad visits her every day, and feels very connected to the other spouses and children who do the same. The caretakers are mostly Jamaican, and mostly amazing. They treat the residents like family, and remain patient even when tantrums occur.

Mom doesn’t throw tantrums. She’s mostly in good or neutral spirits. She gets excited every time Dad arrives, and also when my brother and I fly in for a visit. We love that she still recognizes us, and that she’s equally excited to see us on each subsequent day of the visit.

It’s toughest on Dad. He’s always been a strong man, a no-nonsense provider with exacting standards. He married Mom when he was 21 and she was 20. Mom never backed down from a challenge in her life, including his thorny nature. They were best friends and lovers for 50 years, and the relationship that defined his life is no longer there.

Dad can’t look past what she’s missing. Every time she puts a few simple words together in a natural way, it seems the love of his life is back. And then she goes blank. It breaks his heart again and again.

When I visit, it’s a little different. I miss the Mom I knew, but I haven’t lived at home in many years. I actually miss her more when I’m driving around LA and I want to share a story that would make her laugh. I reach for the speed dial button, and realize she no longer has a phone.

When I’m with her, I focus on Mom as she is now. She’s still kind. She manages to say “hello,” “yes,” and “no” pretty often. Her answers are usually not responsive to the well-meaning questions Dad and others put to her: “Are you happy? Would you like to go outside? Is this nice man your son? Isn’t it a nice day?” Her answers are guesses, but she’s always kind, and she makes people smile.

I don’t ask her questions. I make a few cheery statements for the benefit of others, doing my part to keep the mood up, but I greatly prefer wheeling her outside away from the TV, the upbeat hellos, the guy repeating his wife’s name over and over and over.

We sit in the gazebo. I hold her hand, and I watch her. I can’t possibly know what’s going on inside her mind, but I’ve seen expressions just like hers in a totally different context…

I’ve always been a seeker. In my youth, I experimented with hallucinogens like LSD and psilocybin. I didn’t do it for a laugh. I felt like an explorer. I compared my experiences with those of Aldous Huxley, John Lilly, Carlos Castaneda, and others who reported their journeys in detail. It’s amazing how similar these accounts all are despite the use of vastly different substances in completely different situations.

Even more striking is the similarity between these encounters and the countless descriptions of near-death experiences (NDE’s). There are hundreds of books on this subject, but the one that stands out for me is Dr. Eben Alexander’s Proof Of Heaven, in which the author relates his own NDE from his perspective as a leading neurosurgeon.

Not only was Dr. Alexander’s encounter with the spiritual realm consistent with everyone else’s, but the particular circumstances of his NDE made it impossible for the experience to be housed in the workings of his brain. His brain was literally dead and non-functional at the time. For him to have experienced anything at all, his consciousness had to reside outside of his brain.

From this body of literature, I gather that our physical universe exists within a spiritual matrix that is as real as the world we see, hear, and feel. When we die or approach death; when we pierce the veil via religious experience or consumption of entheogenic substances; we are actually perceiving a realm in which the laws of time, space, and communication as we know them do not apply.

People who’ve experienced these altered states uniformly report sensations of connectedness, profound love, and kaleidoscopic light among other common elements. I can attest to this from my own shared-death experience.

They also report that is nearly impossible to capture these elements in language, or even to process everything that happened because that other upper realm is so different.

Dr. Alexander and others in his field suggest that the brain may not create consciousness as we normally understand it, but rather allow our consciousness to function in the physical world by limiting input from the upper realm.

In other words, one cannot drive the kids’ carpool while experiencing a profound oneness with the universe, so the brain acts as a filter on that infinite stimulus. It breaks our connection with the upper realm so we can talk, eat, walk, shop, drive, etc. in this world.

I mention all of this because when I look at Mom, I find myself wondering if she’s half way there. Scientists are starting to explore what’s actually going on in the brain when people consume psychedelics. It turns out that these substances may actually shut down parts of the brain rather than stimulate them. If that’s true, then it’s also possible that a condition like frontotemporal dementia – which progressively shuts down areas of the brain responsible for personality, behavior, and language – could do the same.

Mom could be half way to that higher world, like someone who is having a mystical experience or an NDE. The difference would be that her altered state began gradually, and never stops.

If I imagine myself in that situation, I would behave just like she does. I’d have tremendous difficulty focusing on what’s happening in the physical world. I’d gradually lose interest in it. I’d especially lose interest in mundane things like eating, chatting, dressing, cleaning, etc.

And I’d probably grow annoyed if people wanted to me to focus on those things.

It would also be a tiring experience. I’d try to reduce my activity, and especially curtail interaction with people, so that I could focus on what I’m doing in the spiritual world. Under these circumstances, Mom’s continuing kindness in the physical world would be a heroic achievement, fueled by her love of people.

What is Mom doing in the spiritual world? I have no idea, but perhaps it’s something important. Perhaps she’s on some kind of mission. Maybe she has work to do before she transitions permanently out of this world.

Why would God arrange things this way? Why would God create the possibility that some of us face this long, long transition, while others perish in an instant?

What I choose to believe, however, is that Mom is accomplishing something. It’s not meant to be put into words. It’s not meant for us to understand, at least not now. But it may have real consequences on both sides of the veil.

I don’t expect Dad or anyone else to see it my way, and I can not know if I’m right.

I pray, however, for Mom’s strength in accomplishing her mission, and I feel closer to her when I do that.