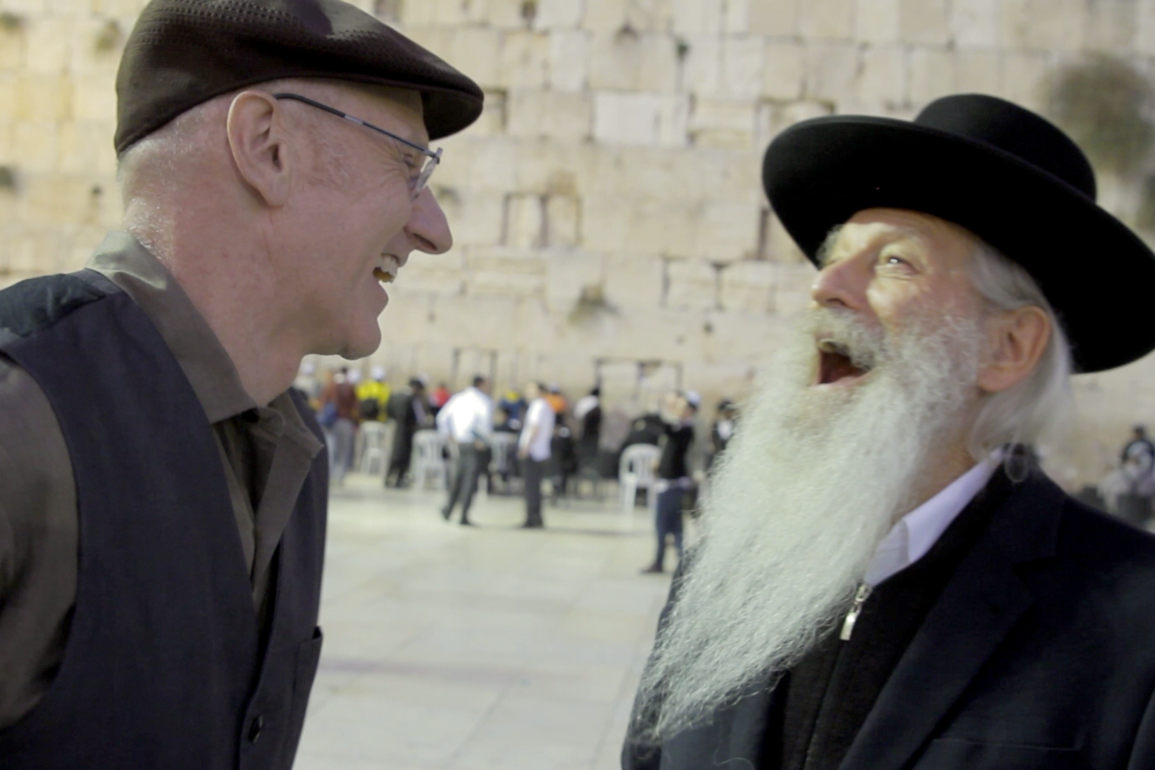 Getting High In The Holiest Place On Earth

Israel in general, and Jerusalem in particular, is a tangibly holy place. During my recent journey, I connected with its spiritual energy everywhere I went, and I was changed by it.

I believe I was fortunate in this regard because I was a man on a mission, and my mission bound me to amazing people.

The first half of my quest was a men’s trip organized by Aish and JWRP – a kind of Birthright for Dads. I’ve been strongly connected with Judaism for 17 years, and I even visited Israel during that time. This trip was different.

Along with 135 other guys, I drilled like a fresh recruit at an army base, immersed in the mikveh (ritual bath) of the Ari z’l (a great kabbalist), prayed at the tomb of Rabbi Yochanan ben Zakkai, hiked up Masada, rappelled down a cliff, and danced with hundreds of soldiers at the Kotel (the Western Wall).

Many of us have kids the same age as the soldiers. All of us were that age once. In America, that’s a time for college and keg parties. In Israel, it’s a time to defend what we hold most dear. We often reflected on the value of a land that our collective family must defend with our children’s lives. It’s not just real estate. Warriors on the beach at the Dead Sea. That’s me in back.

Jerusalem and Israel are holy because we have drawn closer to G-d and each other there for millennia. My journey even brought me closer to my own family, though they were thousands of miles away in LA.

That feeling of holiness created a demonstrable change in my thoughts, speech and deeds – a change that has continued since my return.

And that was just the first half of the trip.

During the second half, I filmed conversations with contemporary Sages for a TV show based on my work as the Accidental Talmudist. The footage exceeded my wildest hopes. We plumbed mysteries great and small, while walking through deserts, rain-soaked alleys, ancient cemeteries, and disputed valleys. Much more to come on this in future posts… I had an unforgettable talk with Rabbi David Aaron, author of The Secret Life of God

Meanwhile, I continued my daily posts to the Accidental Talmudist community, which now includes over 150,000 people in 50 countries. I add new content daily, and I didn’t want to stop during my trip. Because I was so busy, however, I simply shared phone pics with brief updates. To my surprise, the community loved it and called for more. I became the eyes and ears of a huge collective odyssey, and I felt everything more keenly with this expanded soul.

When I first reached the Kotel, I posted, “One of the things I prayed for here was that our community will help spread G-d’s light. Add your prayers in the comments and I will read them at the Wall, b’H (with G-d’s help).” I had to return again and again to get them all done.  The prayers were profoundly moving. You can read them all at the original post. Common themes included prayers for peace in Israel and Africa, the blessing of children, healing of loved ones, unity among Jews, and the coming of Moshiach (Messiah) now!

Very few people prayed for themselves.

– Please pray to save the bees and ultimately, our world.
– Please Pray for all the souls of all people who have died and do not have anyone who pray for them.
– My 5 boys-sober up and find G-d!!!
– Big Brother please prayer for me and my family. All countries prayer for Pakistani Peoples.
– I ask you humbly Mr. Litvak to pray that I become consistent and faithful in my journey toward conversion
– Please pray that I won’t be a burden on my family anymore, by finally receiving my Social Security Disability Insurance, which stopped June 2010 because of Identity Theft.
– My prayer is to lay my head down in Israel to sleep, to wake again in Israel, and to pray at this Wall. Baruch HaShem that you are able to be there, praying for all of us.
– That the Wailing Wall will one day be known as the Wall of Joy.

I am profoundly grateful to everyone who entrusted me with their prayers. It was an honor, and it brought me closer to hundreds of people in our AT community.

A very special soul, and one of the Sages I spoke with on camera, was Rabbi Shlomo Katz. In the name of Reb Shlomo Carlebach, he explained the difference between a physical high and a spiritual high:

“When you fly on an airplane, you get very high – 35,000 feet. To get there, however, you have to leave everyone else behind. A spiritual high is just the opposite. The higher you get, the closer you come to your fellow souls.”