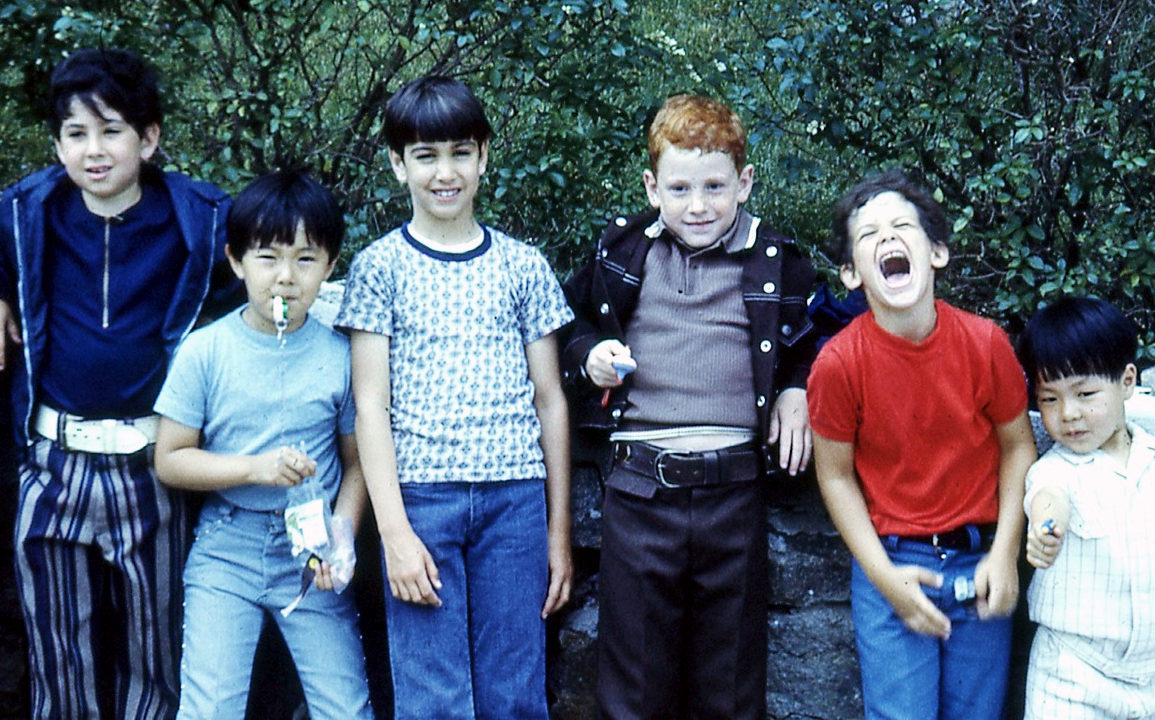 Can You Spot The Latino?

I’m pretty sure I was the only redhead at the NYU Latino Law Students Association Gala in the spring of 1990. The food was delicious, my date looked stunning, and I was glad I had jumped on the opportunity when I received the LALSA invitation.

My journey to that moment began 25 years earlier. I was born in Santiago, Chile in 1965: a third generation Chilean on my father’s side (whose people came from Odessa), and first generation on my mother’s side, who arrived when she was 12 from Hungary.

We left Chile in 1970 after the election of socialist president Salvador Allende. For Mom, socialism was close enough to the Soviet regime she’d fled in Hungary.

I started kindergarten at P.S. 81 in the Bronx. With a curly mop of flaming red hair and speaking only Spanish, I immediately embarked on a lifelong career of not fitting in. I learned English fast, but I still felt like an outsider. I got into X-Men comics because I identified with the mutants.

When we moved to the suburbs in 1973, I got a big idea. Instead of being the only red-headed Salvador anyone had ever met, I would seize control of my destiny.

My middle name is Alejandro – Alexander in English. When Mrs. Peltz called attendance, I informed her that I go by Alex and she made a note in her book. Simple as that, I molted my Latino heritage and became Alex Litvak of Rockland County, NY.

The following year, Mrs. Carol called Salvador Litvak on the first day of class, and I told her I go by Alex. No one batted an eye, but deep down I felt a slight twinge of cowardice.

A moment’s reflection was enough to bury the thought. Elementary school is no place for misfits. I was still too tall, too redheaded, too freckled, too incompetent at sports involving balls, too unconfident around popular kids – especially girls – to be saddled with a name like Salvador. And God forbid someone should find out what the name really means. A Jewish kid named Savior? Who needs that? Even my family was calling me Alex.

Year after year, on the first day of school a teacher would look for a Salvador and find an Alex. Year after year, I would bury that twinge of shame. After a while, I felt like I didn’t even have a choice – I was too established as Alex. My friends would never accept me as Salvador. And I had bigger fish to fry anyway.

We had arrived in the U.S. when I was 5. My parents immediately proclaimed that I was capable of going to Harvard and becoming a doctor. And anyone capable of fulfilling such a destiny would obviously desire it. Their plan became my plan.

They were right about my ability to get good grades. I liked getting good grades. When my friends starting smoking pot in junior high, I held back until I was sure I could light up and still get the grades. I never toked at school like they did, and never before completing my homework. What a good kid.

In fact, smoking pot got me into Harvard. When my best friend’s older brother ratted us out in 8th grade, his dad told my dad. My friend got slapped around and grounded. My dad is pretty old school, so I expected even more painful discipline.

When Dad got home, however, he had a new pair of Nike running shoes with him. He said, “You’re lucky I had time to think about this, or you’d be in the hospital. You obviously have too much time on your hands. You are now a runner. Start a journal, keep track of your runs. I want you up to three miles a day in three weeks.”

Dad was into running then. He soon got into cycling, and I asked if I could switch my routine from running to biking. He agreed. I liked cycling right away. It was exhilarating for a 13-year-old to ride miles away from home. My stamina and skills increased, and we heard about a bike race at Rockland Lake. I competed and won!

Dad became my coach and mechanic. Every weekend we drove for hours so I could race. Mostly I was too tall, too slow, too intimidated to shove my way into a shoulder-to-shoulder peloton of 50 riders. But I kept at it, and eventually became the New York State Track Champion .

You need a great extracurricular activity to get into Harvard, and I had one. The grades helped, but my unique journey from stoner to cyclist got me into the college of our dreams. I did not apply as a Latino.

At Harvard, I could’ve changed my name back to Salvador. When my first professor called attendance, however, I automatically said, “I go by Alex.” It was inertia. The twinge didn’t last more than a split second.

Halfway through my second year I switched from Biochem to English Lit, and from pre-med to pre-law. I’ve always loved science and still do, but I found myself more interested in studying Shakespeare with the best professors in the world. My creative side had started to awaken.

Pre-law is not easy of course, and my mediocre Biochem grades did not help. I aced my English courses, but I was afraid I didn’t have the overall grades for a top law school. When it came time to apply, I checked the Latino box.

I didn’t get into Harvard Law School, thank God. Instead I went to NYU Law and moved into one of the great artistic centers of the world, Greenwich Village. I quickly ascertained that an NYU Law degree is gold for New York law firms, so high grades would not be required. All I had to do was pass.

Because I had checked the Latino box, I got invited to Latino Law Students Association meetings and activities, but the LALSA bulletins, announcements, and invitations were junk mail to me.

I began to sense that lawyering was also not for me. I was more interested in creative pursuits. I filled journals with my explorations, performed at poetry readings, got into crazed situations in after-hours New York.

I actually forgot that I had registered for a corporate tax class in my third year, and realized it on the day of the exam. My roommate Dave explained corporate tax to me over breakfast.

I looked at the exam and turned red. I didn’t know a single answer. I left the building, walked around the corner and bought a beer in a Korean deli. I returned to the exam room, and popped the top. Everyone looked at me like, WTF??

I wrote what I knew, principles gleaned from corporate law, contracts, and basic tax. I got a B-minus. My pals loved that there was one guy at school who just didn’t give a sh*t and got away with it.

I did care about creating something. The poetry readings turned into performance art. I got reviews of “interesting.” It seemed unlikely to pay the bills, so I started writing a novel and accepted a job in mergers and acquisitions at Skadden Arps, the biggest, richest firm in town.

Graduation approached, and I noticed a fancy envelope in the mail pile. It was from LALSA so I was about to throw it away when its weight and texture made me curious. I found an invitation to a black tie gala at a prominent hotel.

“Nice!” I thought. I hadn’t worn my tux since college, and I could bring a date. I invited Joanne Schwartz, and we had fun dressing up.

We took our seats in a magnificent ballroom, with big centerpieces on the tables, unlimited booze, and a five-course dinner. What a score!

Joanne and I were lost in our own little world when the speeches began. A Latino judge and NYU grad talked about his struggles during every step of his illustrious career. The current president of LALSA talked about what this moment meant to her, and thanked everyone who worked so hard on the gala.

Then she called up one of our classmates to receive a gift from LALSA. He gave a moving speech about being the first person in his family to graduate from college, let alone law school.

Another classmate was called up, and she gave a speech about her parents and the sacrifices they had made so that she could enter the world as an attorney. She pledged to fight for civil rights on behalf of her people.

In about five minutes I would be called to receive my fountain pen, and make a speech.

My mind raced. Joanne realized what was happening and turned to me in horror, asking, “Do you want to leave?”

I knew this public speaking nightmare was happening for a reason. I had been hiding in plain sight for too long.

The president of LALSA said something followed by, “…Salvador Alejandro Litvak!”

Polite applause as I stood up and walked to the front of the room. I received a nice ball point pen, a little different from the others.

“I’m sorry,” the president whispered, “I didn’t realize you were one of us until this morning.”

“I understand,” I whispered back and stepped to the microphone.

“Good evening!” the crowd answered, perking up. The speeches had all been heartfelt, but they had grown a bit familiar by the time I stepped up. Perhaps mine would be different. The performance artist in me enjoyed the expectancy, and I let it hang for a beat.

“Classmates, I have been sitting here, listening to you speak, and I’m profoundly moved by your accomplishments, as well as those of your families in helping you reach this moment.”

“My path here has been a bit different. I was born in Santiago de Chile.”

I said it with a proper accent.

“I came to this country when I was five, and I wanted to fit in. As a Chilean Jew, I realized could pass for a white bread American as soon as I could learn to speak English without an accent, so I learned fast.”

The room was now so quiet, you could hear a single glass being lowered to the table after someone took a drink. I realized the waiters and busboys were listening too.

“The only thing holding me back was my name, Salvador. When I moved to a new town in third grade, I told the teachers to call me Alex, the American version of my middle name Alejandro. I started feeling guilty about it almost as soon as I changed it. I knew I was a coward, but I wanted to fit in.”

People were nodding at me, getting it. A few had tears in their eyes. Joanne was in shock. She didn’t know any of this.

“Year after year, I meant to change my name back, and chickened out. It happened again in college, and again in law school. The folks who put this amazing event together didn’t even know I’d be here because I never went to a LALSA meeting or event before tonight. And I didn’t realize I’d be making this speech until five minutes ago.”

“My friends, I now make a solemn oath before you. As God is my witness, when I start this fall as a first year associate at Skadden Arps, the name on my door will be Salvador Litvak. That’s who I am, and that’s the name I’m going by from this moment on!”

The room erupted. The standing ovation continued during the whole walk back to Joanne’s side, and increased when she gave me a hug. I felt a little bad when the next speaker began by asking, “Oh man, how do you follow that?”

I’ve been Salvador ever since.