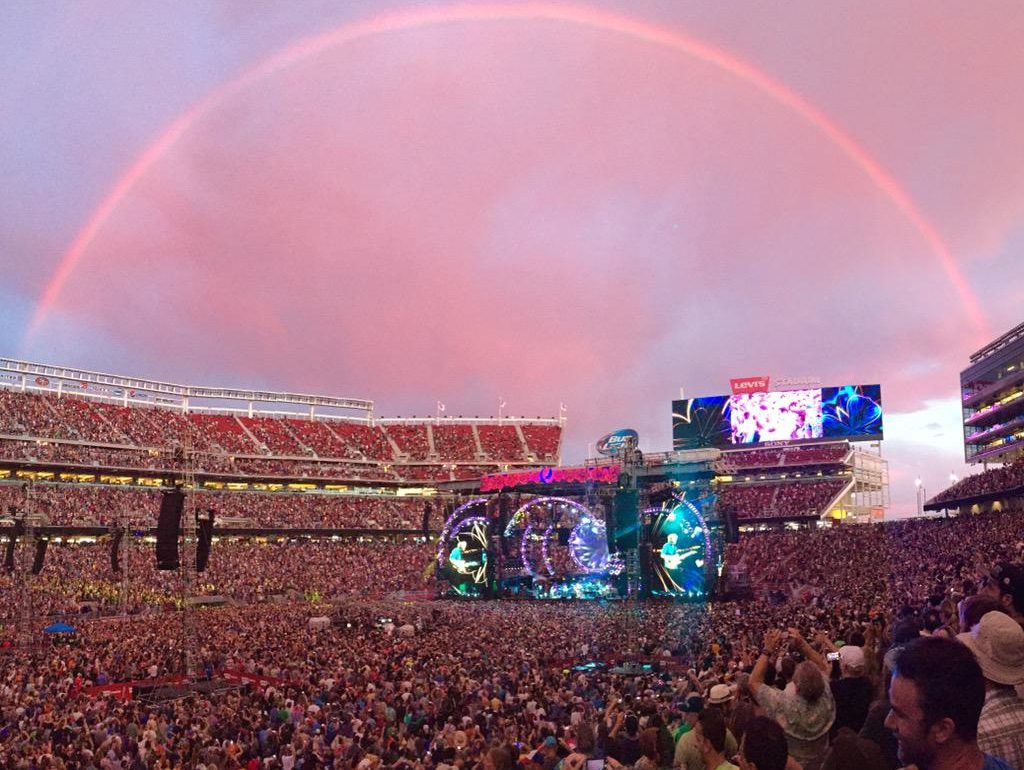 A Miracle So Obvious The Skeptics Looked Silly

Whoever has no heed for the honor of his Creator, it would be better for him if he had never come to this world. And what kind of person evinces a lack of concern for G-d’s honor? Rabbi Abba said, “This refers to one who gazes at a rainbow.” (Chagigah 16a, B. Talmud)

One of the tragedies of my misspent youth is that I missed years of meaningful connection with the wisdom of my tribe because I thought I was “spiritual” and Judaism was not. Lacking that ancient connection, I sought spirituality in meditation, rowing, martial arts, and the Grateful Dead.

This past weekend, my wife Nina and I drove up to Santa Clara, CA for a pair of Grateful Dead shows, billed as the Fare Thee Well Tour. After 50 years of music, the band is saying goodbye to its faithful fans with the two shows in the Bay Area, and three more to come this weekend in Chicago (live stream info).

Though band members continued touring with their own projects, they have not played as the Grateful Dead since 1995, when co-lead singer and guitarist Jerry Garcia died at 53.

When the band announced they would reconvene, it was natural that everyone who could scrape together a ticket – and they were expensive despite the stadium-sized venue – would gather in Santa Clara for the final, west coast shows.

Call it a singalong, a dancealong, or a spiritual revival of a giant rockin’ congregation – we all climbed a few rungs toward heaven.

As the sun set over Levi’s Stadium on the first night, we were also treated to an astounding sight. A rainbow appeared over a corner of the stadium, and began arcing across the sky. Eventually it became a complete and pulsating bow, shifted toward the red end of the spectrum. It was so pronounced that people’s mouths were literally hanging open.

It was the most intense natural phenomenon I’ve ever seen. All 70,000 of us were blown away by that rainbow.

Nina and I took it in, thanked G-d for the manifestation, and then looked away. We actually “fell on our faces” in a gesture of acknowledging our Creator.

It was important to turn away because the Talmud says one may look, but not stare at a rainbow. This teaching has troubled me in the past. It seems so counter-intuitive. Why should we not gaze at something so beautiful, something created by the same hand that made us? And how does gazing at it infringe upon the honor of G-d?

We considered these questions in the context of the most intense rainbow we’d ever seen. We came up with six possible understandings of what we’d witnessed:

1. The Rainbow Was Fake

This is less ridiculous than it sounds because Billboard Magazine reported within hours of the show that the Grateful Dead had spent $50,000 to create the effect. We immediately said “No way!” but plenty of people believed the scurrilous rumor.

The rationalizers sought to dismiss the mystical implications of a rainbow appearing over the Grateful Dead’s final stand.

Secularists are often in a rush to do this, even when the simpler answer is spiritual rather than cynical.

The so-called “Rainbowgate” controversy jumped around the media for a few days, but the fake rainbow story has already been put to rest by Snopes. The rainbow was real.

This is a simple answer if you don’t think about it too hard. Just as it could have been a coincidence that I happened to buy book one of the Talmud on day one of the Daf Yomi cycle, so too could the Bay Area rainbow coincide with the Dead’s final shows.

The odds against my Talmud coincidence were 2,711 to 1. I took its occurrence as a message, and my life was dramatically altered by the journey which led me to become the Accidental Talmudist.

The rainbow’s intensity, placement, and timing could also be a coincidence, but calling it that would shut off further inquiry, and a precious opportunity might be lost. Not my style.

What did you just say, Sal?!?! I know many of our readers are pious people who will cite chapter and verse on G-d’s condemnation of homosexuality. And perhaps that’s a reason to dismiss this possible understanding. Before we move on, however, I will note that there are a few facts along this line of thought that beg consideration.

a) The Supreme Court of the United States had legalized gay marriage on Friday, i.e. the last business day before the Saturday show. The rainbow is the symbol of the gay rights movement, and many people around us made the connection.

b) As a result of this ruling, the growing number of children being raised by gay couples may now become the legitimate offspring of married couples. We don’t take the word “bastard” very seriously anymore, but that was not the case for most of human history. Children and marriage do go together like a horse and carriage.

c) Married homosexuals will now have the same civil liberties the rest of us take for granted, like buying insurance and property together, acting as next-of-kin in hospital and funeral settings, etc. This is extremely significant if it affects you or your family.

d) In a world that now contains millions of gay couples, marriage is far better than casual coupling. After all, participants in gay marriage are signing up to live a holier lifestyle, through commitment and responsibility to a partner, than they would have lived otherwise.

Nevertheless, this whole line of reasoning is a stretch for explaining the rainbow because the ruling affects the whole country, and the rainbow was only seen in the Bay Area. Let us move on.

What?!?! I thought you were moving on, Sal! Now the other half of our readership is freaking out. As I said above, the rainbow was seen locally, not nationally, so the whole tie to gay marriage is highly unlikely.

It is true, however, that the stadium was flying three flags that day: America, California, and the Rainbow – all streaming in the breeze beneath the brilliant, pulsating arc of the red-shifted rainbow. Is it possible G-d was expressing anger over the new law? We can’t dismiss it without some consideration.

A pious person might note that while pretty, the rainbow is a reminder of the flood. G-d destroyed humanity because it had become licentious and riddled with evil. The rainbow would serve as a permanent reminder of G-d’s promise not to destroy us again – at least by water – no matter how much we provoke Him.

I’m now going to dismiss this understanding of the Grateful Dead’s rainbow, however, because G-d did not seem the least bit angry that night. It drizzled for about 30 seconds, the evening was sublime, and the feeling in the stadium was one of miraculous gift. No divine retribution about it.

This understanding met with near universal approval at Levi’s Stadium, and the Deadosphere beyond. I firmly believe Jerry was present, as were the souls of former band members Vince Welnick, Ron “Pigpen” McKernan, Keith Godchaux, and Brent Mydland.

I also believe music might be the rare thing you can take with you from this world (in addition to one’s memories and deeds). There is a rock n’ roll heaven, and they do have a heck of a band there.

Jerry and the heavenly house band might well have been grooving with us Saturday night. Perhaps even helping us along.

I don’t think, however, that Jerry created the rainbow. Jerry’s thing was music and scuba-diving. G-d’s thing is rainbows and other miracles of nature. Therefore…

Let’s bring down the Talmud’s original reasoning for not gazing at a rainbow. It comes from Ezekiel:

In this case, the Hebrew word “kavod” has been translated as “glory” but it is the same word translated as “honor” in Rabbi Abba’s Talmud passage above. The rainbow somehow suggests the markings that give honor to the presence of G-d. But what is G-d’s presence?

G-d is everywhere. We’re in G-d. There is no place in the universe where G-d is not.

Yet G-d does choose to join us sometimes in a more visible way. Like He did for the Jewish people at Mt. Sinai, or as He did more personally for prophets like Ezekiel. We also have records from countless regular folks who’ve had experiences of the Divine, including mine.

When the presence of G-d does appear, we are told repeatedly that it is accompanied by a rainbow effect.

That effect is tied by Scripture to the “honor” of G-d, and our Sages have told us not to stare.

Saturday night I finally understood why we don’t gaze at rainbows.

Imagine for a moment we’re in the desert with the Children of Israel, after receiving Torah at Mt. Sinai. We heard 10 Commandments personally. Moses is taking dictation from G-d for the other 603. In fact, Moses spends so much time in the presence of G-d, that his face has become radiant. When not addressing us in an official capacity, he has to cover his face with a cloth.

Now imagine a typical night in the camp during our 40 years of wandering. Few people work because manna appears every morning. There’s plenty of time to kill. What do we do in the evenings?

Someone forms a band, there’s singing and dancing every night, and I’m hanging out with that crowd.

After a few years of wandering, the house band is really good.

Now imagine Moses’ situation: all the stress of running the operation, keeping a whole nation safe, dealing with a Jewish nationful of complainers. He needs to unwind a bit, and he hears music in the camp.

He walks up. He keeps his face covered, but gets into it. He’s swaying and dancing a bit, and the cloth slips off. Let’s say we’re the people who normally sit in the back of the crowd during his speeches.

Tonight we get a close look at him.

Now, should we stare, and make him feel uncomfortable, or should we take in the sight of our leader, bless him, and look away so he can enjoy the moment?

I believe the latter.

That is why Nina and I looked away when we witnessed G-d unwinding at a Grateful Dead show. Perhaps He was enjoying the music with His pal Jerry, as well as the rest of the heavenly host.

G-d might have preferred to stay incognito, but if He couldn’t help letting a little radiance shine forth when He was beaming, so be it!

And may He be blessed eternally and in all His ways because of it. Hallelujah!