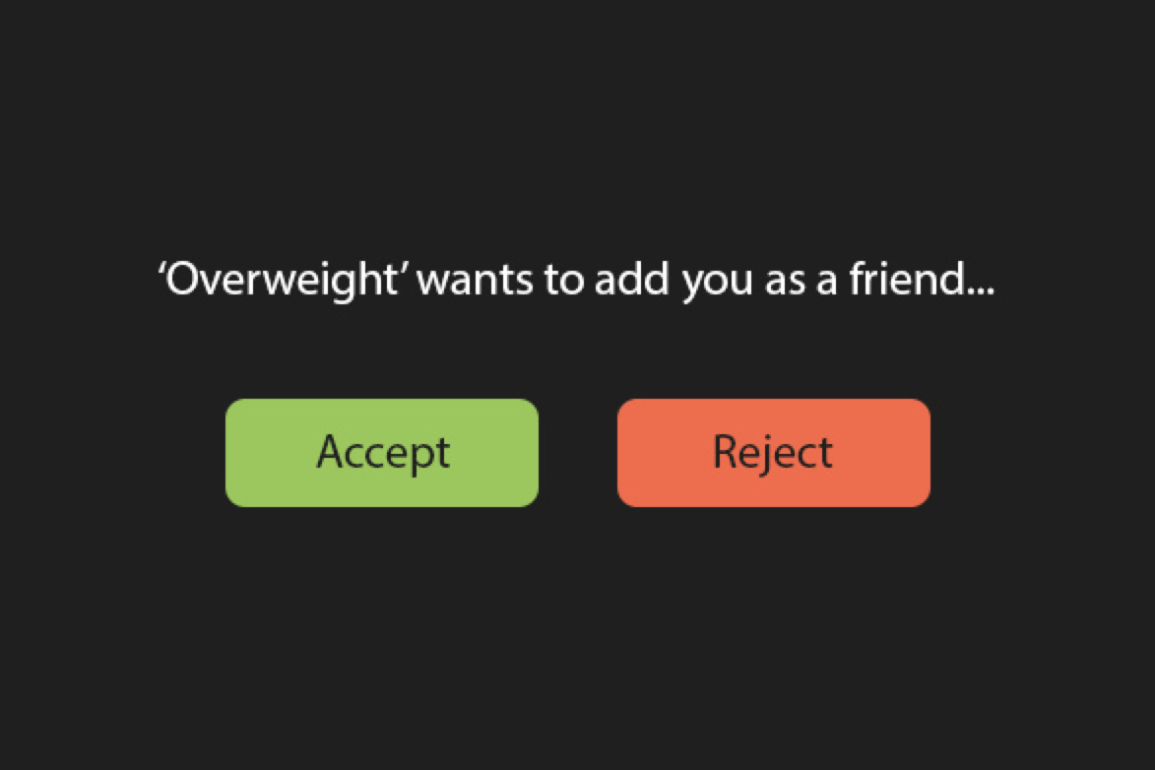 No One Cares That You’re Fat

You clicked on this post for one of two reasons:

1)  You hoped that I could prove the title true.

If you’ve ever traversed the dating world, you know what I’m talking about. There are the girls and guys who decide that you’re ‘not their look’ and you know exactly what they’re referring to. Or those helpful souls who gently point out that you might want to cut back on the chocolate. Because when knights are presented with a line-up of young maidens, they’ll choose the one with the tightest corset.

Even if you’re not in the dating world, you are still thrown those messages. You are fed a steady diet of them. There are those images defining beauty as a collage of particular body shapes and skin qualities.  There are those magazine covers, ‘How To Lose Weight Fast’ and those commercials featuring girls with thigh gaps and guys with 24 packs.

There are those really well-meaning compliments when people say, “You look great!” followed by, “Did you lose weight?”

Regardless of how good of a self-confidence you possess, these things wear away at you.

I’ve heard it from girls of all kinds. Skinny girls. Larger girls. Curvy girls. Flat-chested girls. Curly haired girls. Straight haired girls. Everyone has, at some point or another, felt insecure about some aspect of their looks.

(And I’ve been told that guys of all kinds feel similarly).

If you can’t relate to the word ‘fat’, feel free to replace it with anything. Scrawny. Underweight. Tall. Short. Suffering from a case of Stringy Hair. Carrying the burden of a Jewish Nose.

Whatever ‘your thing’ may be, you notice that people notice.

No matter how ‘societally stunning’ we are, we have all had doubts about our appearance. We have all taken time to ponder the question,

“If I could change anything about my appearance, what would it be?”

For me, the seed of that question was planted in high school.

It’s a question that buried itself deep into the soil of my heart. It grew roots as my friends and I watered it with conversations about who was Popular and who was Hot and who was Sexy.

And I noticed something: no one who was overweight was ever mentioned. Overweight people were pretty much never considered Popular or Hot or Sexy.

And the question of what I would change about my appearance continued growing in grandeur. It developed a trunk. And then leaves. And then fruits.

Fruits which I would chew on while examining myself in the mirror.

“I would get rid of this muffin top.” “I would dissolve my cheeks.” “I would be a size 2” (might as well dream practically).

And, over time, those fruity thoughts fermented and turned acidic.

“You’re fat.” “You’re so fat.” “You shouldn’t wear clothes like that. Better stick to black. Because you’re fat.”

And I accepted these thoughts as legitimate. Because although my doctor told me that I was ‘normal,’ I definitely wasn’t skinny.

I really did have a muffin top. And wide cheeks. And was a size… more than 2.

And so I started dieting. I joined Weight Watchers. I began running. I convinced myself that I was doing this because I wanted to be healthy. That I was taking care of myself. That I was loving myself.

But really, all I was doing was trying to get rid of myself.

Because I wanted there to be less of me when I looked in that mirror. Because less is more, right?

But as hard as I tried, I never could manage to get rid of those muffin tops or cheeks or inches.

I never could manage to get rid of me.

As much weight as I lost, my body just didn’t seem to want to befriend size Small.

And this went on for a while. A long while. Compliments and glances and the numbers on the scale formed a diagnostic tool indicating whether I was at a weight at which I was worthy of being considered beautiful.

At which I was entitled to feel beautiful.

Until one night, when I was speaking with a friend – a truly stunning friend – and we were complaining to each other about what was wrong with our appearances. I lamented my body shape, she agonized over her acne.

“I really don’t. You’re worrying about something which barely exists. And I really would never even notice if you didn’t keep bringing it up all the time.”

And that’s when we realized that we were both being idiots.

Because that unhelpful question of, “if I could change anything about my appearance, what would it be?” had grown to giant sequoia proportions. And we had chosen to rest under its shade.

When really, no one of any consequence saw those things at all.

And we decided then and there, that we were going to work on our self-confidences. Our messages to ourselves.

Because people may notice that you’re fat (or short or whatever else you may be), but no one really cares.

When you stand in front of that mirror and call yourself names and then interact with others, you project that energy. You are less confident, less willing to extend yourself, less giving.

And others can sense that.

Obesity is a rising concern in the world and physical health needs to be a primary focus. But in our concern about physical health, we sometimes forget to take care of our mental health.

Of our emotional health.

It’s a tragedy that complex, capable beings limit their definition of beauty to weight. Weight does indeed matter. But not as much as we think it does.

Because you are more.

People can be cruel. People can shame you for your weight or shape or any other aspect of your person. People can mock you or not want to date you. But those people aren’t your concern. Those people need to get better things to worry about. And you can’t do anything to control other’s superficiality or cruelty.

All you can control is your own outlook.

And we all sometimes feel insecure about the way we look. It happens. We all have those days. Your weight will fluctuate. Your skin will wrinkle.

When I get dressed to go out, and I ask my roommate how I look, she answers back, ‘how do you feel?’

Because honestly, that matters a hundred times more.