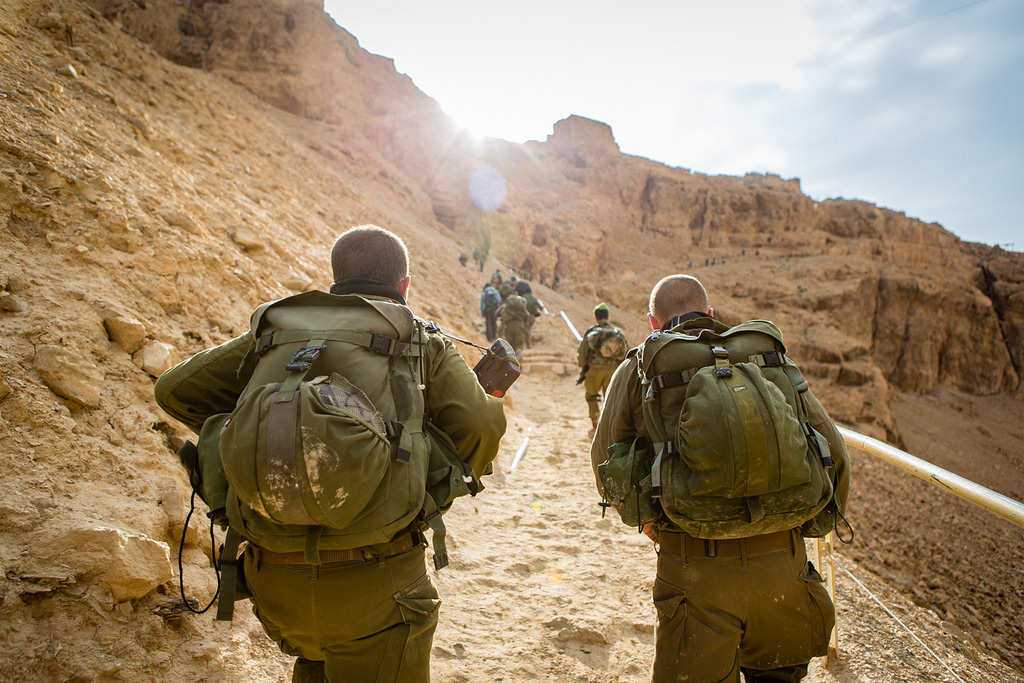 Israel Is A War Zone

I don’t really do conflict. I live my life in a way that toes the line between politically correct and polite. Because of that, Israelis sometimes rub me the wrong way.

Because there is nothing neutral about this place. Israel is a war zone.

You can feel it in the air.

You feel it in the way people speak: harsh and short. While gesticulating.

You feel it in the way people drive: fast and haphazardly. While gesticulating.

‘Just do us a favor. Stay safe,’ my friends tell me.

And I know I am safe; but still, I worry for my country.

In Tel Aviv, my heart drops as I edge around a pool of blood upon the floor. Blood which turns out to be spilled wine. But for a second, my mind sees an attack.

In Jerusalem, I climb to a magnificent rooftop in the Arab quarter of the old city. My view is of the Western Wall, the Al-Aqsa Mosque, and a few children playing next to their father, who is deep in prayer on his knees on the floor. The children play with toy machine guns. For a second, my mind sees a theater performance of fear. In Tzfat, I listen as two Jews yell at each other and fling curses and spittle in each other’s direction. I can just make out the words. For a second, my mind sees hatred.

And I know I am safe; but still, I worry for my country.

The entire country vibrates with overt emotion. While American’s are peaches, Israelis are sabras. Sweet on the inside. Sharp on the outside.

You feel it in the way people throng to the Western Wall: desperate and hopeful. Praying while gesticulating.

The Wall is full. Supplications and troubles are stuffed between the lines of her ancient stones – stones colored and worn smooth from the sweat of the brows of the myriads who made the pilgrimage to pray there.

But as I lean against the Wall and prepare to offer my own prayers, I find that she can’t bare my weight. She can’t take any more. Instead of offering support, the Wall is in dire need of it.

I press both my palms against her and try to serve as a pillar. I try to comfort her through her pain. Because she overflows with the tears of those who seek refuge in her embrace:

The tears of those who are single and can’t seem to find their life partners.

Those who are married but barren.

Those who have children but lack financial stability.

Those who have finances but feel no sense of direction.

Those who have a sense of direction but find their health failing.

Those who are blessed with good health, but who are alone.

The wall cries from the pain of a seemingly never-ending exile.  And it is almost too much to bear. The suffering is too just too potent.

And, overwhelmed with a feeling of helplessness, I close my eyes and listen. I just listen. And the shapes of Jerusalem disappear and the sounds of the Jerusalem intensify and explode with color. With flavor.

The song of the birthright groups singing ‘Dovid melech yisroel’ wildly and with abandon.

The loud sobbing of that quiet woman in the corner.

The wind as it rustles some of the notes on the floor.

The man with the cracking voice yelling the mourners prayer on the other side of the partition.

The congregation answering in unison. ‘Amen.’

Because there is unity here. And although I worry for my country, I know I am safe.

And I open my eyes and see Jews and gentiles from every point on the religious spectrum gathered together.

Because there is unity here. And although I worry for my country, I know I am safe.

And I think back to the half hour right after I saw the blood, as I waited in the bus station. An Israeli guy was waiting for the same bus. At 5am, the city had yet to wake. And yet this boy stood there chewing on pastries and smoking a joint.

Him: (proffering bag) ‘Do you want a rugalach?’

A woman comes over to him and asks him if she could use his phone. She would pay him for the time. He hands it to her with a look that is both harsh and short. ‘Don’t be silly. You don’t have to pay me.’

Me: (digging through my wallet) ‘Shoot. I don’t have enough shekel for the bus fair!’

Him: (while gesticulating) ‘Tsk. What are you talking about, sister? We’re family.’

Me: (awkwardly staring at his hand) ‘Rochel. And it’s really nice to meet you but I’m actually shomer (don’t touch men I’m not related to) (more on that another time).’

And he crushes his joint under his sandals and we get on the bus.

And as that bus fills, a soldier alights and sits in the seat opposite me. Although his weapon and expression would whisper otherwise, he can’t be more than 21.  And every time someone gets on the bus, he jumps up to give them his seat. It does not matter if it’s a man or woman. He shoulders the weight of his gun and stands.

The door opens. Soldier boy jumps up and stands for two stops. He doesn’t even ask. He just stands up and shifts as the newcomer takes her seat. And there is unity here. And although I worry for my country, I know I am safe.

And, still by the Wall, my gaze moves to the stone floor. And the note stares me in the face.

And I lean my head against the stones and the Wall leans back.

I require her stability. She depends upon our unity.

And Israelis are firm and determined and, yes, often obnoxious.

But we are family. And I know I am safe.