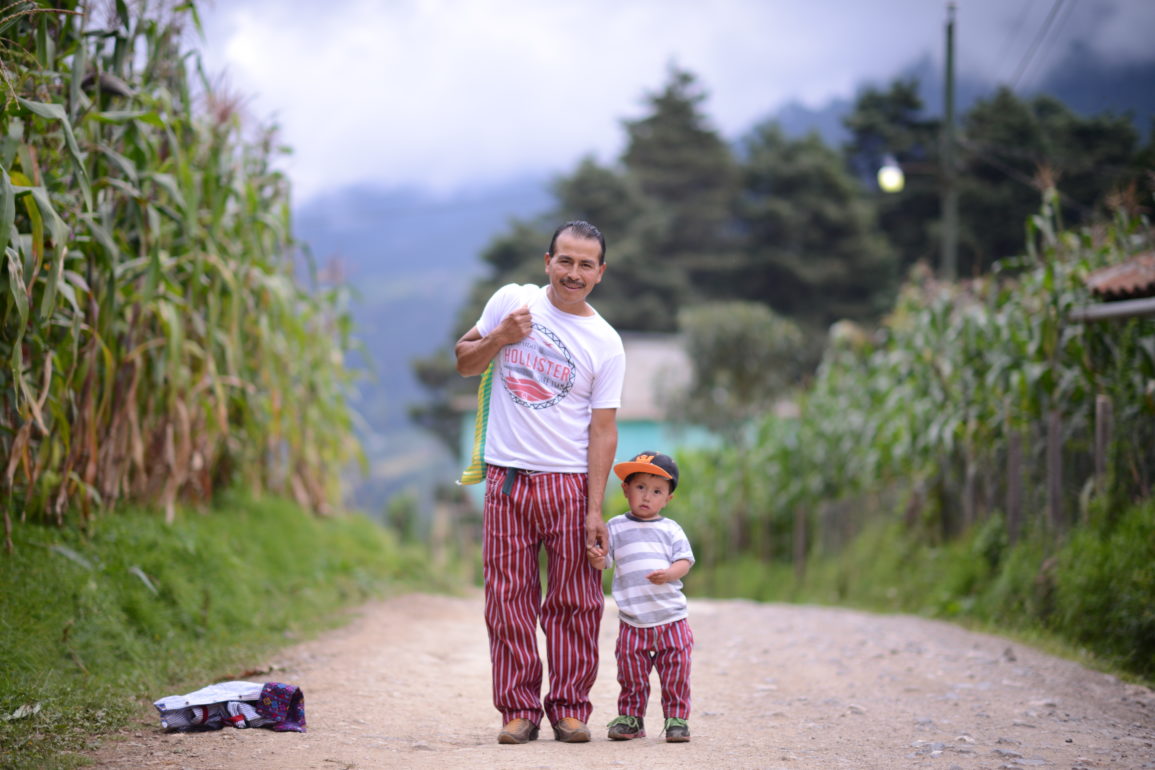 There’s something about not having hot water for showers for a month.

It makes you truly appreciate when you do.

A mere 20-minute walk away and a world apart from San Pedro La Laguna (a tourist hub in Guatemala) is the daughter of a friend of a local Spanish teacher.

“Are you sure you want to sleep here? It’s ok?”

There’s no running water. No electricity. There’s a child standing and staring at me, a bird perched on his head.

There are concrete walls. A fire burning wood. Chickens and dogs in the open room that functions as a kitchen.

And I put my rice to boil on the fire and sit with the family and we exchange Spanish and English words. Girl, Boy, Water, Bread.

Mostly, we sit and say nothing because the extent of their English is more limited than the extent of my Spanish, which is nearly non-existent.

A 10 year old named Hosefa plays with a one-armed, decapitated Barbie. For which she has 3 dresses.

There is a small, battery-powered radio playing. The patriarch turns to me and asks me if I’m sad, triste. (Thank you google translate app).

And we go to sleep at 8. Because it’s dark. And that’s what you do when it’s dark.

I slip my hoodie over my head because I didn’t really plan for this and thus, forgot to bring my pillowcase.

And I really don’t want to get lice. One of my siblings asks me how this is vacation for me. She tells me that the way I travel doesn’t sound relaxing at all.

But the fact remains that that night in that concrete house, I slept from 8:30PM-5:00AM. I don’t know what I did while in Guatemala.

But I know what I thought. Because I wrote it all down. That, at least, I can share…

As I was experiencing it, I kept wishing I could take photos. Write. Record.

Maybe the magic was due in part to my inability to document. Due to its fleeting nature.

(Because we all know we adore things that we can’t hold on to).

As the rest of the hikers in my hiking troupe started off in the morning, they asked me what I would do here, in Middle Of Nowhere, Guatemala.

They needn’t have worried.

Because this is the Guatemala I came for.

The silent one. The slow one.

Sitting on the ground, the children gather around me. Leaning in over my book, babbling in Spanish.

They teach me how to say different parts of the body.

Earrings, I forget how to say.
(Speaking of which, I definitely lost my earrings).
(I always lose my earrings).

And then they taught me pelota, ball. As we played. The need for language then rendered unnecessary.

(Also, it turns out that Duck Duck, Goose is a universal game. Only here it’s Pato, Pato, Goose).

The women taught me Pelo, hair.

Do you want your hair braided? They somehow ask. And we stumble over a conversation about my single status.

Because here, they always speak about my single status.

The one girl is 20 and has been married four years. They can’t seem to grasp that I am nearly 26 and alone.

I watch the women weave weepeels (>400 strands, 1 month to complete a piece, 3 pieces to form a shirt) whilst kneeling on fur on the ground.

I show them my siddur. They show me their well-worn bible.

The children return and hold onto my arms with snotty, dirty hands. At first, I cringe. Not wanting to catch whatever it is that is making them sniff and rub their noses against the insides of their shirts.

And then I relax.

‘Embrace it,’ I tell myself.

And they hug me, throwing their tiny arms around my large neck.

For lunch, almuerzo, I prepare a cucumber, a few tomatoes, some tuna, and a pepper.

Or, what I think is a pepper.

I’d picked it two nights ago from a vine outside of the house in Xexecom, along with a few apples from a nearby tree.

It seems innocent and ripe, but when I cut it, it has black seeds.

So I decide to taste it, just in case.

Fire, fuego. My mouth is on fire.

OhmyG-d, my mouth is on FIRE.

I am alone in the kitchen and try not to cry as a child and a cat watch me. Judging me in my whiteness and preference for salt.

3 hours later, I can still feel the burn on my lips.

Later, I am reading outside of the house when a young girl of nine stands next to me. Her name is Sarita.

(Because I know how to ask how old are you. And what’s your name).

I want to compliment her ‘you look clean’.

Because she is the first clean one I’ve seen all day.

I give her a coke I’d bought for Shabbos and then decided I didn’t need. She grabs my hand and babbles as she takes me… somewhere. Nowhere. Everywhere. She excitedly shows me a pool of water.

Yet later, it grows dark. Shabbos ends, and I go outside to count the stars.

It’s the first night since I’ve arrived that they’re not obliterated by clouds.

You know, I often ask people to detail the most beautiful night sky they’ve ever seen. I think it’s telling. Acts as an insight.

I’ve always thought it depended on the sky. The moon. The number of constellations spotted. Now I realize that it’s dependent on more.

It’s dependent on the day before that night. On the surrounding sounds as you look at that sky. On the people with whom you are gazing.

And tonight, the sky trumps all other skies.

It could be the immediacy of it. The fact that I’m experiencing it now.

I’m crouching in between buildings so I can be in the dark. These stars are shining like they only do on freezing cold nights. There is lightening in the west, lighting up the sky with its stormy wonder.

I normally would be concerned that it will rain tomorrow. Because hiking in the rain is miserable. And I have another… 6 hours to go? Even as I was writing, and recording the sounds, two small children find me in the dark.

They grab onto me. Fight over my hands.

The first word Spanish word I learned may have been Danger, peligros, taught to me by the concerned woman sitting next to me on the plane, but the most important word I’ve learned is definitely estrellas, stars, taught to me by these two little girls whilst sitting, faces upturned, on rocks.

And although I know my hands and face are dirty, I’ve never felt more clean.

I ask them to sing for me. We trade lullabies.

And then, we hear the music coming from the church.

I look on my translating app, Quieres bailar?

Do you want to dance?

We do. I have no idea why they’re playing music at 7:40PM in an empty hall, but we dance. The other hikers asked me what I would do when they left.

“What are you going to do today?” Sometimes, I get a better night’s sleep on hard floors than I do in comforter adorned beds.

And sometimes, I feel more comfortable around people who have worn the same dirty shirt for 3 days than people who are wearing freshly pressed suits.

And it’s now 6:14AM and I’m finishing this piece.  In an hour, I must get up to begin a full day of school.

And I have these thoughts reverberating in my mind.