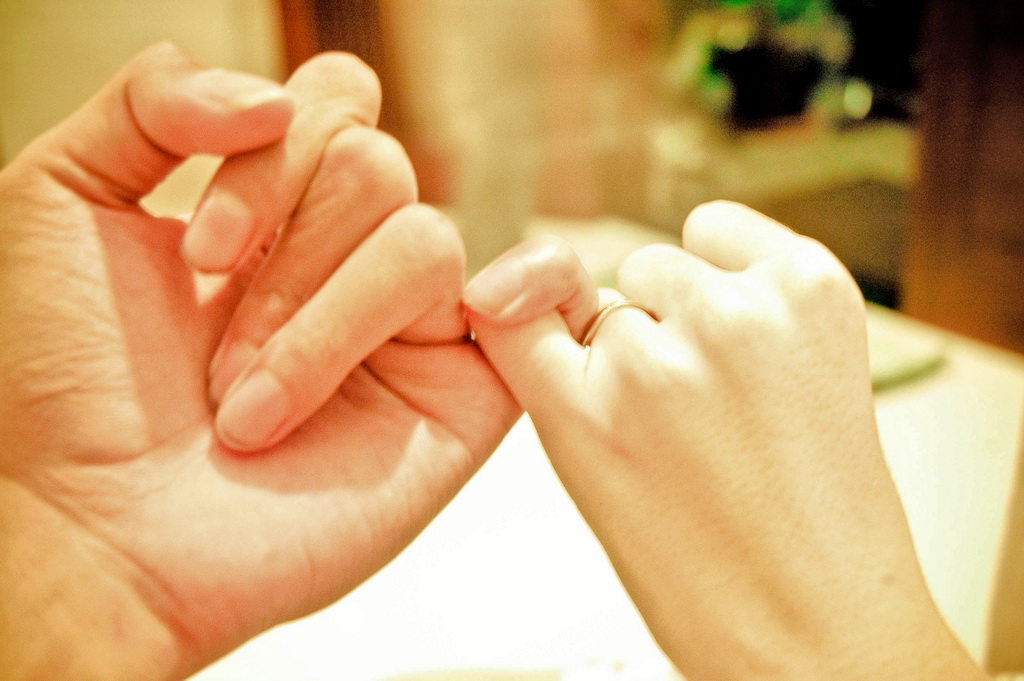 I Can’t Promise I Won’t Hurt You

I stood in the middle school hallway, feeling very much the odd one out. The school children flowed in front of me, backpacks thrown carelessly over one shoulder, books in hand.

Two girls were immersed in an intense conversation. They appeared to be 10? 11? 12?

Their arms were linked.

They were speaking about making their friendship official.

(The Pinky Swear and Blood Pact kind of official).

They were having ‘the talk.’ And there were rules.

“And that means we’ll never hurt each other. Ever.”

And all I could think was, ‘G-d. If only it were that easy.’

If only we could promise the people we love that we would never hurt them. And actually follow through.

If only the people we love could promise us that they would never hurt us. And actually follow through.

But that promise is not in our scope of practice.

Because we are human.

We will, inevitably, offend.

The female sex is often stereotyped as being emotionally unreasonable/unpredictable. There is the popular scene of a man responding to a seemingly benign question with a seemingly benign comment and then being surprised, confused, or frustrated when the female in question storms off in tears.

The stereotype continues to that woman seeking validation from her friends and them echoing the question, ‘how could he be so stupid?’

But the truth of the matter is that all of us are, at times, emotionally unpredictable.

Because people hear words through the lenses of prior experiences.

At times, someone will think their words are complimentary or funny, when those same words are heard by another as hurtful or judgmental.

Sometimes things get lost in translation.

Sometimes, things get lost in general.

In general, we get lost.

I remember once, when I was a kid, I was tickling a friend and she yelled jokingly, ‘stop raping me!’

I drew back immediately. Suddenly cold.

We were kids. We didn’t really know what that word meant. But I knew that it was bad. I’d known someone who’d been raped. I’d known that she’d started hurting herself in response.

I told her that I wanted her to go home.

I told her that she had to go home.

After a few hours, I realized that my friend had not, in fact, been comparing me to a rapist. She was not trying to be insensitive. For her it was just a word.

She just didn’t realize what that word meant to me. The connotations it carried.

I recognized that I had instinctively reacted to my own internal definition of her words rather than her intentions.

I called her and explained why I’d reacted that way. I asked her not to utilize that word in a joking way ever again.

She apologized and never did.

She hadn’t meant to hurt me.

But these things happen.

I don’t believe in the promises of new love. The romantic scene of two lovers standing across from one another under a willow tree or a wedding canopy. The moment they gaze at one another and, unblinkingly, promise to always be there for one another. To protect the other’s heart. To never hurt each other.

I don’t think we can hold hands and promise that we will never hurt each other.

Because one day I will play you my favorite song and it will remind you of a painful memory.

And I will not have meant to hurt you. But it will hurt.

All I can do is look you in the eye and promise that I will try my best.

I will try my best to apologize when I mess up (which, I promise you, I will).

I will try my best to prevent my pride or insecurities from getting in the way of our interactions.

A part of friendship, a part of love, is trying to be aware of the things that bring you joy and endeavoring to bring them into your life.

It is trying to recognize the things that bring you down and endeavoring to shield you from them.

And I am confident that often, I will lift you up.

But I am also confident, if we have a real relationship, that I might disappoint you.

I stand listening to these girls promise to never hurt one another and I think about how real relationships are not that easy.

Real relationships are ambivalence. They are roller coasters with safety belts of trust and commitment.

But fortunately, I can still link arms with you and make our relationship official.

Because I can stand here and promise you: I will try.