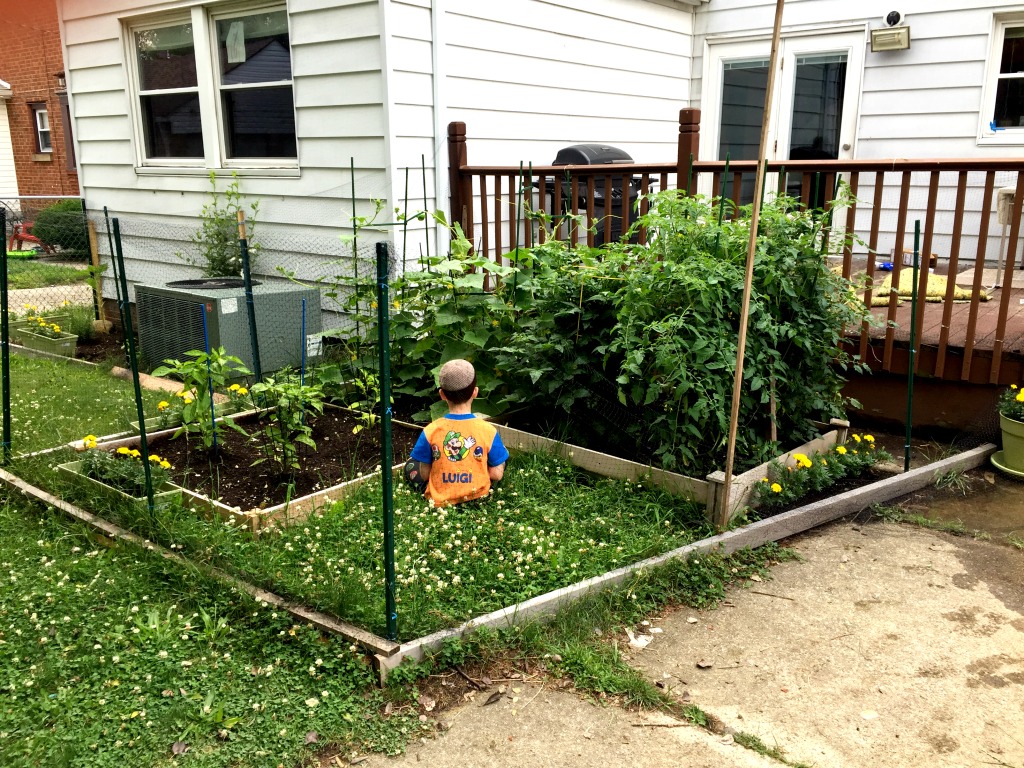 Three Things My Backyard Garden Taught Me About Successful Living

This is the second year I’ve enjoyed a long-awaited backyard vegetable garden. And, like last year, it’s provided me with not only tasty, fresh, organic food to eat, but also food for thought. Because I’m me, of course I want to extrapolate lesson from this experience. Plus it’s Elul, so I’m feeling more even reflective than usual.

Have Low Expectations And Then You Can Be Pleasantly Surprised

I initially planned to have two tomato plants, that’s what I purchased when I bought my seedlings. To my surprise and absolute delight, at least half a dozen new tomato plants sprouted up on their own from seeds that had fallen from last year’s garden.

It hadn’t even occurred to me that all those tomatoes that weren’t picked, that were casually left to rot over the winter, would actually come back as plants. It boggles my mind even though that’s pretty much exactly what plants are programmed to do. It’s still breathtaking to see it in action.

I took two of those little tenacious seedlings and transplanted them from their random locations into the raised bed square containing the other tomato plants. They looked fragile and small next to the hearty store-bought seedlings, and while I obviously was rooting for their survival, I mainly viewed them as an experiment.

Those experimental plants exceeded my expectations, very much so. One of them produced these enormous cherry tomatoes, not quite the size of Roma tomatoes, but bigger than any of the other three plants. And the other one is taller than me now. Nature for the win!

Tomato plants are helpful when it comes to harvesting. When the tomatoes are ripe, their beautiful redness stands out in stark contrast to the leafy green of the plants. Even though I still need to crouch down and crane my neck to search for those delicious fruits nestled toward the middle of the plant, they are easy enough to spot if I check from a few different angles.

Something else that is cool and helpful is that tomatoes that fall off the plant too early, the ones that are still green turn red on the ground. That’s right. They are so helpful that they don’t even need to be attached to the plant to ripen.

Cucumber plants, though, are totally different. Those cucumbers are the same exact color as the leaves of the plant and they are so good at hiding. Even when I look from many different angles I still miss giant cucumbers that are quite literally right in front of my face.

This has led to a much more aggressive style of searching for cucumbers than for tomatoes. I roughly push back leaves and am not tentative about pushing my hands through the plant to find those delicious vegetables.

Also, for cucumbers I need to wear gloves because they are really very prickly, both the plants and the fruits. Tomatoes let me use my bare hands, which results in a delicious planty fragrance which lingers on my hands. Cucumbers are not as friendly, and I have to proceed with caution.

Guard Yourself Adequately From Threats

This year I expanded my garden, clearing away another section of yard for planting rosemary, basil, sunflowers and romaine lettuce. As I was planting the lettuce I had the tingling feeling of doing something which was akin to tempting fate. Lettuce is pretty much the most tempting food for wild creatures, right?

It turned out just as one might expect. I had erected a fence, but there was a miniscule, or so I thought, opening. There was also an enormously vulnerable gap behind the air conditioner, but I didn’t think about that. Not at all. At least not until all but one of my baby sunflowers got knocked over. Then I got a little cranky and tried to close that small gap.

But when I came home from a short vacation to find my beautiful Romaine lettuce plants having been completely consumed, gnawed down to the stubs, I was fuming. And I took action.

I made the most fency fence I could. I fenced off the air conditioner entirely, attaching my two separate gardening areas by a long length of fencing. I also planted marigolds all around my gardens. Well, I bought some box planters and put marigolds in that. Actually digging around all that garden would have been entirely too much effort.

That seemed to do the trick, and for the rest of the season my garden has been mostly safe from the wild backyard critters. Unfortunately, the lone surviving sunflower, one that my son planted in kindergarten, eventually grew tall enough that its top was eaten off by what I assume was a deer. So, I guess, nature for the win again.

I’m fortunate to have the physical reminder of these points, that every time I look out my kitchen window and gaze fondly on the leafy chaos that is my garden, I have the opportunity to contemplate my own improvement.