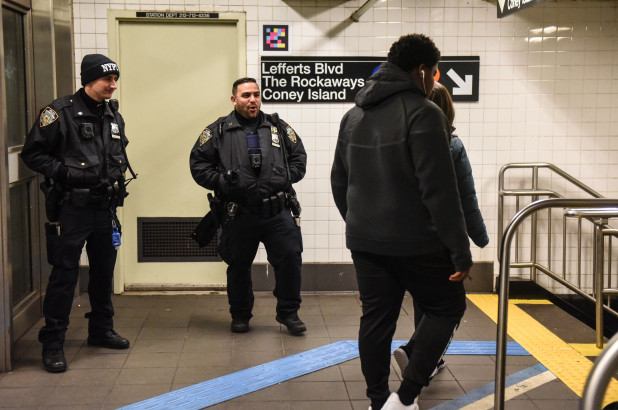 What’s Worse: Breaking The Law Or Hardening Our Hearts?

In theory, I get it. The subways cost something, if you don’t pay it, you’re breaking the law, you’re stealing.

In practice, on the ground, looking at the face of humanity that’s jumping turnstiles, it’s something else entirely.

A day before New Years Eve, I find myself going the wrong way on the subway. Groaning, I get off at Nevins Street to buy another ticket. Irritated at spending the extra money, I dutifully push in my debit card at the ticket machine and wait. As my ticket is coming out of the machine, I hear a voice behind me.

“Do you have an extra swipe or two dollars?” he says, and before I have time to register the question, I turn around and see a young black man sprinting up one set of stairs, and two cops in dark uniforms sprinting down the other, trying to catch him.

“Yeah, you better run!” One cops yells gruffly, tauntingly, as they reach the platform, clearly not able to catch up.

Dumbfounded, I stare at the cop shouting and then down at my arm, still clutching the new Metrocard. Wordlessly, I process the last twenty seconds; the ask for a swipe, the dash away, the taunting call, and me, standing still.

The words of Maimonides in Mishneh Torah 10:5 thunder in my ears as I stand there processing, “If a poor person asks something of you and you do not have anything to give, you should conciliate him with words, and it is forbidden to scold a poor person or to raise one’s voice to him in a shout, because his heart is broken…”

I want to go back in time. I want the man to beg sooner, so I could respond quicker, and avoid this whole event, and avoid the pain I could have absolved.

The cops go back up the stairs, and out into the Brooklyn air. I walk up after them, disturbed.

I want to hand them my Metrocard and ask them that if they see someone else who is need, if they could give them an extra swipe. I want them to know, as a Jew, where I stand. But as I stand there, waiting to get up the nerve, still in shock, they cross the street, and I go back down and take the subway back home.

It takes four hours before the realization hits me: the man wasn’t even breaking the law. He didn’t jump the turnstile. He was just asking for a swipe. He was humiliated and chased because he plead for help.

I mention these occurrences to my husband, and he remarks, quietly, “You know I jumped the turnstile once.” I look at him, both surprised and not. “When was it?” I ask him.

“ A couple of months ago,” he replies, referring to this past difficult summer in which he was unemployed. “We didn’t have any money in our account. I was on my way to a job interview.”

As I ride the subways and buses, I see my husband’s plight in the people jumping the turnstiles. The people I see seem like good, well-meaning people, who need help getting to an interview, a job, school, or back to their families. I do not feel threatened by the people I see doing this. Rather, I feel on frightened and dismayed by the newly stationed police, with their arms crossed, watching to see who will cross the line.

As a third-generation Holocaust survivor, my mind flashes back to all the nonJews who stuck to their necks out to help Jews in times of need. Schindler and Raoul Wallenberg are two of the most well-known, but the Holocaust history books are filled with people who dug a little deeper into their pockets, or moved aside space secretly in their homes, or who fibbed on the identity of the Jews they worked with, to help people who, by the luck of their circumstance and identity, were persecuted.

The crime for the one asking for a handout, it seems, was for being poor, for not being able to afford to get to where he needs to go. The crime for America is that we are losing our hearts.

The Torah advises that “When there is a destitute among you..you shall not harden your heart and you shall not shut your hand against your destitute brother.”(Devarim 15:7) for it knows the inhumane consequence of what will happen to us and our compassion if we close our hands and thus our hearts.

My heart breaks for the humiliated people needing a subway or bus ride, but it also breaks for America. The real cost to New York City is not the millions that is said to have been lost from turnstile jumpers. The cost to the city is in the contraction of our hearts and our ability to respond to other people’s need.

In Vayikra Rabbah 34:7, Maimonides bellows what is still a contemporary truth in our approach to the suffering: “The rich man may say to the poor one: “Why don’t you go out and work at a job? Look at those legs! Look at those muscles! Look what a great belly you have!” The Holy One will then say to the rich man: Is it not enough for you that you gave him nothing of yours! Must you also cast a mocking eye on what I gave him?!”

I don’t give nearly as much charity as I would like. I resist giving much or any charity to random requests on the street. But a subway ride? I’ll keep my hand on my card, my eyes searching to make eye contact with wandering souls, who are just hoping for some help to get from one place to another in order to improve their lot. I know how hard it can be some days to find $2.75.  After everything that’s been done for me, it’s the least that I could do to help out.