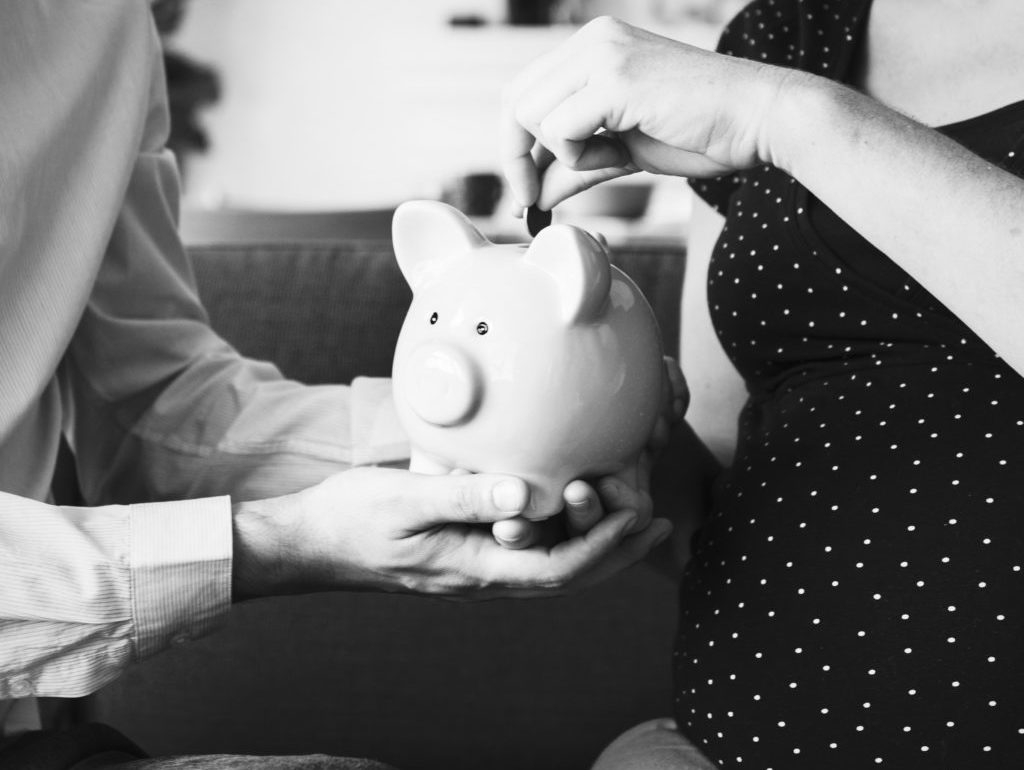 Being Broke Is Halfway To Being Rich

The contractions come, and go.

Weaving through my apartment, holding my sides, my husband weaves along with me, unsure, hands open, ready to catch something, if directed. Anything.

As I sway, I feel it. The mess of life. It’s almost unbearable. I need clarity, something graspable.

He stands at attention. What will it be?

“We need to go over our finances,” I say.

He laughs, starts, then looks at me, concerned. “Are you serious?”

We both know that whatever the numbers add up to be, it will not be good. This is ok by me. The palpability of knowing entices me.

Our past year spent studying at yeshiva and seminary was spiritually, but not financially, fruitful.  There was no dough-rolling or dollar-bill-flinging in our high-rent Jerusalem apartment.

My devoted husband, to his credit, had landed a job at the Jerusalem Post a few weeks prior. Except that when he went in the first day of his job, they told him that his job no longer existed. Kaput. They had simply decided to erase it from existence. Only in Israel could a human enter in the morning awaiting his first assigned newspaper task and walk out less than an hour later, a jobless shape of a man.

A series of miracles transpired afterwards, in which a job out in the rolling hills of Herziliya, over three hours away, wanted his full-time marketing advice. A start-up. In the far-off hills. To begin in a couple of weeks. The promise of money just beyond his grasp.

So here he was. A father-to-be in a matter of hours, with only a promise of money in the near future, the traditional notion of a man who holds a roof over the heads of his clan bearing down on him. And in the midst of that sense of unbeing, his wife- between each contraction- was asking him to calculate their dismal coins remaining. Could he do that?

Of course he would.

So we wrote a list.  The remaining expenses compared with the remaining dollars, plus the money we owed. We circled the final amount, and Husband sunk into the couch in despair. It was bad.

I, on the other hand, felt elated. “Okay, now we know!” I said cheerfully, feeling more capable to bring another human being into this world. Wasn’t knowing better than not knowing? Isn’t it better to know you are screwed than to think that you are probably going to be screwed any moment?

Fast forward many years, three children later, and thousands of dollars per month in tuition bills. We are doing so much better than we were, over seven years ago, with many more possessions and accomplishments and footholds. Yet the struggle remains.

What do we count? What do we save? What are the numbers? Is it better to know than not to know? And even if we scrimp and save and hold tightly onto each coin, each dollar, slowly preparing for the day in which we can be assured we have enough, is that the best way to live?

The accumulation of things and needs and wants congeals and builds at every moment, exponentially. The struggle, I find, is to search through my cupboard to uncover the food I already possess, the little odds and ends that, creatively cooked together, can add up to more than enough for all of our bellies.

Sometimes it’s when we feel most broke, most tight on cash, that we can look ourselves in the mirror and say, we can do this. We have enough. We have nothing and everything. And we will be more than fine.

Dedicated to my favorite money books, who have inspired me in our search for knowing what money is ours and how to leave simply and well, Worth It by Amanda Steinberg and Women and Money by Suze Orman. Also to my sister, Deb Felz, who is writing about how to invest in The Super-Easy Guide to Investing For Those Who Know Nothing About It. We can conquer our money and prosper! Right?

Photo by rawpixel on Unsplash