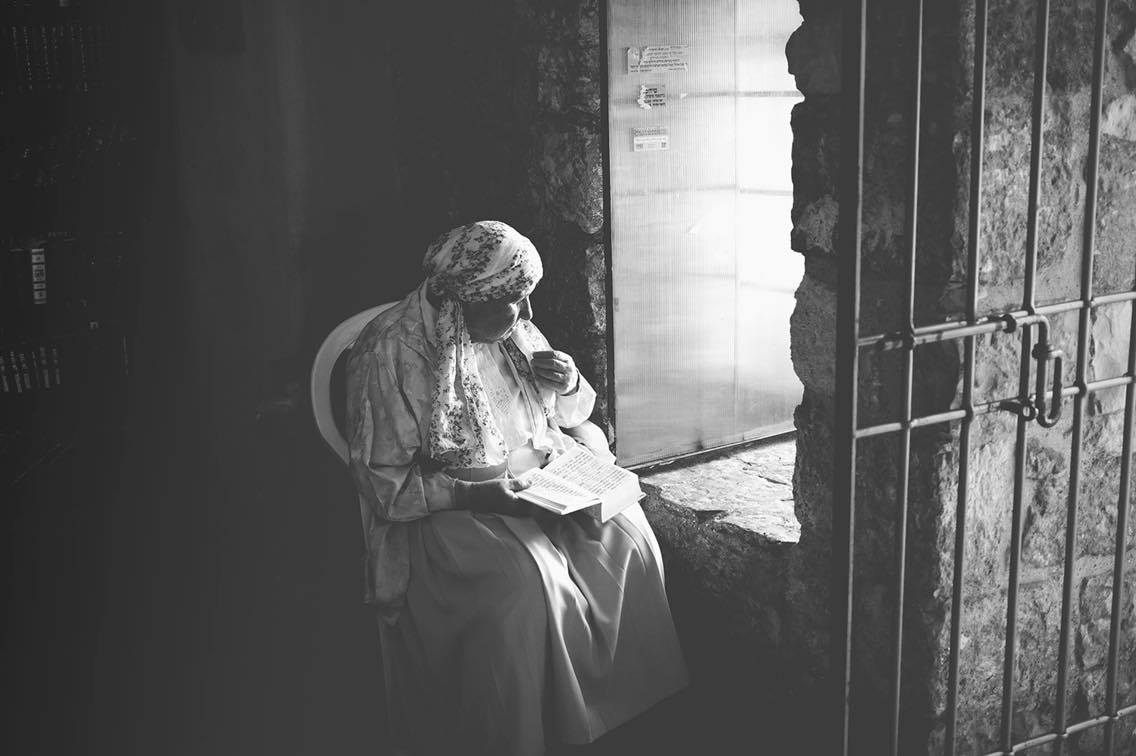 We were, and it worried her to no end.

“How will the girls ever meet young men in these single-gender schools of theirs,” we could hear her complaining to our parents from behind closed doors. “Why must they wear these horrible long skirts?”

“You should go to a discotheque or a bar,” she urged me when I was thirteen. “Wear something pretty. Dance. Meet boys.”

When I tried to explain that the bar scene today is nothing like the prim-and-proper, Mozart-and-chaperoned-waltzing-while-reciting-poetry dance parties of her 1920’s youth, she flicked her hand dismissively. “Fine, so go somewhere else! Anywhere else!”

My Baba Ida wasn’t an easy person to dismiss. One of my favorite stories about her, and one that I begged to hear over and over and over again as a kid, recalled the time she visited my father, Natan Sharansky, in the Soviet Gulag. As he was taken from his cell and led towards the visiting area, my father could already hear her voice ringing through the silent halls. “What do you mean I can’t take strawberries to my son? This is a disgrace! It’s inhumane! How dare you -”

My father and his jailer turned a corner, and there she was, all five feet of her. “Oh, hello Tolya,” she said, before turning right back to look down at the prison manager who towered way over her. “How dare you stop me! I will speak to your superiors!”

We didn’t need stories to remind us that my grandmother shouldn’t be crossed. She was like the sun: Warm, generous, and relentlessly fiery. People always turned to her for empathy and guidance, and she gave it to them – no holds barred.

“Don’t be an idiot, you should fire him at once,” we could hear her dictating as we walked up the stairs to her apartment. Or “You should tell your son it’s unacceptable!” or “Call the insurance company at once!” And always, always, followed by an imperious “Enough, I have to go, my children are here,” and punctuated by the little thud of a phone hanging up.

The face she turned to us, once we walked in, held nothing but love. My sister and I were her darlings, too precious to berate or to guide. She saved her vocal worries about our religiosity for our parents – if worry is the right word for so decisive a dislike.

I like to think that Baba Ida’s concerns eased a little after her eyesight deteriorated. She remained determinedly independent in most ways, walking miles a day on her porch just to keep her strength. But she couldn’t see. Books slipped away from her, as did the wonder of nature. The world shrunk into a smaller place.

But her loss became an opening, an invitation to grow closer. Because there I was, seeing and feeling and thinking too strongly, a young teenager with too much to share. And there she was, hungry to experience.

I spent hours describing the world to her.  It was the world as I lived it, complete with sights and books and lazy pondering, chats with friends and the colors of the leaves. And it included God, too, because He was and is entwined in who I am.

I think my grandmother reevaluated her point of view as she got to know me better. But whether she changed or not, I know that I did. The more I struggled to find the perfect words to describe what I saw, the more I noticed in the world around me. And the more I shared about my inner journeys, the more I understood about myself. The world expanded, and I grew with it, sitting there with my Baba Ida by my side.

One afternoon we reclined on her veranda, and I described the sunlight on the distant trees. The wind blew in the eucalyptuses, and bees hummed in the flower beds below.

“So why do you believe in God,” she asked me, for once in honest curiosity. I was fifteen at the time, and probably gave some sort of typical fifteen-year-old answer. We sat silently, then, listening to the crows across the street.

“What do you believe in, Babushka,” I asked eventually. She didn’t answer.

“I believe in the beauty,” she said some minutes later, and I turned to her. Her eyes were wide and very clear. “That can exist between people, in friendship, in kindness, in love.”

These words stayed with me. But their memory hurt, because there wasn’t time for many words to follow. My grandmother lost her consciousness during the dreadful Passover of 2002, days after a terrorist killed thirty men, woman and children in a Netanya hotel. The woman who fiercely exclaimed that the government “Must react!” faded into a small, still body. The elegant pianist who waltzed through Odessa in her youth was gone. The strong survivor who battled exile and starvation through World War II was gone. The fearless mother who rebuked a Soviet prison manager without hesitation was gone. All that remained were five feet of flesh, and the cold, rubbery hands I held tight in mine.

We had one last month to hold on to those hands. And I did, describing anything I could think of, pouring everything I was into my Baba Ida’s ears. “The flowers started to bloom, Babushka,” I sat and whispered, the dead smell of the ward heavy between us. “Though it’s too early for the pomegranate trees to blossom yet.”

Around us, soldiers fought and died and gained victories. Terrorists struck. Statements were made. But between the two of us, only my words existed, and the words I couldn’t speak. I stubbornly told myself that there was still hope, but my heart whispered otherwise. “I love you Babushka,” it cried in silence. “Why are you slipping away from me?”

When my grandmother died I was reciting the morning prayer at school, the same Orthodox school she so disliked. I used to recite a Psalm as a prayer for her health every morning, but on that day, it tasted clumsy and wrong on my lips. I wasn’t surprised, not really, when I arrived home that afternoon and heard the news.

At first, I thought about my Baba Ida all the time. When the Pomegranates bloomed I was angry: How could anything be so lovely while my Baba Ida wasn’t there? When the flowers ripened and rounded into fruits, I ached. The pomegranates were like a vestige of summer, one last drop of heat and sensuality that we could carry with us as the seasons changed. But I had no one to describe them to, because my Baba Ida was dead.

With time, the memory grew softer and lighter. It refreshed me, like a sweet breeze, in the oddest of times. I would labor over a description in an article, seeking just the right word, and my grandmother’s expectant silence would wash upon me. I would see strangers smiling at each other, and she’d laugh with joy.

I remembered my grandmother as I stood under the chupa. Do you see me now, Baba Ida, I thought. Do you see that I am well and happy and in love, long skirts and all? You don’t need to worry any more, dearest. My religion didn’t make me less alive.

There was nothing soft, though, about the memory that hit me when we visited Moscow. After years of stories, my parents finally took us to see the battlegrounds of their youth. “Here is where we demonstrated against the regime,” my father said. “Here is where I was arrested, and here is where I was imprisoned, where the KGB tried to break me, using fear.”

The more we heard and understood about the reality of life in the Soviet Union, the more I thought of that afternoon in my grandma’s veranda. “I believe in the beauty that can exist between people,” she said, and what seemed almost trivial in sunny Jerusalem, became miraculous in the cold Russian streets. The feeling of peace on that warm afternoon bled out of the memory. All that remained was the astonishing fact that my grandmother said these words after living through hell.

Have you watched “Life of Others”? Were you shaken by the reality it described – the constant fear, the threat of imprisonment, not knowing who might sell you out and why? The reality in Stalin’s Russia was far, far worse. People disappeared in droves, friends turned against friends, children told on their parents. Little grudges between neighbors could lead to false accusations. And accusations, false or not, could lead to torture – and to death.

Yet somehow, my grandmother lived through all of that, and still believed in love and friendship. She saw the ugliness we are capable of, but went on citing beauty as her credo.

In this light, my grandmother’s conversations with her friends took on new meaning. She was sometimes imperious and decisive and harsh – because she cared so deeply, and wouldn’t let them get away with being less than they could be. She expected them to rise to every challenge – and she was right there to help them, all along.

I don’t have my grandmother’s talent for friendships. Is it because I didn’t have to work as hard for anything? Is it that without knowing darkness, one is not as capable of cherishing the light?

I try, and I try, and I hear my Baba Ida’s voice beside me. I hear her passing on the faith she held so dear. My grandmother failed to convert me out of my religion, but maybe, just maybe, she converted me into hers.

You see, my grandmother wasn’t religious.

But when it came to the God she believed in, she was the most religious of us all.