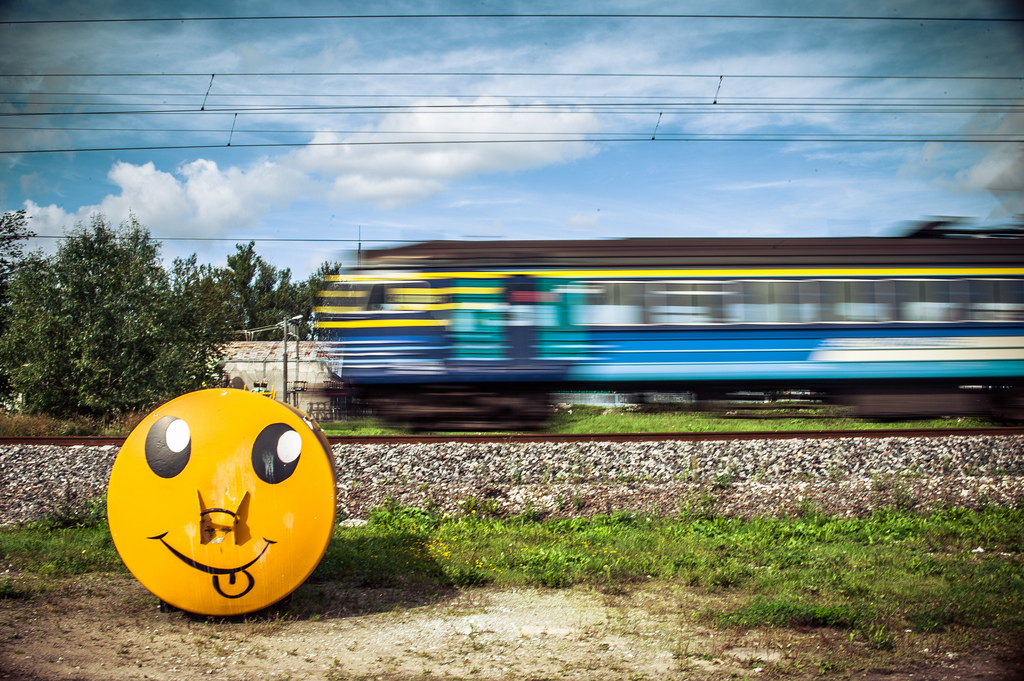 Emoji: The Language Of Love (And Torah)

Oh emoji, how do I love thee? Let me count the ways. Beloved language of symbols. Where words fall short, your wacky imagery fills me up.

I love emoji for the same reason I love dance. In addition to performing, I teach Zumba and use non-verbal cueing as much as possible. Doing so effects an instantaneous healing on my word-addled soul. It is nourishing. It gives me a way to communicate when words fail me, which they do, often.

I am a poet. I perform poetry. I write poetry for the page. I teach poetry. So much of my life is dedicated to the deep contemplation of words, words words. Even so, I can say “apple” with all the devotion I can muster, and still, an apple is never going to fall from my mouth.

Yet I persist in believing that words have the power to create, to speak reality into being. I know this in my bones. I don’t fully understand how electricity works, but I know that it does. As such, I still avail myself of light switches when I need to see. I know that we create our own reality in terms of our personal experience through our perspective and perception.

I also know that I am trapped in English, which is awkward and limited. I have always craved a truer tongue. Even in my total ignorance and absolute detachment from my Jewish roots, which is how I spent most of my life, I knew there had to be a more undiluted word spectrum available for me. I began learning Hebrew in early 2012.

My mind is exiled; my mind is colonized, and still: I love the strange and clumsy attempts we make to connect with one another through words. We humans do the best we can with the tools we have, and I love humanity for it. It endears me to the human race.

Forgive me for going deep. We are talking about emoji here, after all. Isn’t it somewhat silly to create Emoji Dvar Torah? Of course it is. So why am I providing an in-depth exegesis on my Emoji Dvrei Torah? First and foremost, I want to thank Erika Dreifus, PhD, of Fig Tree Books and Harrison Solow, PhD and Pushcart Prize winner, for calling this piece into being with their questions about my Emoji Dvrei Torah. I hope you two highly intelligent ladies are brought some measure of satisfaction, or at least a laugh or two! I thank you from the bottom of my heart for inspiring me to write this piece.

Some personal context: 1) I was almost completely deaf until I was five years old, when a minor surgery corrected my hearing. 2) Dance is my first language. Ok, let’s do this:

In the Hasidic and Mystical tradition, it is believed that during the month of Elul, (Around September on the Gregorian Calendar,) G-d’s presence is closer to us, and we may be more intimately acquainted. My amazing and beloved teacher from the Happy Minyan in Los Angeles, David Sacks, (he’s the guy who truly brought the beauty of Torah into my life,) described it as “G-d’s Office Hours.”

The Baal Shem Tov is said to have coined the phrase “The King is in the Field” to capture this closeness. This Emoji Dvar Torah was meant to ease readers into my silliness by simply replacing each noun with an emoji symbol. So the crown represents the king, and that emoji night portrait is the field. Now I start getting a bit more elaborate. For my second Hevria post, I shared a poem written in the voice of Sarah Imeinu. As this post fell on October 1st 2014, it was smack dab in the middle of the Days of Awe. It came hot on the heels of Rosh Hashana, during which we read portions of Parsha Vayeira.

This Emoji Dvar Torah was my emoji retelling of Parsha Vayeira’s beginning, Genesis 18:1, with a bit of wiggle room at the beginning and end. I have to tell you that I am especially sentimental about this parsha, as it is the first parsha that I ever began learning…in Hebrew or otherwise. It was the opening parsha in a special beginners’ Chumash given to me by the dear Rabbi Avrom (yes, notice the name, because nothing is random…) Czapnik at the Jewish Learning Exchange in Los Angeles. To say he is an angel in my life is an understatement.

To fully appreciate the beauty of this moment, bear in mind that this Chumash reader just had a very few parshiot (think “Baby’s First Chumash”) for absolute beginners such as myself. I brought it with me to Israel, and was tutored one-on-one by the glorious Aliza. Guess which parsha we worked on? This one right here, Vayeirea. (Right about now I am plotzing—aka feeling an emotional outburst—that could only truly be captured in emojis, because words fail me. Picture a rainbow of hearts and a lightning bolt or ten. I am overwhelmed with gratitude.)

This was also (there are NO coincidences…) the first bit of Torah that I read aloud, in a class in Yerushalayim with holy Rebbetzin Tzipporah Heller, who was incredibly supportive as I stumbled and sweated my way through a line or two, which probably took me five minutes to read. Picture me in my thirties in a classroom of 18 year old girls who could read Hebrew like they had been reading it since they were five…which they had. I started learning Hebrew in January of 2012. This was all happening in summer of 2012. I had found my way to Yisroel. Humbling doesn’t come close to describing the feeling. Rebbetzin Heller clapped for me when I finished. I cried a teeny bit, because gevaldig.

So yeah, I am a bit sentimental about Parsha Vayeira. Here’s the lowdown: This was the original inspirado. The first Emoji Dvar Torah I ever created. Before Hevria existed. A few months ago, I was thinking about Bereisheit, aka Genesis…which is nothing new for me. I spend a lot of time thinking about the beginning of the beginning, aka Bereisheit. I have written an entire book on this subject. I have danced dances on this subject. Thoughts of the garden, of the serpent, of Adam and Eve…they consume and fascinate me. I was messing around with Twitter, wondering how I could tell the entire story of Adam and Eve in so few characters. Then got the idea to tell this story in emoji. The rest is history. Albeit ludicrous, it is my little ludicrous history.

I mean!! I was simply delighted with this creation. I wished that I had a place besides Twitter to share these Emoji Dvrei Torah. Somewhere online where other weirdos would appreciate my weirdness.

When Hevria swept into my life—and me off my feet—by the time my second post came around in September/Elul, I had put two and two together and decided that since my desires had been directly fulfilled, I would include an Emoji Dvar Torah at the end of each post.

This post, wherein I discuss Parsha Bereisheit, (as that was the Weekly Parsha,) happened to fall right on my Gregorian birthday. What a delicious gift! No wonder I am so obsessed with this Parsha. Including my very first Emoji Dvar Torah, which was on the same subject, was a no-brainer.

I was thinking a lot about the Parsha we had just completed, Parsha Noach. I had been listening to an extraordinary shiur from Rabbi David Ingber of Romemu in NYC on the weekly parsha, and was particularly moved by what he had to say about G-d’s instructions to line both the inside and outside of the ark with pitch.

Well, I certainly had to give you an Emoji Dvar Torah with this post! This is another one of my favorites. I am endlessly fascinated by the Sephirot and Etz Chayim, aka the Tree of Life. A great deal of my life, passion, time and energy is spent on deep study of this. As in most areas, I am still a fool with much to learn. So much to learn. So much.

If you are someone who dabbles in the mystical but has no Jewish contextualization, and you would like to understand what this represents, I would say that there is a loose, loose correlation between the energetic map of the Sephirot as laid out on the Etz Chayim and the energetic map of the chakras. Just as each chakra has its own energy, nature and essence to bring into balance, each Sephira has its own quality, power and effect.

Basically, this stuff is my jam. I want to encourage you to consider counting the omer this year, no matter what your religious or spiritual background. It is a 7 week process occurring between Pesach and Shavuous, and it allows you to become intimately acquainted with each (of the lower) Sephirot on their own and through the context of each other. Rabbi Simon Jacobson of The Meaningful Life Center has an excellent guide available, and even a free app!

Just a few years ago, (like, three,) I experienced my very first legit Pesach Seder, I am forever indebted to Israel Rubinstein and his entire family for giving me that invaluable, life-altering gift. I made it through the whole second seder, and no doubt, Izzy could see the holy sparks that had been raised within me, and encouraged me to begin counting the omer, which I had never heard of before, of course, and handed me Rabbi Jacobson’s aforementioned guide. The experience changed my life, and I was shocked to find that this ancient technique had all the self-refinement tools anyone could hope for, and was totally applicable in a contemporary context.

I am deeply in love with every Sephira, and as you can imagine, English falls woefully short of capturing their essence. Thus, I will provide multiple translations in hopes that you can at least catch a whiff.